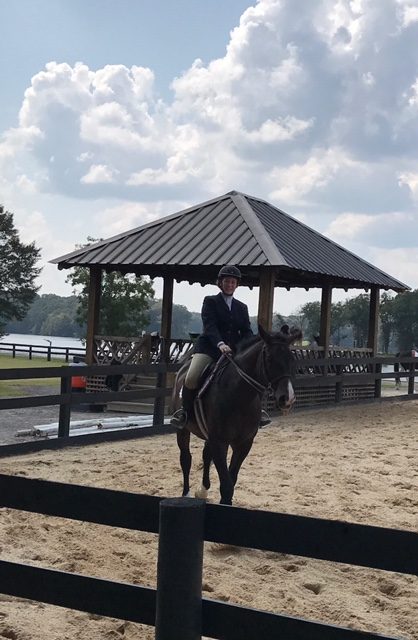 Julia Champagne and Quintessential at a scrimmage earlier in the season.

Mississippi College’s equestrian team gallops into its 11th season as one of the South’s premier squads.

Over the years, MC student-athletes like Meredith Guider of Hinds County and Erica Reynolds of Dallas, Texas shined in the region to reach national competitions.

Riders from schools like Auburn, Alabama and Berry College in Georgia are among MC opponents on the road. Matches take MC to Auburn October 28, and November 11-12 to an IHSA show at Berry College. The MC squad returns to Auburn February 3, and competes in an Alabama event February 10.

Practices keep the Lady Choctaws and their horses incredibly busy at Providence Hill Farm, a 15-minute drive from the Clinton campus.

Providence Hill Farm owner Jamie Planck Martin is enthused about the team’s prospects as the new season gets a jump-start.

“This is the largest and most diverse team that we’ve ever had,” says Martin, a Ridgeland attorney. “We are thrilled to have all of these students from all over the country, many of whom came to Mississippi College for this team.”

Beautiful horses with interesting names like Hale Bopp, Laddie, Mac, Quinn and Capiche have been a hallmark of the university’s equestrian team for a decade. “Boppie” was among the stars of the family-friendly movie “A Gift Horse” filmed at Providence Hill Farm a couple of years ago.

Mississippi College is building upon its successes of past seasons with its diverse roster.

Some riders are from metro Jackson communities. Bailey Welch, Jessica Patch, Meredith Henry and Anna Gosa are all Madison residents. Mckay Criswell is from Jackson, while Julia Champagne is a Clintonian. Katelyn Stone of Hattiesburg rounds out the seven Mississippians on the roster.

Other student-athletes come from states as far away as Colorado, Michigan and Illinois. MC riders recruited from Florida, Tennessee, Alabama, Texas, Georgia and Louisiana add depth to the team.

Julia Champagne of Clinton began taking riding lessons at the 2,000-acre farm three years ago for an MC physical education class. Coach Powers encouraged her to try out for the team last spring, and she was selected. It’s been a fun and fast ride ever since.

“I have really loved getting to ride all the amazing horses we have,” Julia said. “It’s been so neat to be part of a talented team.”

Champagne likes to saddle up a horse named Quintessential during Fall practices. “I have learned so much through this program about discipline and self-confidence. It’s been such a growing experience for me.”

A 22-year-old English writing major, Julia isn’t the only one feeling blessed to be part of the Blue & Gold team.

“We have an incredible opportunity to ride at Providence Hill Farm and train on a variety of different horses,” says 18-year-old freshman Ellie Kate Tradup. The opportunity for the public relations major to join the equestrian team was a huge selling point for the Dallas, Texas resident to become an MC Choctaw.

Tradup appreciates the lessons she’s learning at practices as riders get ready for a series of horse shows. “Coach Powers is incredibly gifted when it comes to reading, not only the riders, but the horses, too.,” Ellie says. “She turns it into effective training.”

Mississippi College Vice President for Enrollment Services and Dean of Students Jim Turcotte oversees the equestrian, archery, bass fishing and clay shooting teams. He can be reached at 601-925-3315 or turcotte@mc.edu for details on outdoors programs at the Baptist-affiliated university in Clinton.