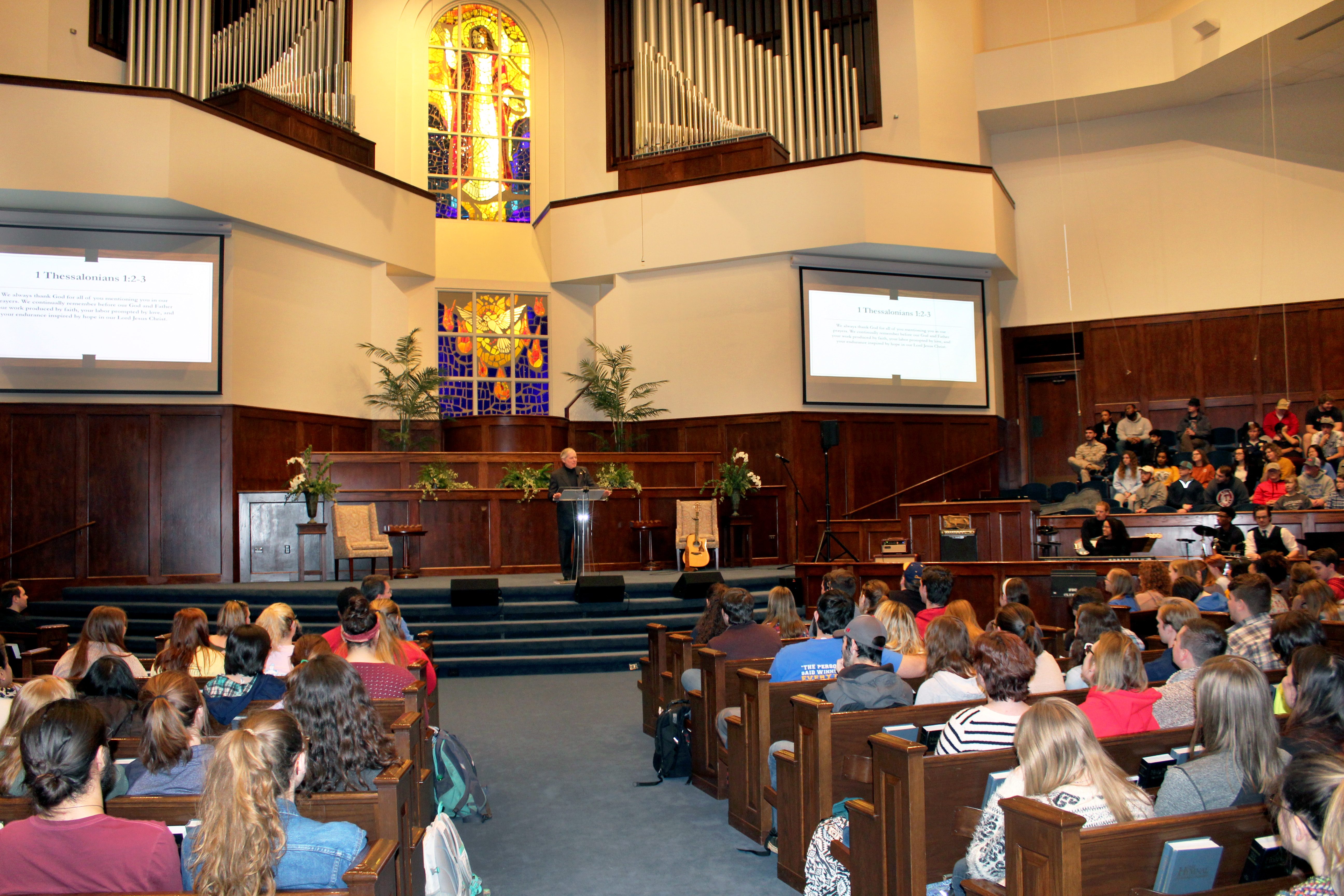 The setting Tuesday at First Baptist Church Clinton was appropriate as hundreds of students looked on. Headlining a Founder’s Day event, President Lee Royce pointed to some of the key values that embody the Christian university’s bedrock beliefs in the 21st Century.

He spoke after students watched two new videos addressing what Mississippi College stands for in 2018 as the institution marks its 192nd birthday.

“Excellence ought to define an educational institution,” Royce told his audience packing the church sanctuary on January 23.

From stewardship to knowledge, from service to integrity, MC’s seven core values reflect what the Baptist-affiliated university is all about, students say. Integrity, fidelity, inquiry & knowledge made the Mississippi College list, too.

“My favorite one is excellence,” says MC student Molley Hastings, 20, of Caledonia. “That’s what the school really strives for.”

The values that President Royce highlighted are a good fit for the university, she said. It’s evident to students on the Clinton campus as they observe their professors teaching classes, adds the biology/pre-med major.

A political science major from Gulfport, T.J. Williams believes the MC core values check off all the right boxes. “I see respect and excellence here. People are operating with integrity.”

It will be the final Mississippi College Founder’s Day that President Royce will lead. He’s retiring this spring after providing extraordinary leadership to the Christian university the past 16 years.

Students say they are sad to see Dr. Royce step down in a few months.

“He knows every student personally,” Hastings said. “It will be hard to fill his shoes. He’s done a lot for the school to make it feel like a community.”

President Royce should be saluted for showcasing the university’s core values at Founder’s Day and for spreading the message on the school’s website, students say.

“These are core values that are reflected at Mississippi College from all of the faculty, staff and students who attend here,” said sophomore Molly Sorto, 20, of Pontotoc. The music education major says the value of respect is witnessed daily at America’s second oldest Baptist college. “Respect is something that everyone shows.”

Following President Royce’s address, students, faculty and staff continued to celebrate the anniversary of Mississippi College. First known as Hampstead Academy with a handful of students, MC began in 1826 amid humble beginnings in rural Central Mississippi.

Members of the MC family enjoyed coffee and Blue & Gold cake under a large tent outside Nelson Hall. MC Choctaws sports personality Tom A. Hawk posed for a blitz of photos with students. Activities spilled over into Wednesday with officials to start to distribute 192 Founder’s Day T-shirts to students.