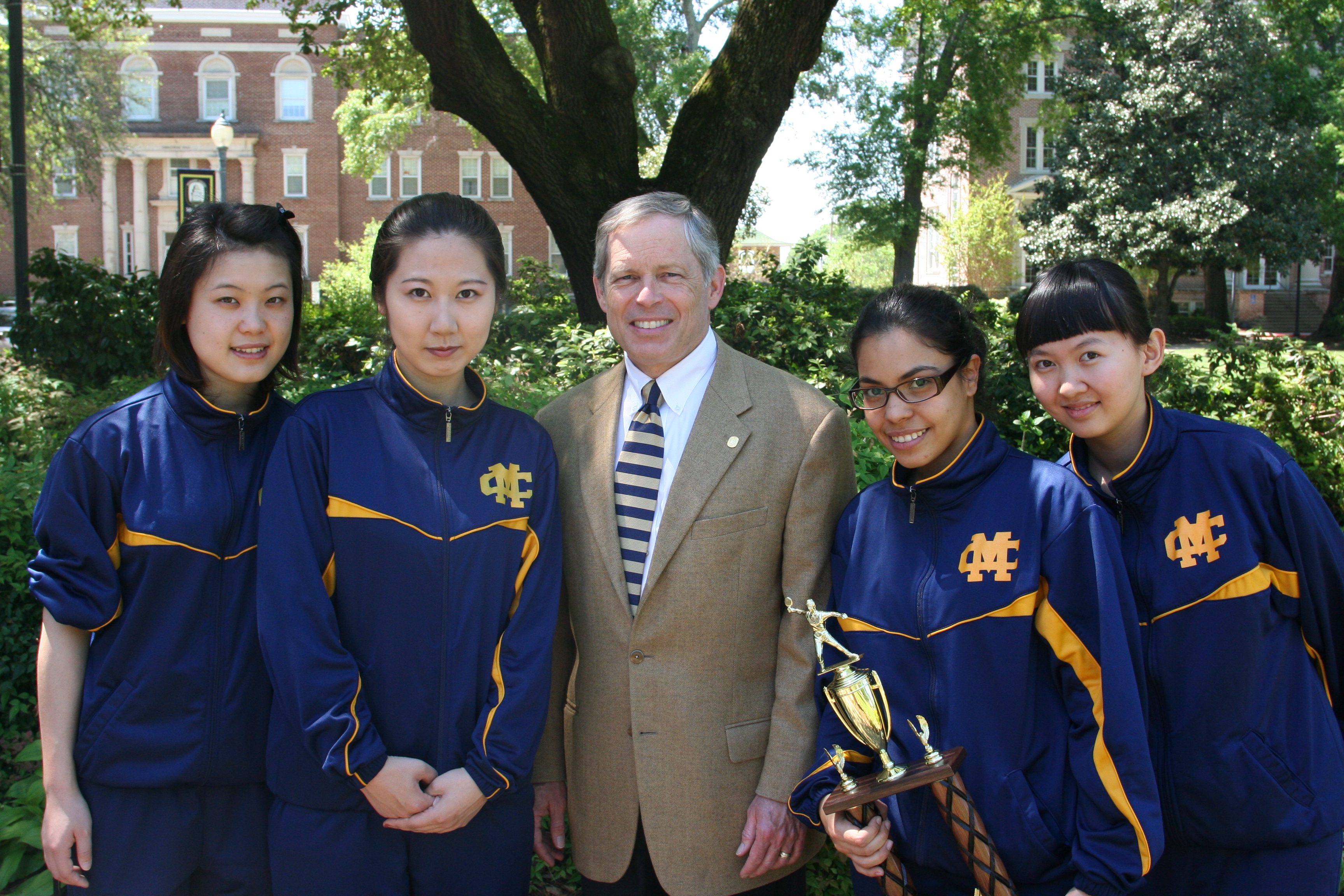 MC President Lee Royce joins members of the women's table tennis team ranked 4th in the USA and Canada in 2009.

Coaching kids during visits to 20 Preschool of America facilities in Manhattan, Queens and Brooklyn is a labor of love for the native of China.

Table tennis remains king in China. But the lively sport cannot match America’s fan base for the NFL, NBA, and MLB, among others.

Teaching table tennis fundamentals to boys and girls, ages two to six, Jenny seeks to change that trend. It’s a slow process. But table tennis is growing in popularity with over 150 college teams playing in National Collegiate Table Tennis Association tournaments across the USA and Canada. More high schools in states like Minnesota and New York are fielding teams, too.

As a table tennis standout during MC’s first two seasons, Jenny did her part to elevate the sport on the Clinton campus to national prominence. She was part of a strong MC finish at the 2009 national championships in Rochester, Minnesota. Jenny and three Lady Choctaws teammates paddled their way to become the 4th best women’s collegiate team in North America.

She uses her English and Chinese speaking skills, and table tennis experience to teach preschoolers not far from Broadway’s bright lights.

Her performance the past two years is getting rave reviews. “Her experience and patience allows her to manage 15 to 20 students at the same time,” says Ziming Shen, principal and CEO of the Preschool of America. “She exceeds expectations of both children and parents. Her positive approach leaves no one indifferent.”

A certified table tennis coach, Jenny polishes her game during evenings at clubs in the New York City area. She’s among the five best players at the New Jersey Table Tennis Club in Westfield.

Her coaching techniques make her a hit with children. Using a table tennis machine to propel balls at various speeds or stressing words of encouragement, Jenny never quits teaching.

Wu is the only table tennis instructor at Preschool of America.  Her tenacity on the job will pay off for future generations.

“Watching Haijing working with children is a pleasure,” Shen says. “She loves children and this is most important for us.”

At pre-schools, physical activities for the children are valued along with their academic success and attention to their health and overall development.

It wasn’t too long ago that Haijing received her first taste of life in the USA. A native of the city of Hefei in the Anhui Province in China, Jenny came South and enrolled at MC for the first time in 2008. She learned to speak English and received “A” grades. In 2012, she earned her master’s in accounting at Mississippi College.

Living in residence halls on the Clinton campus, friends welcomed the newcomer from China. She became a solid student. “With their help, I did not feel it was too hard to study.”

It wasn’t all table tennis practices and books. Jenny attended MC’s International Festivals and took trips to New Orleans to feast on crawfish and enjoy the French Quarter. Jenny worked at the university’s computer lab to help other students.

In its 10th season, the MC team ranks No. 1 in the South with its players preparing for the national championships in Eau Claire, Wisconsin April 7-9. Coach Cheng Li is stepping up Alumni Gym practices. As coach and captain, the native of China led the team to its first national title in 2015.

Jenny is rooting for her alma mater 1,000 miles away. She wants MC to capture its second national table tennis championship.