MC Alert: MC operations on the Clinton campus and at MC Law in Jackson will close at 3:30 p.m. on Tuesday, Nov. 29, in anticipation of severe weather. All classes at both the main campus and the law school beginning after 3:30 p.m. are canceled. Please monitor local conditions and stay weather aware.
Posted Thursday, November 1, 2018 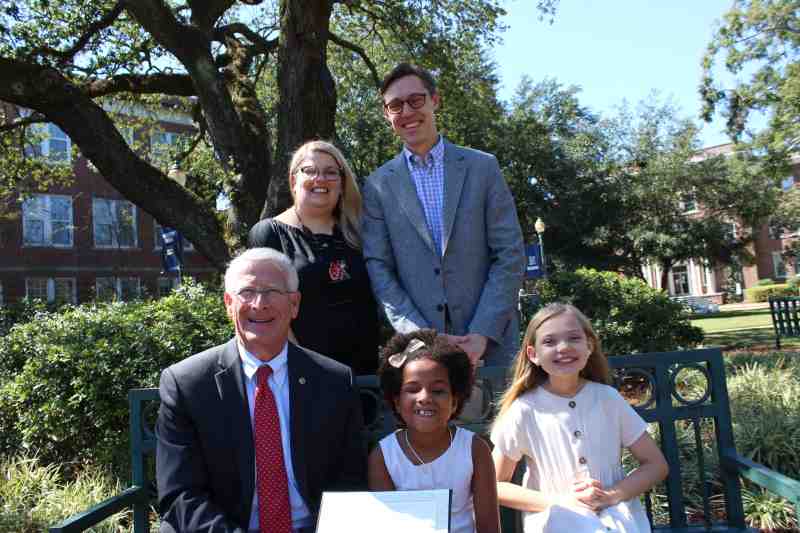 U.S. Sen. Roger Wicker of Mississippi presents the Angels in Adoption award to the Wallace family. Standing in the back row: Hannah Wallace and her husband John. Sen. Wicker sits by ZZ Wallace and her sister, Ivy Wallace on the Mississippi College campus. photo by Andy Kanengiser MC University News Coordinator

Hannah and John Wallace waited three years before learning in 2014 they were able to adopt a little girl. In March 2015 the Wallaces traveled to Ethiopia to meet their new daughter, ZZ, who is permanently blind, and bring her home to Clinton.

The anxious years of waiting along with challenges facing the Wallaces amid changes in the complex Ethiopian adoption process finally ended. As a result of their tenacity, and strong Christian faith along the way, the Clinton, Mississippi couple received a national award.

The Wallaces were presented with the Angels in Adoption Program award for the state of Mississippi. More than 2,500 Angels across the USA have been given this honor since 1999. The prestigious award celebrates individuals who become tireless advocates for children in need of a family.

The annual awards program has the support of the Congressional Coalition on Adoption Institute. The non-profit is dedicated to raising awareness about millions of children worldwide in need of permanent, safe and loving homes. The Washington-based non-partisan group seeks to eliminate obstacles that hinder children from realizing their basic rights to a family.

The organization’s programs equip Congress and policymakers with the knowledge to make informed decisions to benefit children needing a loving family.

U.S. Sen. Roger Wicker of Mississippi presented the Wallaces with the award during an October visit to Mississippi College’s Clinton campus.

A 2006 MC graduate, Hannah Shanks Wallace serves as a staff member in the Office of Public Relations at the Baptist-affiliated university. John Wallace, who earned two MC degrees, is the principal at Clinton Junior High.

“We are honored to be Mississippi’s Angels in Adoption recipient,” Hannah Wallace said. “Adoption is hard but so important and necessary. We will always advocate for adoption, children and families. We believe that all children deserve families.”

The lengthy process for both Mississippi College graduates to adopt ZZ was featured in the university’s “Beacon” alumni magazine in the Summer of 2015.

The Wallaces’ daughter, Zeritu Magnolia Wallace, (nicknamed ZZ), has been home for three years in Mississippi.

Receiving an award and gaining recognition following their adoption process is thrilling, Hannah says. “It feels so great that someone has been touched by our story.”

But it doesn’t make the Mississippi family special, Hannah Wallace added. “We did something that God called us to do. It was about obedience for us.”

God, she said, “made a way for this adoption to take place and that’s why we have our wonderful daughter.”

At the time, ZZ was a three-year-old girl living in Africa when the Wallaces got the call with good news from adoption agency officials in April 2014. At the time, there were an estimated seven million orphaned children in Ethiopia.