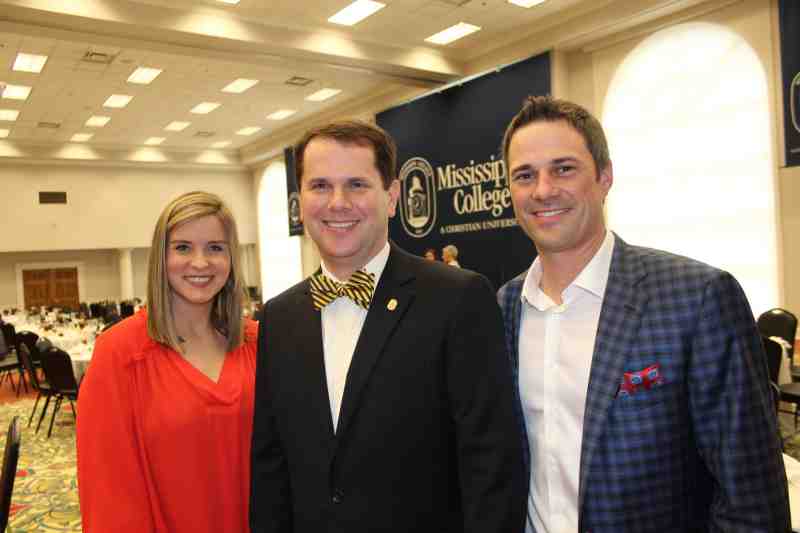 Mississippi College graduate and business leader Scotty Elliott served as the guest speaker at the "Who's Who at Mississippi College'' luncheon. President Blake Thompson is flanked by Elliot's wife, the former Alana Leigh Boles of Meridian, and the guest speaker at the Anderson Hall event. Scotty is entering his 9th year as President/CEO of One Life America, an insurance & financial services firm. There were 79 outstanding MC students honored at the Feb. 15 program on the Clinton campus.

“MC has a fantastic program,” Klopman said. From the gross anatomy lab at the Lee Royce Medical Science Building to classes taught by stellar professors, the Baptist-affiliated university proved to be a great fit, he says.

For his hard work as a biology/medical sciences major, the 22-year-old Clinton resident was among 79 students inducted on February 15 into “Who’s Who at Mississippi College.”

President Blake Thompson handed certificates to each outstanding student honored at an Anderson Hall luncheon. A senior, Klopman will continue his studies at the University of Mississippi Medical School in Jackson after getting his MC diploma.

So many of the students recognized Friday bring excellent credentials to the table.

On track to graduate in May, Kelsey Gammill, 22, of Monroe, Louisiana says the MC School of Nursing equipped her with the skills to become a caring medical professional. Why nursing? “I have a heart for service, for helping people” for decades to come, she said.

The same heart to serve is part of the DNA for Ryan Warnick, 20, of Tupelo. The interpersonal communication major seeks to become a pastor.

The Tupelo Christian Prep grad serves as a worship intern at Grace City Church in Jackson. He’s involved on the Clinton campus as a student orientation director and Civitan Club member.

Seeing dozens of classmates honored at the “Who’s Who” program, Ryan said, is a rewarding experience. “It was cool to see a lot of friends from the school community and church.”

For scores of parents, professors and staff in attendance, the “Who’s Who at Mississippi College” program was a wonderful experience, too.

The event’s guest speaker, Mississippi College graduate Scotty Elliott, is a familiar face to many at the nation’s second oldest Baptist college. He worked on the Christian university’s admissions staff until venturing out to other opportunities in 2008.

A Meridian native, Elliott is serving his 9th year as the president/CEO of One Life America. It is an insurance and financial services firm based in Meridian. Expanding to 40 states, the company specializes in delivering competitive products to the senior marketplace.

A former MC Choctaws football player, Elliott spoke of four key steps to become successful. The first step is to “make up your mind to be successful.” Step two, he said, is “you’ve got to be a person of action.”

At 193-year-old Mississippi College, many students blossom as success stories in their professions. MC students are never quitters, he said. Each day, they “get up and move” and “set sail for a sea of success.”

Tying his message to the Bible’s teachings, Elliott also encouraged the students to stay persistent no matter what comes their way. “Your life will be loaded with challenges.”

Scotty Elliott graduated with honors from Mississippi College with a bachelor’s degree in accounting in 2004. He received his MC master’s in business education with honors. Business remains just one priority for the Mississippian. Family always ranks high on his priority list. Scotty and his wife, the former Alana Leigh Boles of Meridian, are the parents of two children.

The former East Mississippi Community College student-athlete will always cherish his days at MC. Football was the vehicle bringing him to Mississippi College. But Scotty ended up learning a great deal from excellent professors, coaches, staff and his fellow students. “It was at MC that my faith was strengthened.”