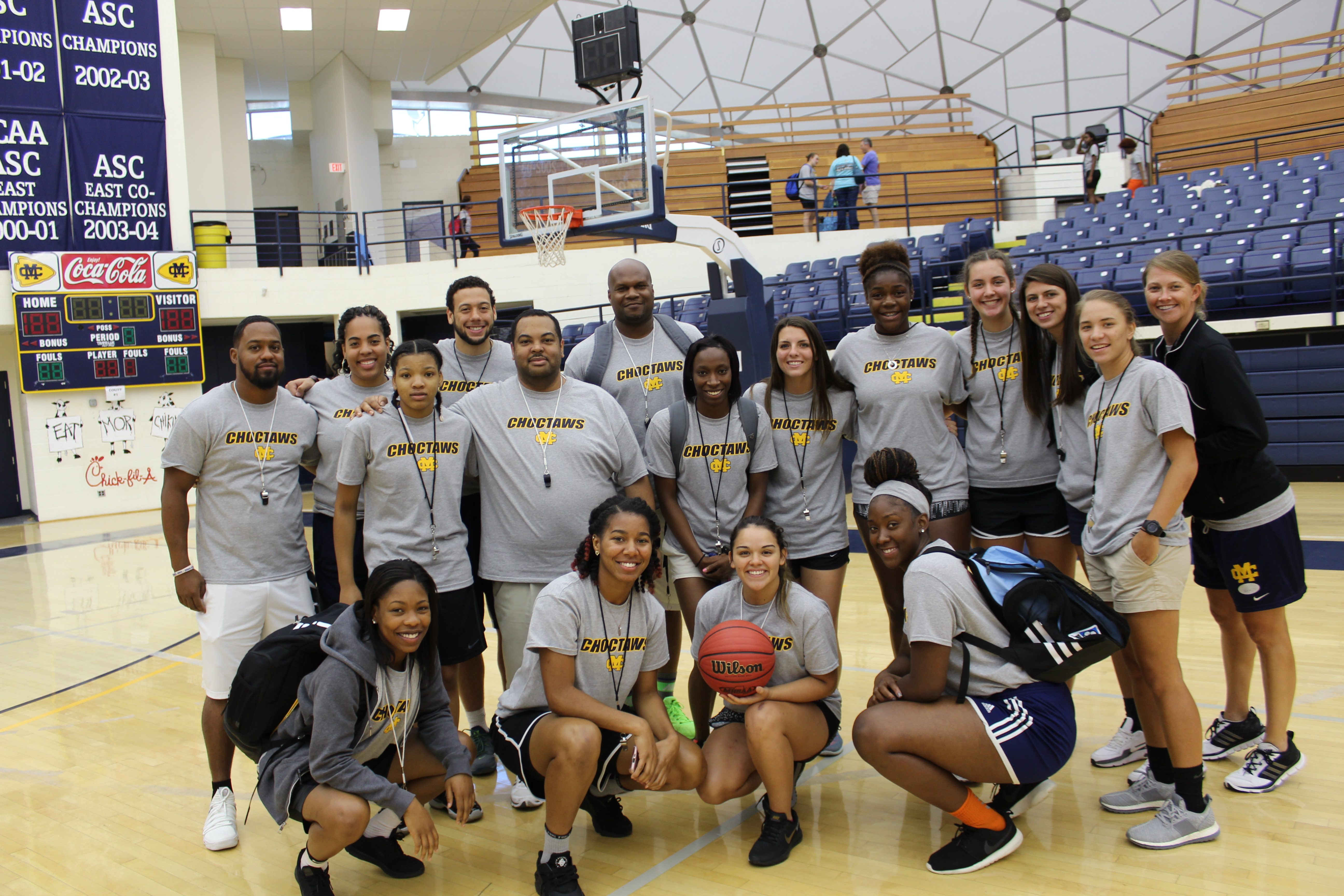 Players on girls basketball teams in the Pine Belt, the Delta, metro Jackson and cities in Louisiana learned valuable lessons at Mississippi College.

Dribbling, shooting, defense, exercise drills, and lots of games were packed into a few days on the Clinton campus.

It all starts with the leadership of MC Lady Choctaws head basketball coach Paul Duke, and a hard-working staff logging long hours.

Duke hands the credit to his talented staff that includes Lady Choctaws assistant coach Jalessa Taylor and some of his MC players. “We have a great staff – they are unbelievable.”

Prices are affordable and fundamentals practiced on the court show results over the regular basketball season. The location in Clinton and nice athletic facilities for campers are another selling point.

Basketball players coming to Mississippi College over the summer always work up a sweat. They hone their hoops skills “from early in the morning until late at night,” says Ken Gilliam, the MC continuing education director. He oversees sports, music and church camps attracting 6,000 young people in June and July.

This week’s latest crop of 81 basketball campers on the Clinton campus traveled from schools stretching from John F. Kennedy High School in Mound Bayou to Laurel Christian School in Jones County. They came from Baton Rouge Episcopal High and Madison Central High, among others.

MC Lady Choctaws graduate assistant Isaiah Butler got as much out of the camp as the players. “I loved working with the girls, teaching and watching them learn.”

A former Brandon High hoops standout and ex-Mississippi State player, Butler’s got big plans ahead on the hardwood. He will spend time working out and shooting baskets to prepare for a 12-day pro basketball tour in Germany in late August.

Some of the “graduates” of MC Lady Choctaws hoops camp end up as players on Duke’s teams. Other campers are impressed with the Clinton campus and become Mississippi College students primarily for its strong academic programs.

Serving as the head coach for the Lady Choctaws team for more than two decades, Duke always gets a kick out of summer camp season. “We’ve got great camps,” the coach says. “They are a lot of fun.”

In the months ahead, the Mississippi State and MC graduate will tweak the Lady Choctaws hoops camp to improve the product in June 2018. “Camps are like recruiting – you’ve got to work on them year-round.”

Before long, MC will host its 2nd summer football camp on July 11. MC head football coach John Bland and his staff will team with counterparts from the University of Central Arkansas to stress gridiron skills to visiting high school players.