MC Alert: MC operations on the Clinton campus and at MC Law in Jackson will close at 3:30 p.m. on Tuesday, Nov. 29, in anticipation of severe weather. All classes at both the main campus and the law school beginning after 3:30 p.m. are canceled. Please monitor local conditions and stay weather aware.
Posted Wednesday, May 15, 2019 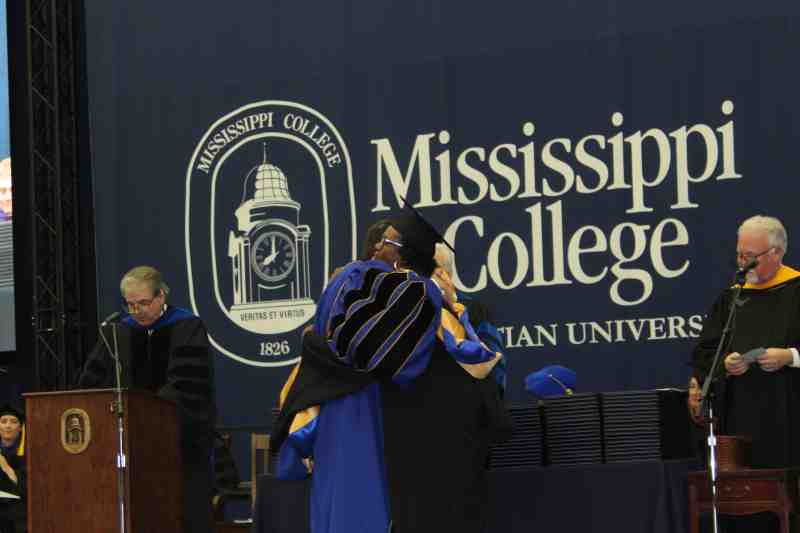 President Blake Thompson hugs Teri Wright, who received the Mississippi College diploma of her late son, Dante Tyrrell Wright at the university's commencement May 11. The MC graduate student from Tupelo was 25 years-old when he died April 2 at a Jackson hospital.

At Spring commencement, Mississippi College leaders recognized the academic achievements and joyful attitude of an impressive young graduate student who recently passed away.

In an emotional moment Saturday, President Blake Thompson hugged the mother of the late Dante Tyrrell Wright. His mother, Teri Wright, was welcomed on stage to receive his master’s diploma on May 11.

Dante Wright died on April 2 at age 25, just six days shy of his 26th birthday. Making plans to become a physician, the Tupelo resident was pursuing a master’s degree in biology/medical sciences on the Clinton campus.

“His recent death deeply saddened all of us at Mississippi College,” said School of Science and Mathematics Dean Stan Baldwin. He saluted Dante’s persistence in challenging courses such as Human Gross Anatomy. His cheerful approach to life encouraged his lab partners and his entire class, he said.

At Saturday afternoon’s commencement, hundreds of people stood for a moment of silence for Dante Wright. After receiving her son’s diploma posthumously from the School of Science & Mathematics, Teri Wright sat down to join other members of MC’s Class of 2019 as ceremonies continued at the A.E. Wood Coliseum.

Audiences applauded the five-minute video showcasing the thought-provoking works of the Christian artist and Founding Father of the MC Art Department in the 1950s.

Featuring the sage words of the internationally celebrated artist, the video captured his many contributions, showcasing beautiful sculptures adorning his alma mater.

The video was produced by MC graduates Anthony Thaxton (Class of 1994) and his wife, Amy Thaxton (Class of 1997). From “The Servant Savior” near Provine Chapel on the Clinton campus to “Moses, Deliverer of the Law” on display at the MC Law School in Jackson, his sculptures leave an immense legacy.

The video also featured Sam Gore’s musical talents with his harmonica, and plenty of family scenes.

It’s difficult to sum up his extraordinary life in a few minutes, but President Blake Thompson believes the video captured the essence of his illustrious career. It spans more than six decades.

Art instructor D.P. Smith followed the video tribute to Dr. Gore with a prayer of remembrance. Sam Gore passed away last month at a Jackson hospital at age 91. The 1952 MC graduate recently finished two disciples, and was half-way done with a third disciple to go with his new “Christ in Gethsemane” sculpture. His final work of art was dedicated in late March in the Rhoda Royce Prayer Garden.

Other memorable moments at graduations occurred when Anthony Jackson spoke of his four years at MC – from Choctaws football player to student leader. Last year, the Mound Bayou resident made school history as the first African American to serve as Student Government Association president on the Clinton campus. He spoke of the MC friends and university leaders, including President Thompson, who helped him on his journey. The 22-year-old political science graduate from the Delta is running for a seat in the Mississippi House with Democratic primaries set for August 6.

Other new graduates like Lane Wilson of Clinton and Kyle Alford of Tupelo will continue their studies in healthcare fields. Lane will enroll at the University of Mississippi Medical School in Jackson. Kyle is bound for UMMC’s School of Dentistry.

Some, like the new grads at the MC School of Law in Jackson will soon prepare to pass state Bar Exams before joining the profession.

In his keynote address, U.S. District Judge Carlton Reeves of Jackson noted the hard work of lawyers to help African Americans in Mississippi achieve major gains during the Civil Rights Era. But the job of these newcomers in the legal community is really just beginning. The federal judge congratulated the new MC Law graduates and urged them to promote the cause of justice nationwide.