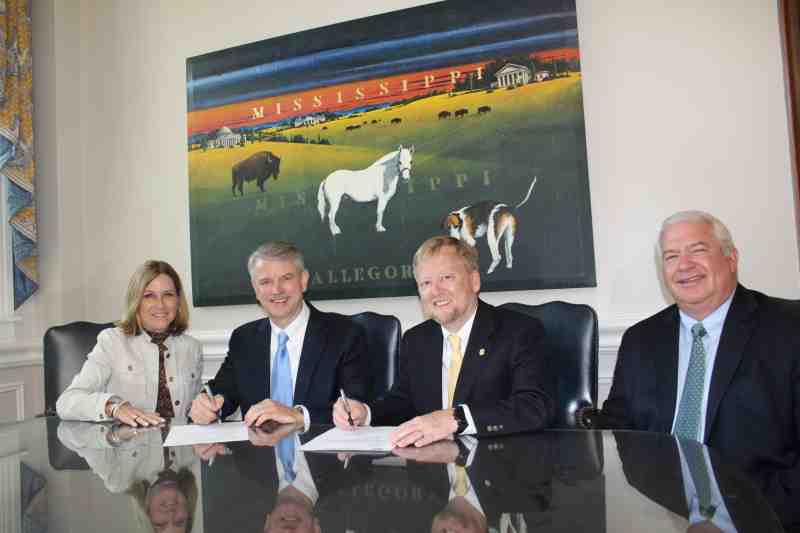 One of the world’s leading engineering and scientific research organizations is based in Vicksburg.

Part of the U.S. Army Corps of Engineers, the Engineer Research and Development Center is located less than 35 miles from the Mississippi College campus.

That distance just got shorter. A new agreement establishes partnerships between leaders at MC and officials with the high-tech laboratory featuring the world’s fastest supercomputers.

Key components of the agreement will encourage employees at the center to earn graduate degrees in mathematics at MC. Faculty and students would be involved in defense lab projects. Student employment opportunities would be boosted at the federal facility in Warren County.

Pittman leads the premier team of engineers, scientists, physicists, mathematicians, technicians and support personnel. They are tasked, he said, with “solving the toughest challenges faced by our nation and military today.” Their complex work to assist USA soldiers ranges from military to humanitarian missions.

Travis is elated to see the partnership between the two nearby institutions. He believes the sky’s the limit for more cooperative ventures in future years.

It’s a case, Travis said, of an outstanding research facility in Vicksburg teaming with a stellar university equipped with a “quality teaching and learning environment.”

Mississippi College officials will initially promote its mathematics programs as a solid fit for center employees. But the university will expand its advertising in ERDC publications to include all academic programs in STEM (Science, Technology, Engineering and Mathematics) as well as the MBA.

The Army Corps of Engineers will pay all costs of their employees to take Mississippi College classes.

ERDC’s seven labs nationwide operate with 2,100 federal employees and contractors with an annual research budget exceeding $1 billion. Outside Mississippi, the agency’s labs are situated in Virginia, Illinois and New Hampshire.

The initial term of the center’s new partnership with Mississippi College is for five years.

The Engineer Research and Development Center was founded in October 1998. It is a growing facility staffed with professionals, Pittman said, seeking to “make the world a safer and better place.”