MC Alert: MC operations on the Clinton campus and at MC Law in Jackson will close at 3:30 p.m. on Tuesday, Nov. 29, in anticipation of severe weather. All classes at both the main campus and the law school beginning after 3:30 p.m. are canceled. Please monitor local conditions and stay weather aware.
Posted Wednesday, October 26, 2022 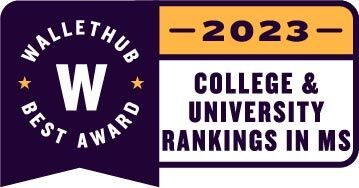 Foir the second consecutive year, WalletHub has placed MC at the top of its Best College and University in Mississippi ranking.

For the second year in a row, WalletHub, a Washington, D.C.-based credit-reporting and reviewing website, has ranked Mississippi College as the state’s best college and university, public or private, at the most reasonable cost to graduates.

The site ranks MC 31st out of 301 colleges and universities in the South Region and 141st out of more than 900 higher-education institutions nationwide.

It’s the fourth time in three months that MC has been included in a list of top universities in the nation. In September, U.S. News and World Report ranked MC among the Best National Universities for 2022-23. Niche, a data and review company, listed MC as No. 10 on its “Best Christian Colleges in America” list for 2023. And in August, the Princeton Review named MC among its “Best Southeastern Colleges.”

Dr. Debbie Norris, associate provost and dean of the graduate school at MC, said the recognition MC has garnered from independent organizations like WalletHub can be attributed to many factors.

“When I look at the universities on this list in the Southern Region of the U.S., I am so pleased that MC is No. 31, following Texas A&M at No. 30,” Norris said. “This ranking provides affirmation of MC’s dedication throughout its history to quality academic programs, excellent faculty, low student-to-faculty ratios, and accomplished alumni.”

To illustrate the quality of MC’s academic programs, Norris said, “One of Mississippi College’s strengths is its reputation for pre-medical majors. MC is the only undergraduate institution in the country that offers the NBME Medical School Board Exams (Shelf exams). Students can take the exam once they have finished a medical school-level course, which includes gross anatomy, physiology, histology, neuroanatomy, and pharmacology.”

She said that although MC is primarily a teaching institution, its outstanding faculty perform scholarly work that embellishes their efforts in the classroom.

“One example is the School of Business faculty: last year, 100 percent of its full-time faculty members met their expected research output of one peer-reviewed journal article published and one other intellectual contribution over their individual two-year cycle,” she said. “This guaranteed that the faculty would maintain its qualifications under the AACSB’s accreditation standards.”

Regarding MC’s accomplished alumni, Norris said, “MC treasured hundreds of thousands of its alumni who come from a variety of academic areas. One example is the father-son Thaxton duo of Anthony and his son, Bryant, who recently received Southeast Emmy Awards from the National Academy of Television Arts this past summer. These men studied art education and music at MC.”

Each measure was graded on a 100-point scale, with a score of 100 representing the best school performance and most favorable conditions for undergraduate students during and after attendance. To calculate an overall score, WalletHub determined each school’s weighted average across all metrics and used the resulting sum to rank the institutions.

MC received a total score of 61.35 nationally, which fell within the 85th percentile of the rankings and outpaced all other institutions in Mississippi.

Recognizing the challenge of predicting future outcomes, WalletHub’s Best Colleges ranking also analyzed post-attendance metrics, such as the student loan-default rate and the share of former students who out-earn high school graduates, to show the value of the education students can expect to receive beyond their undergraduate studies.

According to WalletHub, the rankings were created to help prospective college students gain the most value from their higher-education choices.

“In a fierce global economy, a college degree can help secure employment and keep you ahead of the competition,” reads the site. “And though success ultimately rests on students’ own determination and performance, the quality of the schools they choose can certainly have an impact.

“As students consider their college options, they must consider both school quality and cost. And with tuition rates rising every year, many students are likely to be more selective with their options.”

The data used to create the ranking were collected from the National Center for Education Statistics, the Council for Community and Economic Research, the U.S. Department of Education, COLLEGEdata, and PayScale. Some institutions were excluded from the rankings because of data limitations.