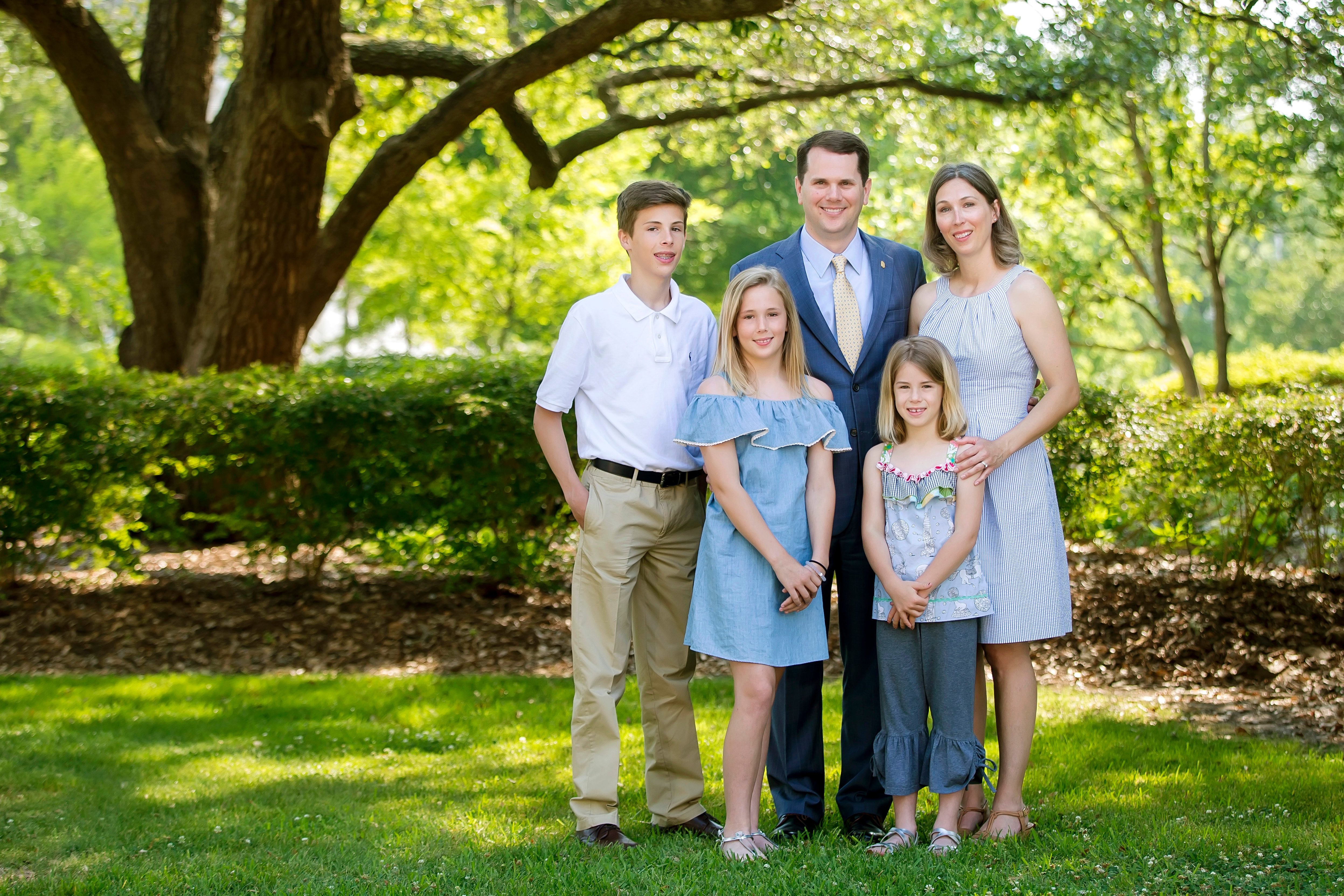 MC supporters delivered a hearty round of applause soon after his initial speech Monday afternoon on the Clinton campus as the Christian institution’s 20th president.

Hundreds of MC faithful crowded Swor Auditorium to get their first glimpse of Dr. Thompson, his wife, Jana, and their three children. Dr. Thompson’s youthful energy and passion to bring Mississippi College to even loftier heights in the higher education arena impressed the audience.

The MC Board of Trustees approved the appointment of The Ohio State University vice president by a unanimous vote on May 14. Among dozens of qualified candidates, the name of the Rienzi, Mississippi native and University of Mississippi Pharmacy School graduate kept rising to the top.

“I could not imagine a better leader in the country than Dr. Blake Thompson to step in as our new president at Mississippi College,” said trustee Andy Taggart, a Ridgeland attorney.

Taggart, the author of books on Mississippi politics, has known Thompson since the incoming Mississippi College leader served on U.S. Sen. Thad Cochran’s staff more than a decade ago. He later followed his career when he moved to the Oak Ridge National Laboratory and inherited challenging assignments at Ohio State the past nine years.

“I’ve been telling people for years that we need to figure out how to steal him back to Mississippi,” Taggart said. “But I had no idea that would mean that he would be leading our school as we approach our 200th year serving the cause of Christ as an institution of higher learning.”

Taggart was the trustee making the motion to select Dr. Thompson as the successor to retiring President Lee Royce. He goes to work July 1 to take the reins of the 5,200 university, America’s second oldest Baptist college.

In his remarks, Thompson expressed words of thanks to Dr. Royce and his wife, Rhoda, for 16 years of faithful service to make Mississippi College a much better university.

“God’s been faithful to us,” Thompson said as he and Jana and their family makes the journey back to their roots in Mississippi.

At a news conference, Thompson told reporters his immediate plans are to get his family settled at their new residence on the Clinton campus. In early July, he starts working with some wonderful MC people. “I look forward to making MC a strong and vibrant place.” That includes strengthening the faith of students.

Blake Thompson will soon walk the Brick Streets of Olde Towne and enhance university partnerships in Clinton and metro Jackson. Clinton Mayor Phil Fisher was among the officials embracing the new chief executive.

“Dr. Thompson will continue to take the school in the right direction,” says MC junior Kyle Alford, a biomedical sciences major from Tupelo. The 43-year-old Mississippi native is a perfect fit to follow the brilliant work that Dr. Royce did since 2002, he added.

Dr. Thompson has close friends in higher education circles. One of them is Corinth native Mark Keenum, president of Mississippi State University. Dr. Keenum is a former chief of staff to recently retired Sen. Cochran in Washington. Keenum served as Thompson’s boss around the time Cochran chaired the influential Senate Appropriations and Agriculture committees.

“Dr. Blake Thompson is an outstanding university administrator and a wonderful person,” Keenum said. Noting their work together as U.S. Senate staff members, “I can attest to Blake’s tremendous people skills and his ability to work effectively with any number of constituencies to get things done,” said Keenum, a former MSU professor.

Mark Keenum and his wife, Rhonda, visited the Thompsons on the Ohio State campus in March. The Mississippi friends gathered for the MSU Lady Bulldogs basketball team’s Final 4 appearance in the NCTTA tournament. “I was impressed with the work he was doing at OSU,” the MSU president said. “I know that Dr. Thompson will be a real asset to Mississippi College in the future, and I look forward to working with him in that new role.”

There are already MC-MSU connections. Mississippi College began its electrical engineering program three years ago. MC modeled the courses after classes taught on the Starkville campus.

Taggart sees only positives for MC Choctaws supporters as he sizes up Thompson’s professional portfolio. The secretary to the Ohio State University Board of Trustees should advance Mississippi College for years to come, he believes.

“It’s going to be an amazing ride,” Taggart said. “We move forward in the certain knowledge that the Lord has shown His favor upon us by calling this man to lead Mississippi College.”