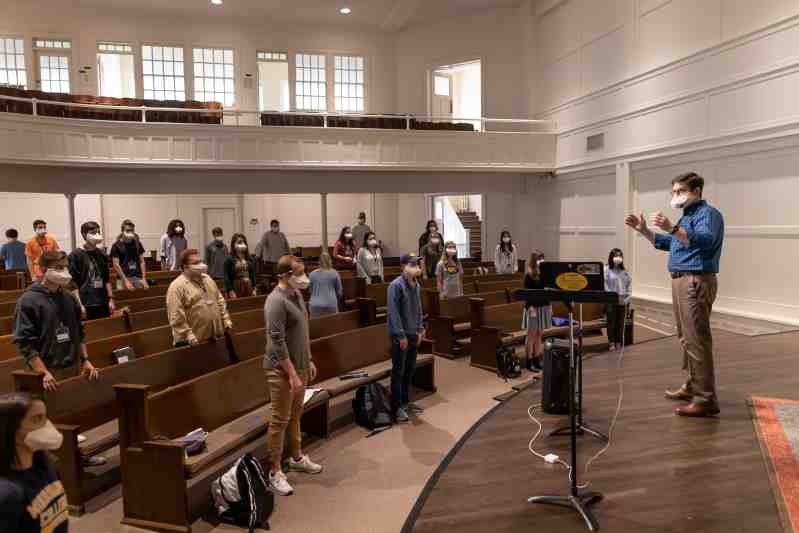 One of Mississippi College’s signature events each December, Festival of Lights concerts pack Provine Chapel to celebrate Christmas with songs and readings of the scriptures.

Due to the COVID-19 pandemic, the MC Singers will perform in a special November 15 concert titled Festival of Lights: Thanksgiving Edition. The program begins at 3 p.m. in the Jennings Courtyard, site of the first festival 35 years ago.

The Department of Music production will be videotaped, and the concert can be viewed on YouTube at a later date. The live audience seeing the MC Singers performance will be limited to members of the Blue & Gold family on campus. The concert is free.

Each year, the Festival of Lights tells the story of the birth of Jesus and spreads Christ’s message to audiences, while ushering in the Christmas season. In recent years, the concert at Provine Chapel was taped and broadcast on Mississippi Public Broadcasting television stations statewide.

The Festival of Lights began on the Clinton campus in 1986 under the direction of Richard Joiner. Today, the award-winning MC Singers are conducted by Mark Nabholz. The MC music professor serves as the Christian university’s director of choral activities.

The theme of the November 15 concert is “Thankful,” and includes music by Randall Thompson, Gerlad Finzi, Alice Parker, Ola Gjeilo and Edward Elgar, among others, Nabholz says. He will conduct the MC Singers with music professor Tyler Kemp serving as the pianist that Sunday afternoon.

In September, the MC Singers were busy rehearsing at First Baptist Church Clinton, while practicing social distancing and wearing masks.

Since March 2020, the worldwide health emergency has required people to make major adjustments to mitigate the spread of the coronavirus. That includes an extensive list of health protocols at Mississippi College from required mask wearing to social distancing and plenty of hand sanitizer stations all over campus.

“There will be 40 students singing, so the size of the MC Singers has not changed,” Nabholz said. “I’m just so thankful that the choirs are being allowed to meet and rehearse under the circumstances.”

As one of MC’s health measures, university officials changed the academic calendar so the fall semester ends before the Thanksgiving holidays.

While practices continue at First Baptist Church Clinton, MC Singers including senior Natalie Fehrenbacher are thrilled to be part of this talented group.

“The beautiful thing about choral music is that no matter how gifted of a musician you are, you can’t make those sounds by yourself,” says Fehrenbacher, a piano performance major. “You need each of the people around you, and they need you. You learn to listen and depend on each other and become part of a whole that’s bigger than you.”

A Brandon resident, Fehrenbacher is on track to graduate in December. The MC Singers, the soprano said, “builds this sense of community that I think we all need, especially right now. I’m so thankful for the way MC Singers has given that to me, in rehearsal and out of it.”

The MC Singers roster includes several performers from metro Jackson. They include Gabi Jones of Clinton, Emilia Miceli of Brandon, Elizabeth Hammons of Pearl, Anna Marie Wood of Florence and Lindsey Harris of Raymond. Others are: Annie Hawks and Annale Quarles, both of Madison, Stephen Griffin of Jackson, Clayton Mathis of Richland, Jonathan Whittington of Florence and Callie Partridge of Ridgeland.