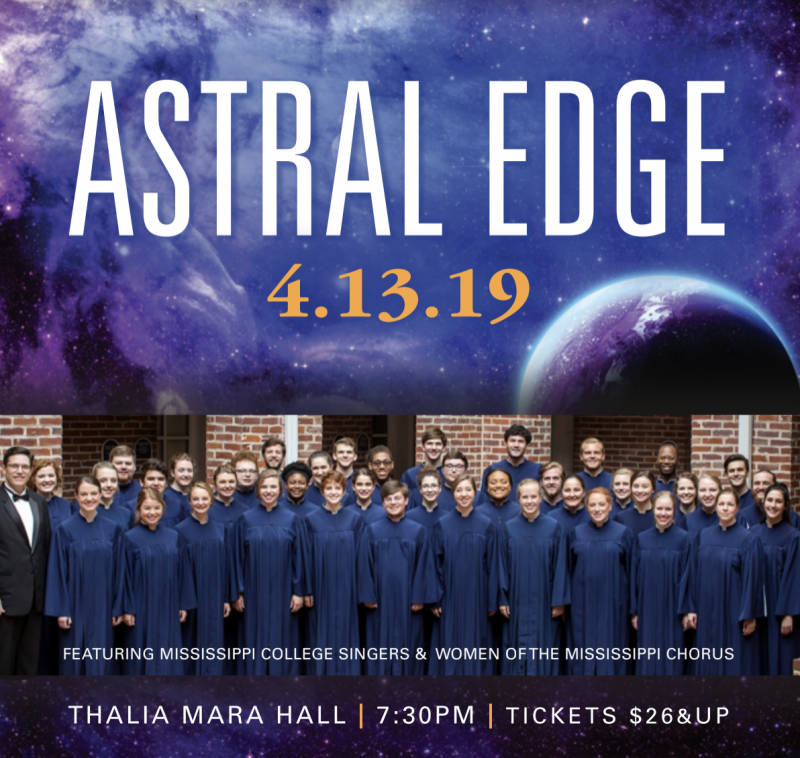 “Astral Edge” by the MC Singers will be held at Thalia Mara Hall beginning at 7:30 p.m. on Saturday.

Mississippi College Singers and the Mississippi Symphony Orchestra will combine their talents in an April 13 concert in downtown Jackson.

Titled the “Astral Edge,” the program is booked for Thalia Mara Hall beginning at 7:30 p.m. on Saturday.

MC Singers conductor Mark Nabholz sees an amazing learning experience ahead for the student choir on the Clinton campus as they partner with a leading professional orchestra.

“This opportunity is especially rare,” Nabholz said. He noted that two very famous and important musical pieces will be featured that Saturday evening in Mississippi’s capital city.

Born into a poor family in France in 1862, Debussy demonstrated amazing gifts with the piano early in his life. By age 11, young Claude was sent to the Paris Conservatory to study and advance his craft.

Considered the first Impressionist composer, Debussy penned the “Nocturnes” for orchestras in 1899. By the turn of the 20thCentury, he was considered the leading figure of French music. Debussy died in Paris in 1918.

The selection by British composer Gustav Holst titled “The Planets, Full Suite,” is a seven movement composition. Each movement of the suite is named after the planets of the Solar System. The piece was written between 1914 and 1916. An English composer, arranger and teacher, Holst died in 1934 in London.

The Spring concert promises to be a memorable evening for the MC Singers as well as Mississippi Symphony Orchestra musicians.

Mississippi Symphony Orchestra President/CEO Michael Beattie says talented musicians with his organization love working with the MC Singers. “They are always professional, prepared, delightful and bring a high level of artistry to our performances.”

In recent years, the MC Singers performed at Carnegie Hall in New York City and at a number of churches across the South. They’ve appeared in concerts in Europe and South Africa. In early April, the MC Singers went on tour in Baton Rouge and New Orleans.

Tickets for the Jackson concert cost $5 for children and students. Other ticket prices vary – from $26 to $69 and can be purchased online. Tickets may also be purchased at the Thalia Mara box office at 6:30 p.m. on the night of the concert.

One of the Mississippi Symphony Orchestra’s most popular events of the year is the Pepsi Pops concert at the Reservoir in May.

Next season is extra special for the Mississippi Symphony Orchestra. During the orchestra’s 75thanniversary, the 2019-20 season features an October 26 performance that salutes the late blues and rock legend Aretha Franklin.

For additional information on the April 13 concert, contact Rachael Roberts, director of marketing and box office with the Mississippi Symphony Orchestra. She can be reached at 601-960-1565.