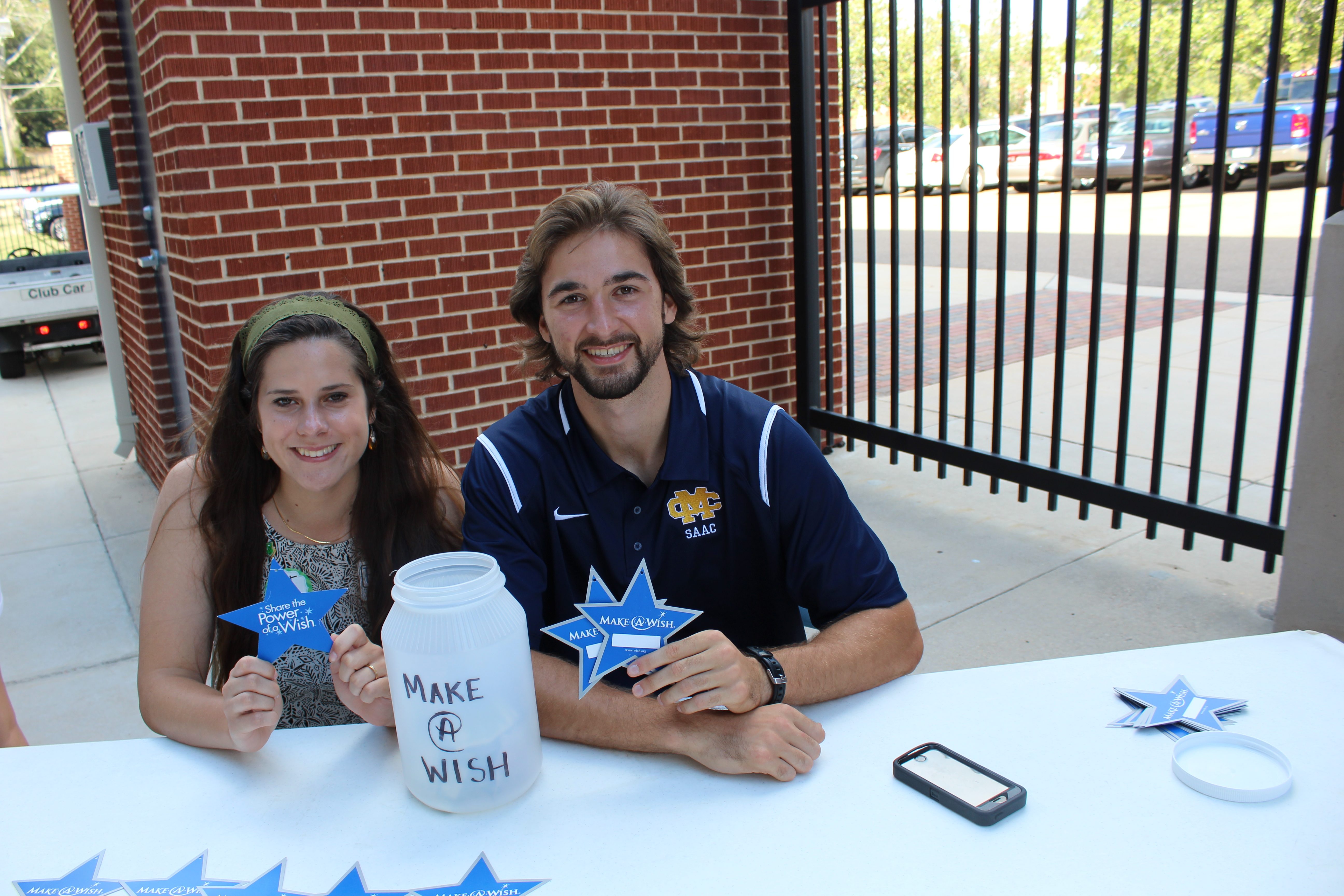 Mississippi College student-athletes collected funds for Make-A-Wish from one sports season to the next on the Clinton campus.

Mississippi College student-athletes stepped up their game to raise nearly $17,000 this year to benefit the Make-A-Wish Foundation.

Collecting funds at a marathon of sporting events on the Clinton campus, their efforts are amazing, leaders say. Donations to the foundation grant wishes for thousands of USA children battling life-threatening illnesses. Over 285,000 wishes were granted for boys and girls under age 18 dating back to 1980.

MC athletic leaders will celebrate the achievements of the university’s Student-Athlete Advisory Committee at the spring football scrimmage on April 7. Members of SAAC and Make-A-Wish will be recognized. Kickoff for the Friday evening game at Robinson-Hale Stadium is 6 p.m. Admission is free.

This year, Mississippi College ranks in the top five among NCAA Division II schools partnering with Make-A-Wish, organizers say. It’s been a solid partnership since 2003. D2 schools across the nation raised $605,000 for the foundation in 2014-15. The D2 campaign began with $49,000 generated the first year.

“It’s absolutely phenomenal how busy they are” with sports, classes, and so many other college activities, says Megan Ford, development coordinator with Make-A-Wish Mississippi. She will join Make-A-Wish Foundation board members at the wish “reveal” at the Blue & Gold football game.

Coach John Bland hopes to see a big crowd cheer the Choctaws as fans get a preview of the 2017 football season. But, more importantly, it’s an opportunity to see a wish of a lifetime granted for an ill Mississippi child. His wish will be revealed at the game.

Ford wants to thank the people investing their time in the school’s record-shattering campaign.

Players from the university’s 17 NCAA Division II sports volunteered to collect funds. It happened at football, basketball, baseball games and at track meets. There was money donated at the university’s parking garage during sports activities on the Clinton campus.

Moore, 21, a finance major from Huntsville, Alabama, says many MC Choctaws deserve to be saluted.

“The entire athletic department did a total group effort that went from administration to coaches to student-athletes,” says Moore, an MC junior.

Leaders from the MC Student Government Association pitched in, too.

Moore and other SAAC members including William “Sanders” Barrick, Katie Reid, Sydney Chandler, Sydney Oliver, David Fisher, Chris Manning and Darius Green did a fabulous job. Barrick is a member of the men’s tennis team, Reid is with the Lady Choctaws tennis team, while Chandler is a volleyball player. Oliver is a member of the Lady Choctaws soccer team, Manning plays on the Choctaws football team, and Green runs track.

The Make-A-Wish Foundation grants wishes to USA children facing major medical issues about every 35 minutes. Mississippi will reach 2,000 wishes going to ill children later this year. The tally in the Magnolia State began in 1985.

Across the nation, a recent wish granted to a 13-year-old involved shooting hoops with Portland Trail Blazers star Damian Lillard. For another USA teen, it was a family vacation to Hawaii.

Team efforts to assist Make-A-Wish, Andrew Moore said, are “a testament to how much the Jackson area matters to Mississippi College. Student-athletes want to reach out and help the community in any way possible.”

For more information about the Make-A-Wish Foundation, contact Megan Ford at mford@ms.wish.org or by calling 601-366-9474, extension 1302.