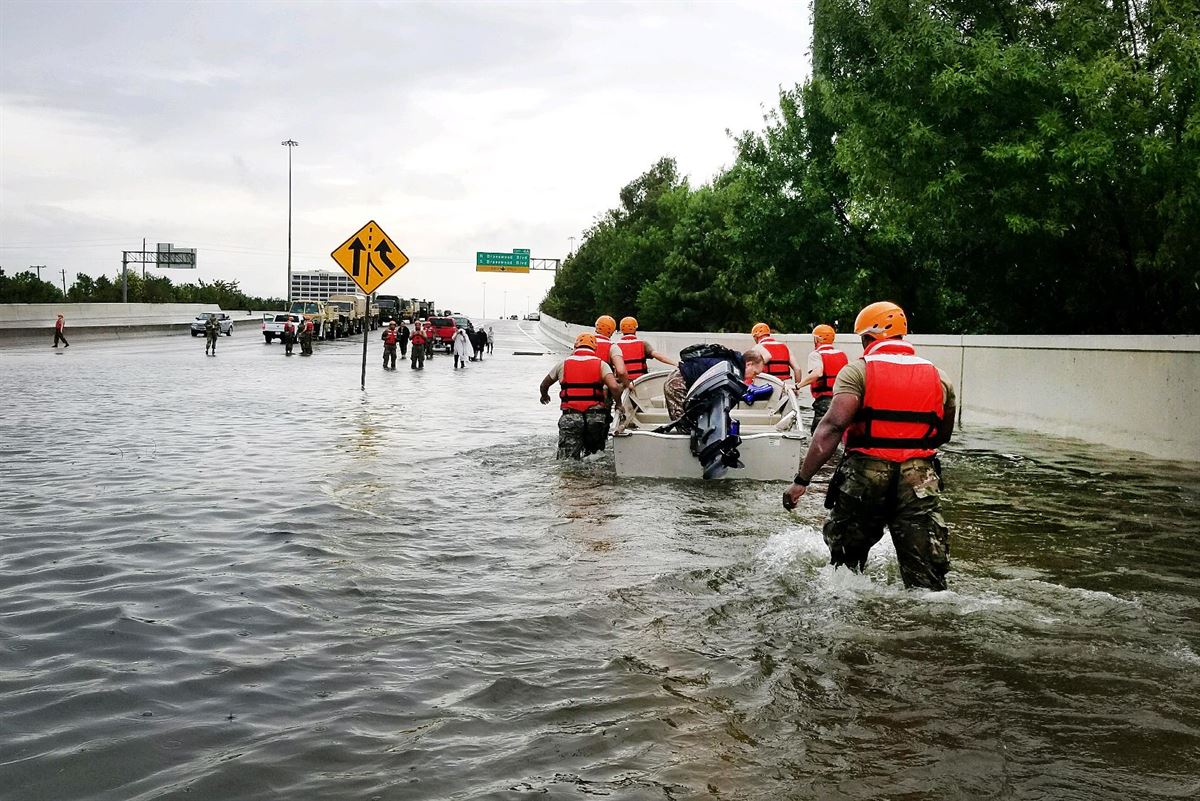 Texas National Guardsmen rescue a resident by boat during flooding caused by Hurricane Harvey in Houston. Photo courtesy of US Dept of Defense

Mary Beth Hughes vividly remembers the heartache as her hometown of Denham Springs, Louisiana endured catastrophic flooding a year ago.

Now the 2017 Mississippi College graduate is pained to see Hurricane Harvey driving up to 30,000 people to need shelters in the Houston area. The powerful Texas storm continues to pound the region and nearby Louisiana cities.

Mississippi College remains part of America’s response to the disaster. Leaders with the MC Student Government Association and the Mortar Board chapter are collecting supplies – from baby formula to water, and clothing to assist shelters in Houston. MC people are also making donations to aid relief efforts.

“Seeing how people have stepped up in the wake of Harvey restores my faith in the American spirit,” Hughes says. As an MC senior, she rallied students on the Clinton campus to help the recovery in storm-ravaged Denham Springs. Some MC students traveled to her hometown to pitch in.

The Cajun Navy in Louisiana provided tremendous support during the crisis in Denham Springs. And now the volunteers with their boats are aiding Texans facing emergencies.

“They saved thousands during last year’s flooding in Louisiana and quickly answered the call to help in Texas,” says Hughes. “South Louisiana is organizing volunteers, donations and sending boats and supplies to Houston.”

Mississippi College students, faculty and staff will make donations in the school cafeteria from 7 a.m. until 7 p.m. on August 31. The campaign continues on September 1. Bedding, towels, clothing, water and other essentials will be collected for families in Houston shelters. There will also be donation boxes in every academic building on the Clinton campus.

Jonathan Ambrose, assistant vice president for student affairs, supports the university’s response to the devastation. “This is a testament of the MC family as our campus community is brought together in efforts like these as a witness to the institution’s core values.”

FEMA’s Richard Elliott Morris, a Mississippi College communication graduate, is helping the federal agency’s operations in the Lone Star State. “As someone who went through Hurricane Katrina 12 years ago, my heart truly aches for those effected in Texas,” the Ridgeland resident posted on Facebook.

Former Texas resident Will Bishop, the MC Music Department’s new director of worship leadership, is following the storm’s aftermath. He served on staff at Mobberly Baptist Church in Longview, Texas before moving to Clinton this summer. The Texas church sits 230 miles from Houston.

Seeing the misery of flood victims on news reports brings the tragedy home to millions of Americans. Thousands of Texans were rescued from rooftops.

“The pictures and stories coming from the Texas Gulf Coast and the Texas area are truly heartbreaking,” Bishop said. “The impact of this disaster will be felt in those areas for years, maybe even decades to come.”

Members of churches across the USA, the Salvation Army, Red Cross and first responders are dealing with the region’s recovery. “The most powerful thing we can do is pray,” Bishop said. “God can do more in one millisecond than all our combined power, effort or funding could accomplish in a lifetime.”

The storm impacted loved ones of Brenda Holloway, administrative assistant with MC’s Baptist Student Union. Her sister and family live in Beaumont, Texas, an area slammed by torrential rains, strong winds and flooding. Her sister’s husband is pastor of Calvary Baptist Church in Beaumont. Nathan and Vicki Cothen are graduates of Baptist-affiliated Mississippi College. “Tremendous devastation and widespread flooding is too overwhelming to grasp,” Vicki Cothen said. “There are still many rescues needed.”