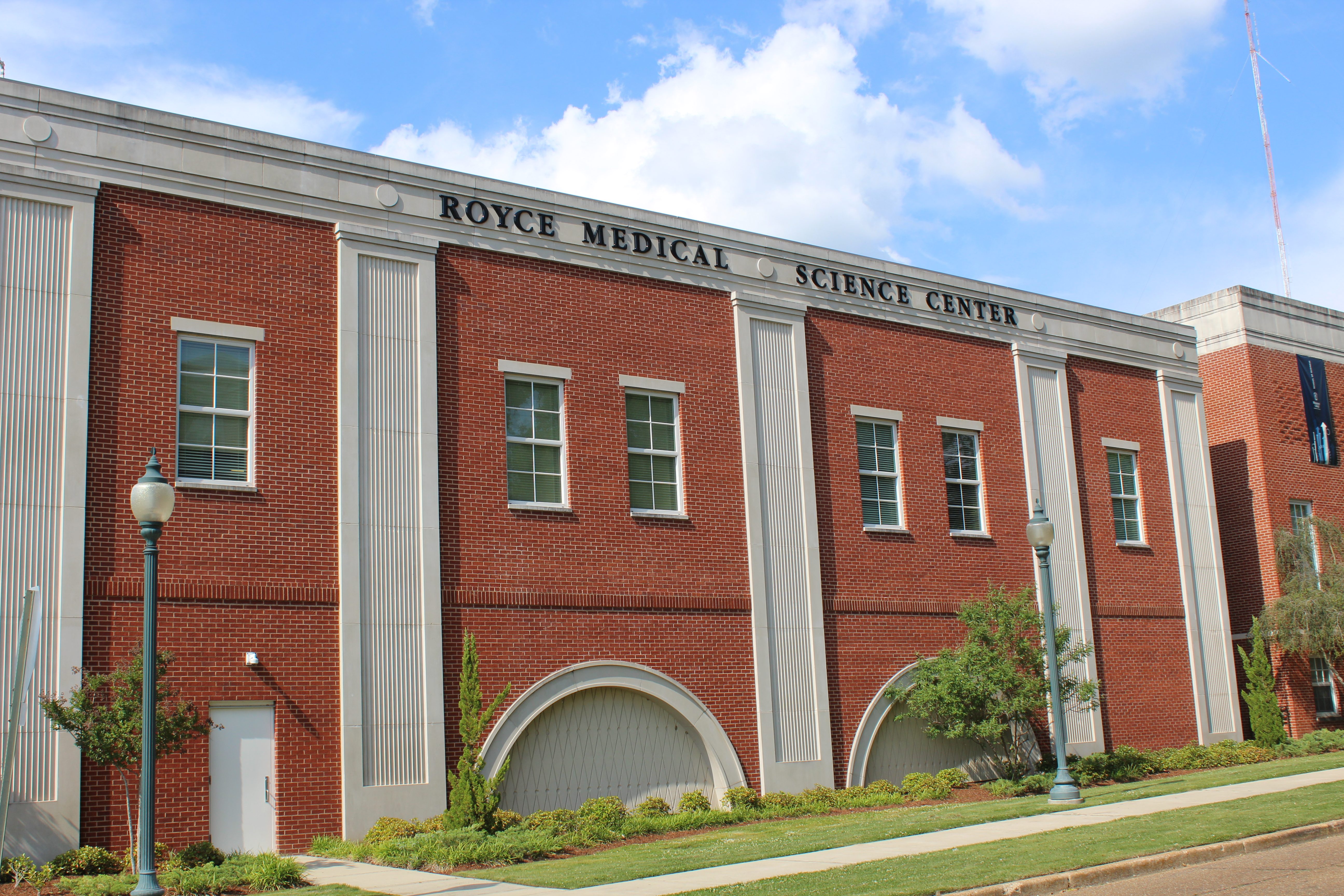 Mississippi College students are elated to see the signs go up on the exterior of the Royce Medical Science Center.

Fifteen inches tall, the black letters were posted by workers Tuesday at the 22,000-square-foot facility. The signs are seen on one side of the spacious brick building along College Street, and the other along Capitol Street.

Featuring cadaver and histology labs, lecture halls, additional research space, as well as faculty offices, the 21st Century building remains one of the academic treasures on the Clinton campus.

Retiring in late June, President Lee Royce provided superb service as the leader of the Christian university for 16 years. Naming the building in his honor is truly fitting, says MC senior Alex Rodriguez of Houston, Texas.

“His legacy is pretty big. He changed a lot about the campus,” adds Rodriguez, 20, a former Student Government Association vice president. “This is great.”

A business administration student Alex has many friends majoring in the sciences at MC. And they rave about the many academic strengths of the building that opened in January 2013. It is home to fully furnished classrooms, labs and the latest technology to prepare students for medical and dental schools. Many courses in the university’s pre-med curriculum are taught at the medical school level.

As they packed up their cars and trucks to head home with final exams wrapping up, students like junior Liz Skirkey spotted the Royce signs on the Medical Science Center on May 1.

“It looks very beautiful,” says Skirkey, an interior design student from Merrimack, New Hampshire.  Moments later, she returned to her task of loading the truck to make the journey home.

Nursing major Abby Rowland spent many hours learning in the medical building. The sophomore from Jackson has taken biology and chemistry classes there, among others. The facility, is “very state of the art.”

When it opened, the building was viewed as a huge recruiting tool for students. Its 4,800-square-foot gross anatomy lab is a must-see stop for parents, other family members and prospective students. The structure is adjacent to the Hederman Science Building.

Prior to the building’s opening, Dr. Stan Baldwin, dean of the School of Science and Mathematics, said the new facility meets expansion needs. It will accommodate “the phenomenal growth in the biology program,” he said.

Baldwin created and headed the master of medical science program that trains graduates for medical and dental schools or engage in medical research. The MC program began with fewer than 20 students in 2005. It enrolls more than 200 full-time students from over 130 colleges and universities across the USA and Canada. It also has enrolled physicians from India who study at MC before taking medical boards allowing them to practice in the United States.

“The acceptance rate into medical school for students who complete this program is very good,” Baldwin said.

The Royce Medical Science Center is aptly named for a Mississippi College president who’s done so much for the Baptist-affiliated university, says MC junior Rebecca Lee, 21, of Clinton. Dr. Royce also has stayed closely involved with students since arriving in 2002.

When it snowed in Central Mississippi, including Mississippi College, a few months ago, Dr. Royce didn’t remain in his office in Nelson Hall, she said. The MC leader took part in a friendly snowball fight with students. He’s also known to toss Frisbees on the Quad with undergraduates.

Other tributes commending the extraordinary service of Lee Royce and his wife, Rhoda, are visible on the Clinton campus. The Rhoda Royce Prayer Garden near Alumni Hall was recently named in her honor.