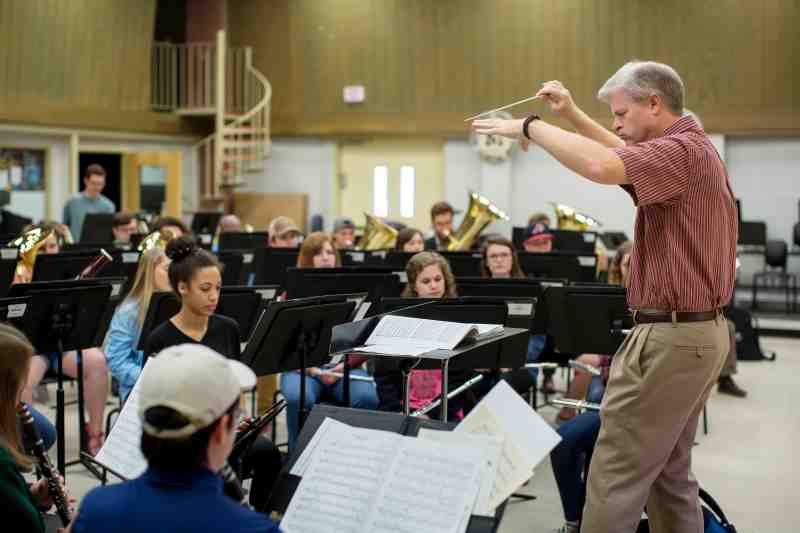 The Mississippi College Symphonic Winds Orchestra split into two groups due to social distancing requirements on the Clinton campus.

The changes are part of the health protocols in place at MC in the midst of the COVID-19 pandemic.

This fall, a Woodwind Ensemble is rehearsing for a fall performance. And so is a Brass & Percussion Ensemble on the same evening. Band director Craig Young will conduct both groups. Audiences are invited to their concert at 7:30 p.m. Tuesday, November 10, in Anderson Hall.

Why the change of venue to Anderson Hall? Traditionally, the MC Symphonic Winds performs in Swor Auditorium from one year to the next.

"We are going to have it in Anderson Hall so that we can spread out,” Young said.

Audience members will consist of MC students, faculty and staff. But there are other ways to watch the performances. The Music Department production will be live-streamed for parents, alumni and other school supporters.

Going to a different venue and breaking up the MC Symphonic Winds hasn’t been easy.

“It has been a challenge, for sure, especially to find a good repertoire for each group, but it has also been very rewarding,” Young said. “And I’m having a great time making music again with these talented and dedicated student musicians.”

The program will feature a Woodwind Ensemble production of an overture by brilliant Classical period composers like Wolfgang Amadeus Mozart, who died in Vienna, Austria, in 1791. Both ensembles will join forces for the “Harry Potter Symphonic Suite” by composer John Williams. “An Original Suite for Military Band” by Gordon Jacob will be among the pieces performed by the Woodwind Ensemble.

The free concert in Anderson Hall is and open to the university’s campus family. The concert is live streamed on the Music Department’s YouTube channels.

Among the area musicians in the two ensembles are Caitlin Carter of Clinton on flute, Elizabeth Hammons of Pearl and Mary Schneider of Ridgeland, both on clarinet, as well as Pearl residents Andrew Brown and Hunter Gibson on trumpet. Trombonists include Jalen Dear of Bolton, Matthew Knight of Florence, Jonathan Johnson of Clinton and Brandon Strain of Madison. Performing on tuba is Bryant Thaxton of Richland. Percussionists are Machaela Laird and JT McNamee, both of Clinton.

Music lovers on the Clinton campus are also invited to see the MC Jazz Band concert on November 5. The program begins at 7:30 p.m. in Anderson Hall. The concert is free.