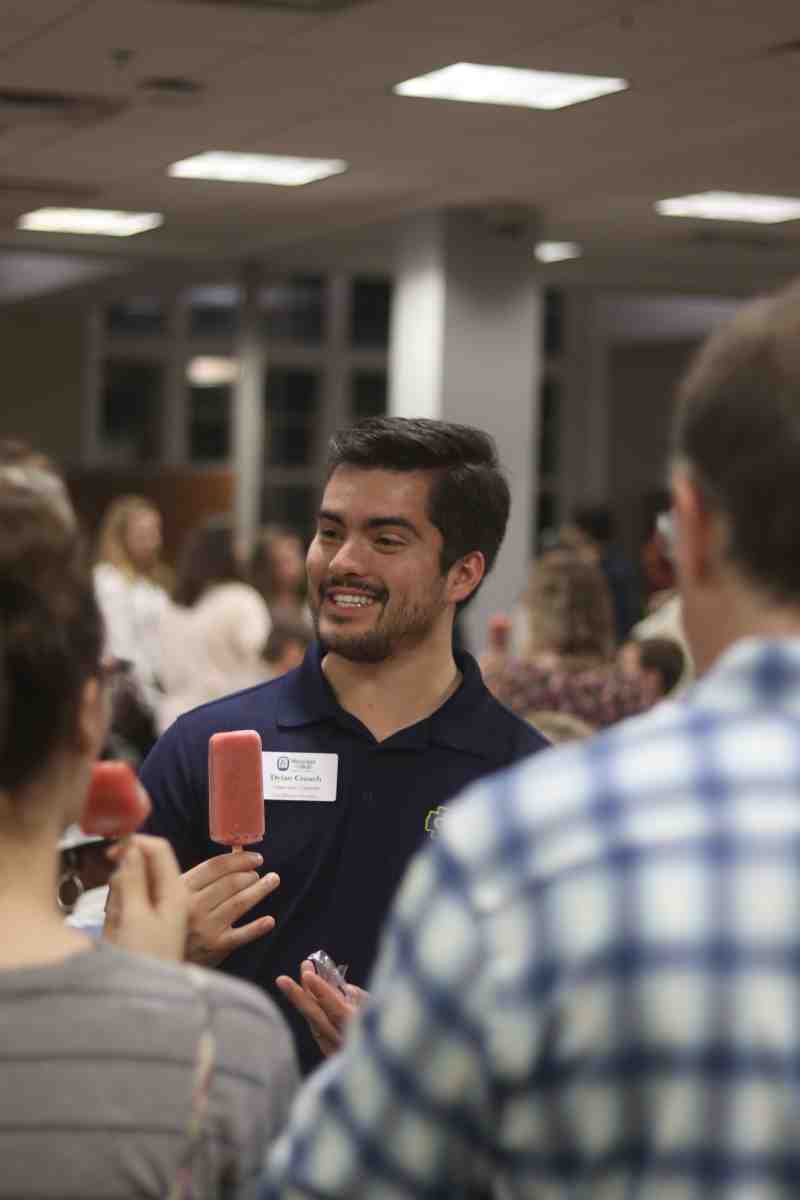 Mississippi College’s special day to attract high school juniors proved to be a success despite storms pelting the area Thursday.

Eighty students from schools across Mississippi and as far away as California, Ohio and Florida made the journey to learn more about an education at the Christian university.

Admissions office staffers sponsored Juniors Day and informed the visitors about academics, organizations and life on the Clinton campus. Founded in 1826, 5,000-student MC is the nation’s 2nd oldest Baptist college.

“I like how it is Christian-based and so involved with Christ,” said Jonathan Barnes, 17, a junior at Pillow Academy in Greenwood. His Dad attended MC and so do several friends. “I like the small classes.”

Huddled in the admissions office in the Nelson Hall basement, Jonathan, and his sister Emily, 16, constantly checked their cell phones for the latest weather news.  Thunderstorms brought flash flooding in some part of the state along with tornado warnings along with the sound of sirens.

Like other MC visitors on April 18, Jonathan Barnes and his sister stayed calm as steady rains hit Central Mississippi communities. “It happens,” Jonathan said. He’s experienced bad weather before in the Mississippi Delta.

Sitting in the admissions office for an hour during the peak of the storms, prospective students still enjoyed their visit to Clinton.

Mississippi College admissions staffers will host a similar event again next year, but hopefully during a beautiful Spring day.

Under dark cloudy skies, rain held off until 2 p.m. and then it poured on the Clinton campus for a few hours. No worries for a Midwest family. “I absolutely loved today,” said Mikayla Mayes, a student at Continental High in Continental, Ohio.

Her hometown is 45-minutes away from Fort Wayne, Indiana or Toledo, Ohio. It was a 13-hour drive for Mikayla and her parents (Gene & Michelle Mayes) to reach Mississippi College. The family plans to see more of Mississippi College on Friday.

Two miles west of Clinton off I-20, construction continues on the Continental Tire plant.  Set to open in late 2019, the huge plant will produce large truck and bus tires. The family from Continental, Ohio may have a look before heading home.

The drive is less than an hour for Lily Kaczkowski, a junior at McLaurin High near Florence. “It was a fun experience,” despite the rain, said the Rankin County resident.

In fact, with powerful storms hitting the area, Lily noted, it made Juniors Day at Mississippi College something she will never forget.

Lily Kaczkowski, 16, wants to study communication if she enrolls. Making an MC education more attractive is the university’s new Honors College that welcomes its first 14 freshmen in Fall 2019. Honors College students will receive four-year scholarships paying all of their college costs.

President Blake Thompson announced the creation of the Honors College and expansion of international programs during his March 29 inauguration address.

Hundreds of high school students are invited to MC’s Fall 2019 Preview Day on September 14. They can attend classes, grab lunch, cheer for the Choctaws football team, meet President Thompson and get to know student leaders.