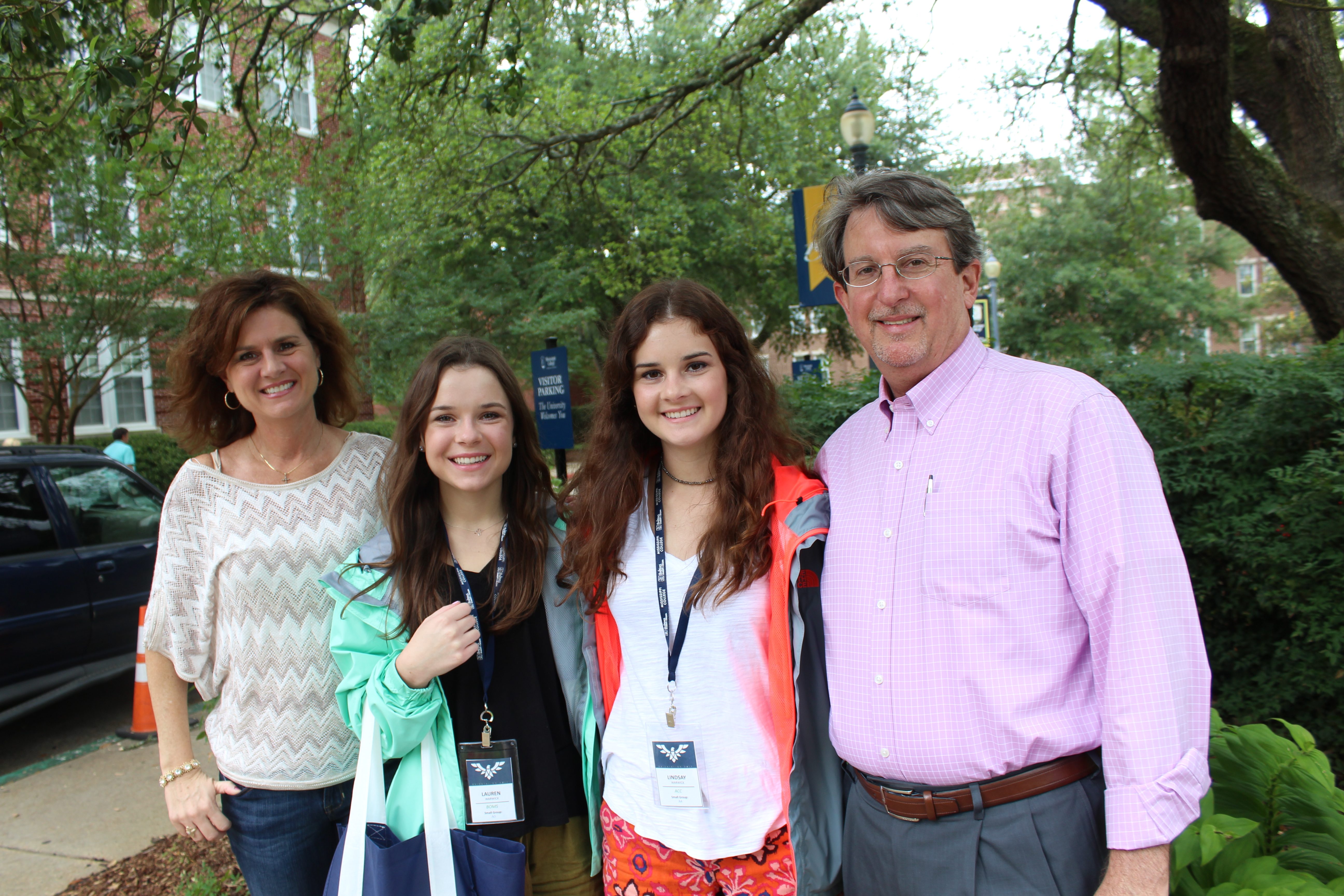 Mississippi College's first summer 2017 orientation for incoming freshmen was a family affair. Pictured on June 1 are MC students Lauren & Lindsay Warwick of Jackson. The 19-year-old Jackson Prep graduates are flanked by their parents Tracey and Tony Warwick on the Clinton campus.

Amy Riley and Skylar Smith have stayed best friends since the fifth grade. So it’s worked out well that the Lafayette, Louisiana teens will soon become Mississippi College freshmen.

To ensure that things get off to a good start, the Westminster Christian Academy graduates joined more than 200 students attending MC’s freshmen orientation June 1-2. The visitors registered for classes, learned about student organizations, spent the night in residence halls, dined in the cafeteria and had a little fun. There are more freshmen orientations booked later this summer.

Amy, 18, and Skylar, 17, won’t need to walk very far on the Clinton campus to bump into friends from back home in the Bayou State. Seven students with the Westminster Christian Academy Class of 2017 begin Fall classes at Mississippi College in late August.

The Louisiana girls attended MC Preview Day during their junior year in high school. Before very long, they got hooked and decided to become MC Choctaws.

They didn’t want to attend a big university. They felt the people on the Clinton campus were nice and friendly. And the teens believed the 191-year-old university was where God wanted them to be.

During orientation, students from across the Southeast and other parts of the nation stayed busy for two days. During their stay, they visited the cadaver lab in the Medical Sciences Building, met with professors, posed for plenty of pictures, and took campus tours.

There was a blitz of meetings scheduled for parents too. Orientation sessions covered financial aid, scholarships, student organizations, Christian ministries, Choctaws sports teams, and much more about life on the Clinton campus.

Other aspects of life at the 5,200-student university attracted incoming freshmen like Ellie Kate Tradup. The 18-year-old public relations major from Dallas looks forward to riding horses on the Christian university’s equestrian team. The Texas home schooler competed in equestrian events in the Lone Star State.

Her recent visit to Providence Hill Farm, home of the MC Lady Choctaws equestrian team, helped convince her to come. “Seeing the farm made it perfect,” Ellie Kate said Friday. “I wanted to be at a Christian school.”

Summer orientation proved to be helpful to her mom, Lori Tradup. “It gave me great confidence having my daughter six hours down the road. I met some amazing people.”

There will be at least a couple of sets of twins among the Mississippi College newcomers in the Fall.

Lindsay Warwick, and her 19-year-old twin sister, Lauren, are delighted to join the Mississippi College family.

Lindsay will be a biology major and Lauren plans to study biology. The Jackson Prep grads attend First Baptist Church Jackson. The daughters of Tony & Tracey Warwick of Jackson bring solid MC roots. Grandfather John Ainsworth, 75, is a graduate of the former Jackson School of Law that became MC Law in 1975.

MC’s first-class academic programs, its Christian environment and location near the capital city of Jackson were factors encouraging the twins to sign up for classes.