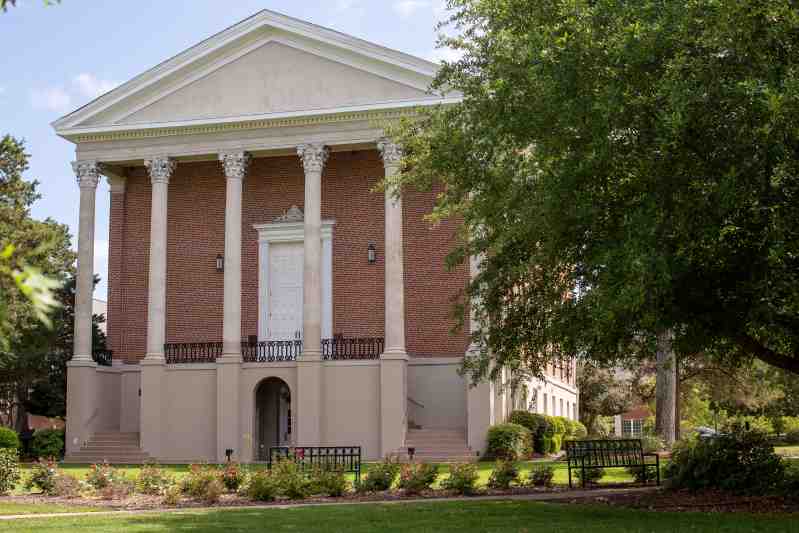 Constructed in the first decade of Baptist operation of Mississippi College, Provine Chapel predates the Civil War. It links the modern Christian University to its illustrious past that is celebrated during Founders Day.

As the oldest institution of higher learning in the state and the second-oldest Baptist-affiliated college in the country, Mississippi College occupies a unique place in the history of the state and of the nation.

That history will be recognized on Tuesday, Jan. 25, when MC faculty, staff, and students fill the pedestrian walkway between Nelson Hall and the B.C. Rogers Student Center to celebrate Founders Day, the 196th anniversary of the date the Christian University was established.

Following a brief acknowledgment of the school’s founding during chapel services in Swor Auditorium, ample pieces of delicious cake – resplendent with blue and gold frosting – and piping hot coffee will be served along the walkway by Campus Dining staff. The cake will come from Meme’s Brickstreet Bakery in Clinton’s historic Olde Towne business district, while the coffee will be from the BeanFruit Coffee Company owned by Paul Bonds, an MC alumnus.

The treats will be sure to help put the MC Family in a celebratory spirit on a brisk winter morning, while a photo booth will capture images of celebrants almost 200 years after the Mississippi Legislature passed the act establishing Hampstead Academy on five acres of land in Hinds County.

The Christian University known for academic excellence and commitment to the cause of Christ has grown to offer more than 80 undergraduate majors, more than 50 graduate areas of study, three doctoral programs, a law school, and one of the state’s leading physician assistant programs.

Last fall, MC was ranked as the state’s top-performing university – public or private – at the most reasonable cost to undergraduates by WalletHub, a Washington D.C.-based credit-reporting and reviewing site famous for cutting-edge financial counseling and information services. It was the fourth time in 2021 MC had been included in listings of the nation’s best colleges and universities by notable media organizations. The others included the Wall Street Journal/Times Higher Education, U.S. News and World Report, and the Princeton Review.

Heather Moore, head of special collections at MC’s Leland Speed Library, said the University’s “interesting and significant” history is well worth celebrating, and is especially poignant during the uncertainty of the current COVID-19 pandemic.

“We were founded in 1826 because the community wanted to provide educational advantages to their sons and daughters,” Moore said. “Celebrating Founders Day is a great way to remind people that MC has been around for over 195 years, that we have gone through hardships and had times of great growth, and that God has seen us through it all.

“Not all universities celebrate their Founders Day, but our celebration helps remind everyone how important our history and heritage is.”

Inextricably linked to the surrounding Clinton community, MC has survived the Civil War, the Great Depression, and two world wars. A far bigger extravaganza is planned for 2026 to showcase the Christian University’s bicentennial.