MC Alert: MC operations on the Clinton campus and at MC Law in Jackson will close at 3:30 p.m. on Tuesday, Nov. 29, in anticipation of severe weather. All classes at both the main campus and the law school beginning after 3:30 p.m. are canceled. Please monitor local conditions and stay weather aware.
Posted Thursday, June 22, 2017 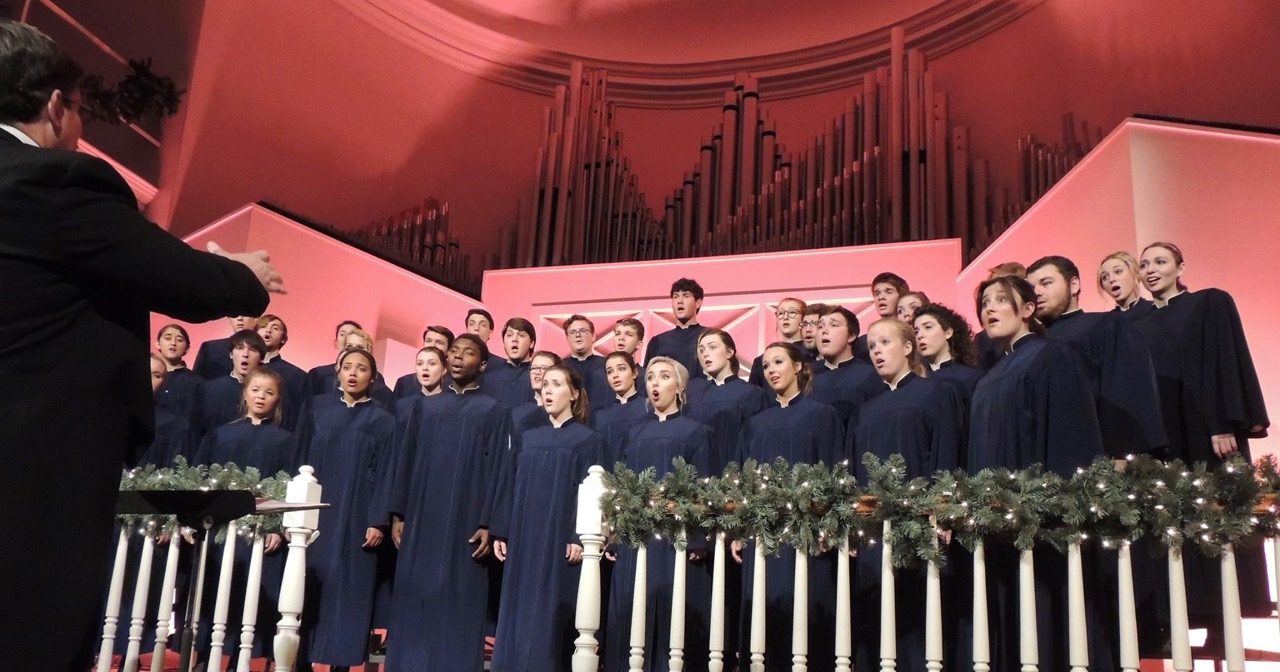 Mississippi College Singers performing at the Festival of Lights impress audiences each year as they showcase the start of the Christmas season.

For the first time last December, Mississippi Public Broadcasting cameras captured the wonderful concert at Provine Chapel and aired the program statewide. The festival has remained a holiday tradition for more than three decades on the Clinton campus.

MPB’s live broadcast across the Magnolia State was recently honored by the National Academy of Television Arts & Sciences. The broadcast of the TV program filmed at MC was among five Southeast Emmy Awards granted to MPB.

The news was announced June 10 at an awards presentation at Atlanta’s Grand Hyatt hotel. Leaders of the MC Music Department are ecstatic.

“The collaboration of the MC Music Department and MPB was a joy in every way,” said Angela Willoughby, who chairs the department. “Their production staff was innovative, responsive and thorough from the preparation, through the filming and post-production phase.”

The skills shown by the MPB staff, she added, was equal to the “musical artistry of the MC Singers in the performance.”

The technical work of the MPB staff, he said, was “superb and they knew how to maximize the acoustics of Provine Chapel to get what is being recognized regionally as the finest live recording of the year.”

He lauded the work of dozens of members of the MC Singers. “I’m thrilled that these talented and hard-working MC students see their efforts rewarded with such a high level of recognition,” Nabholz said.

The MC Singers seek to team with MPB for the upcoming Festival of Lights broadcast in December 2017.

The premier singing group at America’s second oldest Baptist college continues to be booked for concerts in the USA and overseas.

Following the 2017 Festival of Lights, the MC Singers will travel to Europe to perform the same holiday program in Vienna, Prague and Budapest between December 27 and January 6. In each city, the MC Singers will partner with Baptist churches to spread the good news about the birth of Jesus Christ.

The MC Singers will also perform at the Mississippi American Choral Directors Association Conference in Hattiesburg in March 2018. Their audience will be hundreds of junior and senior high students, the best singers at their schools.

The regional awards for Jackson-based Mississippi Public Broadcasting represent quite an accomplishment for its gifted staff. MPB’s Taiwo Gaynor saw his name appear on four of the five regional Emmy awards, including the live production at Mississippi College. “I am so grateful for my MPB team right now. It takes so many people to create the great programs that we are so very proud of.”

Gaynor serves as director of post production. MPB’s John Busbice also received an award with Gaynor for the MC Festival of Lights concert.

“It truly takes everyone to do the work that we do,” Gaynor added.

Since 1970, Mississippi Public Broadcasting has won over 400 major awards. Another one of its regional Emmy awards in June was for the TV program Ed Said. It is the name of the MPB puppet that raps to children about the importance of healthy eating.