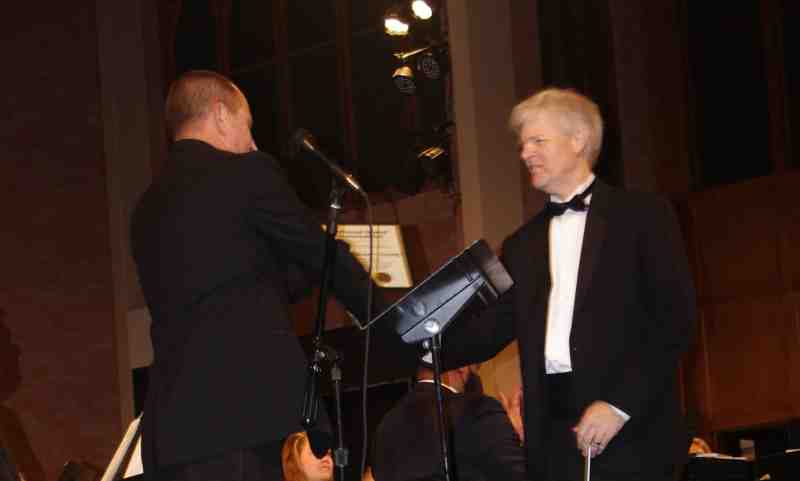 After more than two decades of cultivating and developing much of Mississippi’s instrumental music talent as director of bands and professor of music at Mississippi College, Dr. Craig Young’s last performance in the Magnolia State June 21 included an unexpected surprise.

Before directing the Mississippi Wind Symphony’s final selection of its summer concert series at the Belhaven University Center for the Arts in Jackson, Young yielded the podium for a planned presentation.

It wasn’t until Dr. Casey Kirk, director of bands at Belhaven and a former student of Young’s at MC, stepped to the stage that the conductor discovered he was the reason for the interruption. Kirk presented Young with a Citation of Excellence from the National Band Association Executive Committee, recognizing his outstanding contribution to bands and band music.

“Dr. Young was, and continues to be, a mentor to me and an aspiration in music education,” Kirk said. “Some of his most admirable qualities are humility and selfless service – he never seeks attention and has always redirected his achievements to others.

“As a music professor, Craig ignited a passion for music within me, from teaching band to conducting to studying music literature and performing my instrument at a high standard. This passion has led me on many different paths. It’s a very high honor for me to host his last concert in Mississippi at the school that I now teach at, for if he were not the influence that he is, I would simply not be in this profession today.”

The largest professional organization for bands in the world, the National Band Association, promotes the musical and educational significance of bands and is dedicated to attaining a high level of excellence for bands and band music.

“Through professional leadership, you have inspired and motivated excellence in musical performance,” read the document. “Your record of service to our profession is one of which you may be justifiably proud, and it will serve as a model to others.”

“It’s a wonderful honor,” Young said. “It was quite unexpected. The whole concert was very emotional – there was a moment where you realize it’s the last time you will be performing here – and the citation certainly added to that.

“It was one of those moments that you never forget.”

Following the presentation, the resulting applause reverberated throughout the auditorium and communicated to Young that the rich musical legacy he has built in Mississippi will not soon be forgotten.

“The Citation of Excellence is a highly coveted award among band directors that recognizes their achievements for excellence in the performance of wind literature,” Kirk said. “Throughout his time in Mississippi, Craig has been a catalyst for music education within the state, from conducting various concerts with the MC band and Mississippi Wind Symphony, to constantly working with high school bands and conducting various Honor Bands.

“In addition, he has performed routinely with the Mississippi Symphony Orchestra and is a very much sought performer on the saxophone within the state.”

Young’s colleagues at MC have marveled at his unparalleled efficiency, knowledge, and drive while leading the Instrumental Department, conducting Symphonic Winds, directing the MC Pep Band, and teaching all courses related to undergraduate and graduate Instrumental Music Education.

“He’s been the center of everything instrumental at MC for over 20 years,” said Dr. Ben Williams, chair of the Department of Music at MC who plays bassoon in the Mississippi Wind Symphony. “All the bands at MC centered around Craig. He’s brought together so much that we’ve benefitted from for 20 years.

“He’s so bright and excited for everything that he does. He’s amazing. We will miss Craig, for sure.”

Young founded the Mississippi Wind Symphony in 2001 and has served as musical director of the volunteer ensemble, comprised mostly of wind and percussion musicians from the Mississippi Symphony Orchestra, area band directors, and local musicians.

“Our performers are among the most talented musicians in the state and region, yet they give up their time freely to perform excellent music for our audiences, all without earning a cent,” said Kirk, a founding member of and percussionist in the wind symphony. “Participation in the group has evolved into an expected summer experience that we all look forward to playing in.

“Dr. Young heading the group for 20 years is a testament to his leadership.”

Unable to perform in 2020-21 because of pandemic restrictions, the wind symphony embarked upon its deferred 20th anniversary celebration concert at Belhaven, which was the wind symphony’s 40th – and perhaps final – performance under Young’s baton.

“The Mississippi Wind Symphony is one of the things I’m most proud of,” Young said. “There are a lot of community bands, but this one is far different because it has all these professional musicians who come together to perform band music because they enjoy doing it. It’s really a remarkable ensemble.

“We do three or four rehearsals and a concert twice each summer. That’s it. That’s hard stuff, and it just shows what level this ensemble is on.”

Another point of pride during his tenure at Mississippi College are the relationships he has fostered with MC faculty and students.

Young will be leaving MC in mid-July for the “Show Me” state of Missouri, where he will be returning a favor granted to him by his wife.

“She has been here in Mississippi with me all this time,” Young said. “She found a job that she liked in Columbia, so I told her, ‘We’ve been here for 23 years, now it’s time for me to follow you.’”

No matter where Young chooses to live, Kirk said his influence will be felt by everyone he comes across.

“Good teachers are the kind of heroes that are never recognized for what they do, but without them, the world would be a much darker place,” he said. “Craig is one of those types of heroes, a true life-saver whose skill is bringing forth God’s great creation of music to his students.”