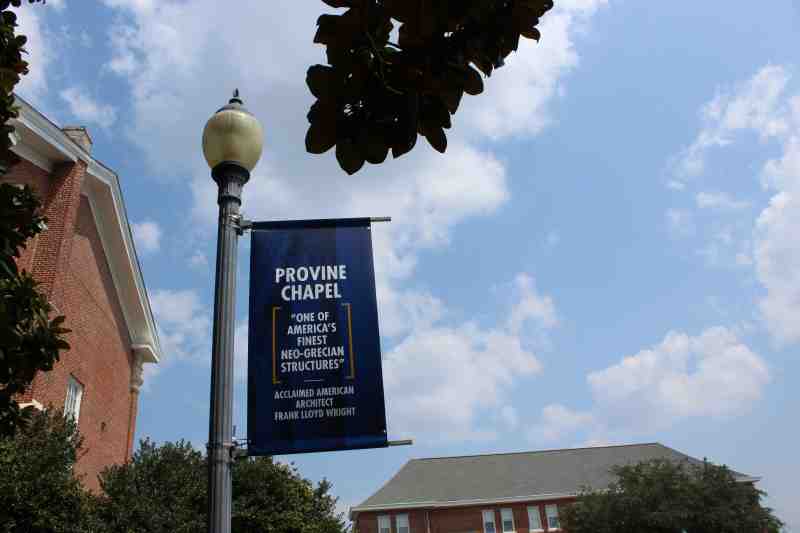 Mississippi College showcases its rich history dating back to 1826 with a series of new banners.

Building landmarks like Provine Chapel and Jennings Hall are highlighted in blue and gold banners decorating light poles along the Clinton campus. The banners spell out interesting facts such as MC becoming America’s first coed college to grant degrees to women.

MC senior Mary Wheatley, 22, of Seattle, Washington says the new banners should especially appeal to more than 600 new freshmen. Many members of the Class of 2022, she said, may not know some of the interesting facts about the university’s history.

Pointing out MC was the first coed college in the USA to grant degrees to two women in 1831 is one banner that makes an impression with Wheatley. “It’s very empowering, and a good thing to know,” says the kinesiology major on track to graduate in December.

A second banner highlighting the beauty of Jennings Hall grabbed her attention, too. Her grandmother lived in the former residence hall as a Mississippi College student in the 1950s, she said. Residents decades ago were known as “Jennings Girls.” Jennings Hall was considered among the South’s finest dormitories when it opened in 1907.

These days Jennings Hall is home to a glass elevator and scenic courtyard with large fountains where Shakespearean plays have been staged. The red brick facility houses classrooms as well as faculty offices including the English Department, Modern Languages, and History & Political Science. The Jennings Annex was once a popular cafeteria for students and employees.

The blitz of new banners on the Clinton campus coincides with the start of Mississippi College’s 193rd academic year. It comes amid the early stages of the administration of President Blake Thompson. The Rienzi, Mississippi native began his duties as MC’s 20th president on July 1.

In a recent Tweet, Dr. Thompson commented on the new banners. “I love these new banners around campus with MC facts on them. I hope you do, too! What’s your favorite fact?”

One banner highlights a little-known piece of history, saying a portion of the Mississippi College campus once was part of the original Natchez Trace. It is also noted on a marker posted across College Street nearby First Baptist Church Clinton.

Another banner tells visitors that famed American architect Frank Lloyd Wright praised Provine Chapel as one of America’s finest Neo-Grecian structures. After opening in 1860, the chapel was converted into a hospital for the wounded troops of U.S. General Ulysses S. Grant during the Civil War. With stately white columns out front, Provine Chapel stands tall as MC’s oldest building.

Mississippi College public relations director Tracey Harrison worked with Dr. Thompson this summer to coordinate the unveiling of the banners.

About two years ago, Harrison also spent months organizing the project in Nelson Hall promoting Mississippi College history. The display in the administration building is filled with photographs of the institution’s milestones and noteworthy MC people, from student-athletes to faculty and alumni. It contains artifacts including freshmen beanie caps and athletic jackets from a bygone era.

Mississippi College will always remain a significant part of the history of its hometown of Clinton, says Harrison, president of the Clinton Chamber of Commerce. “MC partnerships with Clinton date back many years and keep growing stronger today.”

Harrison encourages visitors to see the Nelson Hall exhibit and stop by the Leland Speed Library’s MC archives to learn more about the college’s history.

It’s not very far off, as Mississippi College leaders are mentioning the Christian university’s 200th anniversary celebration coming in 2026.