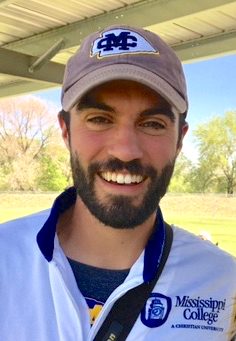 That’s really saying something for the new Mississippi College graduate who’s shined throughout his career on the national stage as an archer for the Blue & Gold.

A resident of Tallmadge, Ohio, Parker edged a University of the Cumberlands rival to get the gold medal. It happened at the 2017 United States Intercollegiate Collegiate Archery Championships in Yankton, South Dakota May 11-14.

He’s been an amazing student-athlete since setting foot on the Clinton campus a few years ago. National recognition for Parker’s skills shooting arrows is nothing new. In March 2016, Parker was named the No. 1 male bow hunter at the U.S. Collegiate Archery National Indoor Championships.

A business administration graduate, Parker remains an excellent Mississippi College role model and stellar teammate. His faith is a big part of his DNA. “We want to represent the school and Christ well by the way we shoot.”

Among his many achievements, Parker Battista gained first place All-American honors in archery for the men’s team at season’s end. He’s also an All-American (first place) for academics among male archers.

“Parker’s gold medal caps off his prestigious career and he may continue to pursue competitive archery after college,” says Jim Turcotte, the MC administrator who oversees the coed team. “Parker is also a very strong student.”

Battista’s ability to hit targets with precision combine with a first-class archery team. MC earned a 4th place finish among 11 squads at the college tournament in South Dakota.

“His achievements and that of the team is quite impressive given that MC has fielded a competitive archery team for only the past three years,” Turcotte added.

MC’s strong showing in archery this past season should boost recruitment. “Our performance can only enhance our recruiting as we had the single best year in our young history,” Turcotte said. “We expect to have 15 new archers next season and will draw students from all over the nation.”

Next May, Mississippi College will host the national collegiate archery championships at the Baptist-affiliated university’s cross country course, Choctaw Trails. It is set for May 10-13. The 2018 event should provide a nice economic boost to the Clinton area. Waldo Cleland serves as the team’s coach.

Besides Parker Battista’s fantastic performance in the South Dakota tournament, others with the MC team did well with bows and arrows.

The MC men won a silver medal. The group included Battista, Daniel Brickhouse, a May graduate from Mobile, Alabama, and Kai Wang of Shanghai, China. The MC women’s team earned a bronze medal, and they include: Morgan Hamilton of Petal, Jessica Jasper, a May graduate from Brandon, and Kesi McGloster, a senior from Gastonia, North Carolina.

For more information on MC archery, contact Jim Turcotte at 601-925-3315 or turcotte@mc.edu