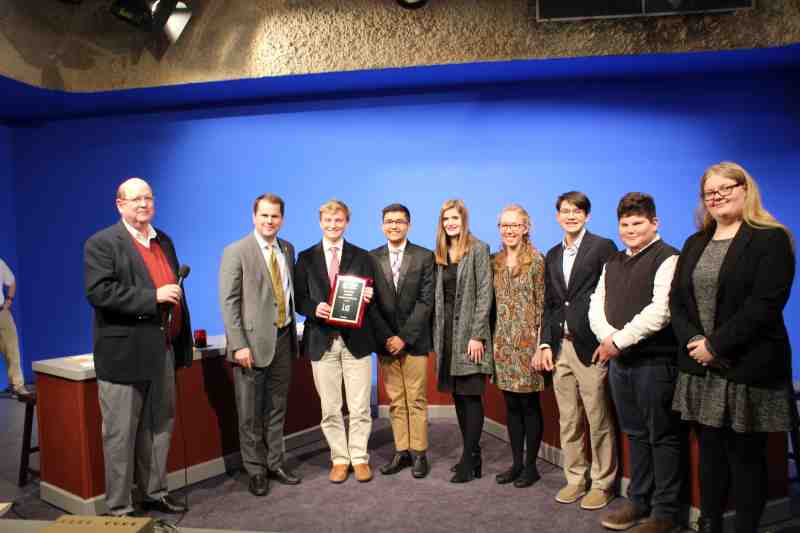 In the fourth and final round, Parklane students on December 5 edged their Jackson Prep counterparts from Flowood. The visitors from the private academy in Pike County prevailed by scoring 275 points to 265 for Jackson Prep.

Coming down to the wire, the finals were staged in the Leland Speed Library’s Learning Resources Center. MC President Blake Thompson congratulated students on both teams and did a little friendly recruiting.

Math professor Tommy Leavelle served as the moderator at the 36th annual Mississippi Academic Competition and tossed out the questions.

The captain of the quiz bowl team, Luke needed to leave quickly to catch the 80-mile ride home. Boarman was playing in a soccer game for the Parklane Pioneers squad in a contest that day versus Oak Forest Academy. A midfielder who wears No. 10, the Parklane Academy senior was selected the MaxPreps player of the game.

The Parklane students began preparing for the event in August. The teens spent nearly an hour daily practicing. They rapidly responded to questions at the tournament at Mississippi College, just like their Jackson Prep rivals.

“It was a lot of math,” Walker Willis said.

Willis and LeAnne Bradford along with 8th grader Josh Hartz rounded out the Parklane squad.

Henderson saluted the work of outstanding Parklane seniors and others who competed during the tournament. “It is truly rewarding to see their hard work result in such a memorable victory.”

The Mississippi College Office of Continuing Education sponsored the event.