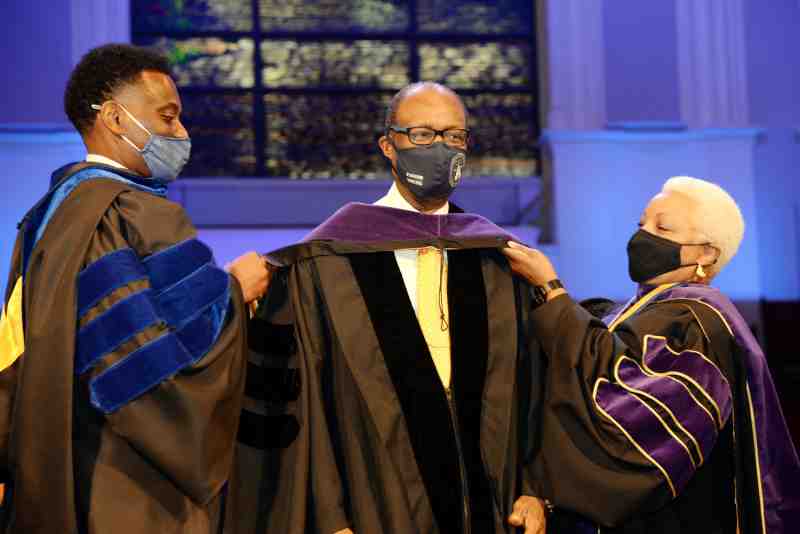 Pastor Jerry Young has faithfully led New Hope Baptist Church in Jackson since 1980, and the distinguished Mississippian has earned many honors ever since.

The son of a pastor, Dr. Young, felt called to preach and has done so quite well. Growing up in the heart of the Mississippi Delta during the Civil Rights era, he's been an influential preacher for generations. In September 2014, the Mississippi preacher was named the 18th president of the National Baptist Convention, USA. It is the largest African American Baptist Convention in America.

Getting this new recognition from the Mississippi College Law School on May 14 was the perfect setting. There are many attorneys and judges, including MC Law graduates, in his church on Beasley Road with more than 3,000 members.

Born on a Mississippi Delta plantation, Dr. Young spoke of the significance of the honorary doctorate moments before MC Law's Class of 2021 received their degrees.

“I am clear on this – my being here today is evidence of a sovereign God,” the pastor told hundreds in the audience at the massive church in the capital city.

Growing up in the Magnolia State, Young considered becoming a lawyer or a pastor. He carried the New Testament and a copy of the U.S. Constitution with him for years. But the Rust College graduate’s decision to become a preacher worked out exceedingly well. “I am honored,” he said of the recognition from Baptist-affiliated Mississippi College.

New Hope Baptist Church is a mission-driven institution with 44 ministries stretching from Honduras and Africa. "It takes teamwork to make the dream work!'' is the church's motto.

Young serves on the board of trustees at Belhaven University in Jackson and at Rust College, his alma mater, in Holly Springs. He received a master of divinity and a doctor of ministry from Reformed Theological Seminary in Jackson.

For his faithful work in the community and a long list of achievements, this venerable pastor is so deserving of MC Law’s honorary doctorate, university leaders say. For decades, he’s preached about the transforming gospel power of Jesus Christ at pulpits nationwide across racial and denominational lines.

During Friday’s ceremonies, Mississippi Bar President Jennifer Ingram Johnson of Hattiesburg challenged graduates to give back to the legal community. There are “many people in Mississippi who cannot afford legal representation.”

Being an attorney, Johnson said, will bring these future lawyers tremendous opportunities. It opens doors, she said, for them to be “making life better for those you represent. Wonderful opportunities await you in Mississippi. I sincerely hope you remain here for your legal career.”

Rebecca brings a deep commitment to public service as she begins her law career.

MC Law graduate Joseph Henry Van Every, 35, will work at his practice in Columbus, Mississippi. His impressions of MC Law? "I love it – a family atmosphere from the day they recruited you,” says the former petroleum landman.