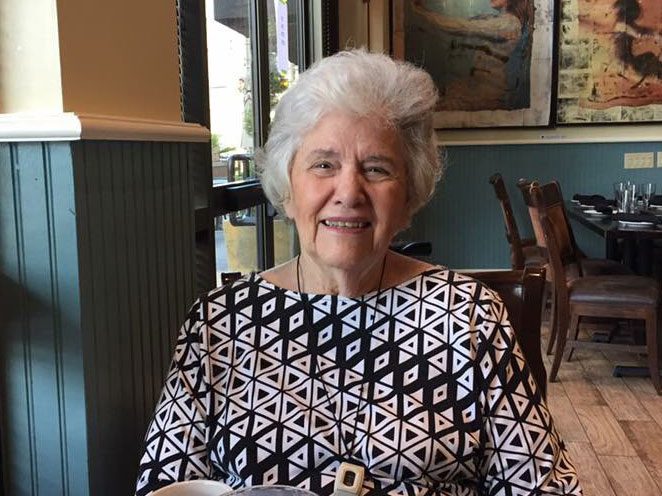 Jean Ross of Pelahatchie is a 1945 Mississippi College graduate

A 92-year-old Pelahatchie resident, Jean Ross cherishes all things Blue & Gold, because of deep family roots at the Baptist-affiliated university. The 1945 MC alumna met her husband, Knox Ross, Sr. on the Clinton campus in the 1940s. Fast forward to 2017. Her granddaughter, Rebecca Ross, is an MC senior and music education major.

“I just loved it and I still do,” Jean Ross said in a phone interview Wednesday from her home in Pelahatchie. “It was such a wonderful experience for me.”

Initially, the Simpson County native was bound for Mississippi University for Women in Columbus. But the 1942 Magee High graduate decided to attend a coeducational MC following its merger with all-female Hillman College in Clinton. It was a life-changing decision she never regretted. Jean once lived in the Mary Wyatt Cottage on the former Hillman campus now the site of the city’s Lions Club Park.

At the Baptist-affiliated school, Jean played lots of tennis, attended chapel daily, and stayed around campus all week since student cars were banned. She returned home to Simpson County once every six to eight weeks to reconnect with family.

Regulations on the Clinton campus were much different back then. MC women could only wear skirts and dresses. Strict evening curfews in residence halls were enforced for students.

While receiving a solid education at the Christian college, Jean got involved in a slew of activities – from class officer to member of the literary society to joining a mathematics organization.

Her 1945 MC diploma as a general science major was her ticket to attend the University of North Carolina for graduate school. Knox received her master’s in public education on the Chapel Hill campus. She began her career as a health educator in the Delta. But after a few years, Jean got married and raised four children. Upon moving to Pelahatchie in Rankin County, she ran a clothing business in the Rankin County community.

One of her children, former Pelahatchie Mayor Knox Ross will accompany his mom to the 50-Year-Club reunion. “She really lived the life so many women aspire to today.”

Mississippi College ties date back to Jean’s brother, Lacy George Horn, Jr. who enrolled at MC in the late 1930s. He graduated MC two years before Jean first enrolled in 1942 and became a longtime Vicksburg pediatrician. His wife, Libby Latimer, was a member of the Latimer family of Clinton. The Latimer House at Mississippi College is usually a must stop for MC graduates returning for Homecoming.

Jean Ross stays pretty active as a 92-year-old. The Mississippian enjoys attending the annual Muscadine Festival in her hometown of Pelahatchie. Asked about the secret to her long and successful life, she doesn’t miss a beat. “The Lord’s blessed me.”

Knox Ross says MC remains a wonderful college for his mother and now his daughter, Rebecca, a graduate of East Rankin Academy in Pelahatchie. “We have been very pleased with how well it fits her (Rebecca’s) personality and specific needs,” he said. “MC has the perfect environment for my daughter.”

Mississippi College’s ability to help thousands of students build their faith today is one of its most important attributes to grads like Jean Ross. “I loved it and have an appreciation for MC as a Christian school.”