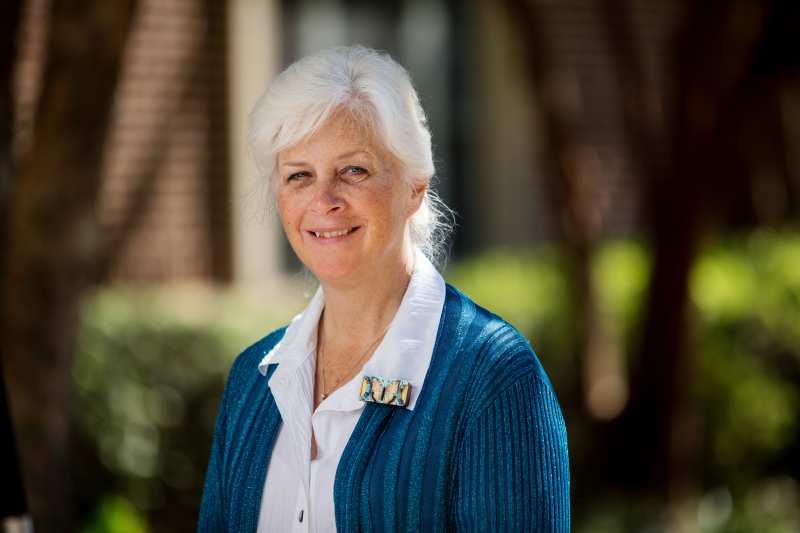 Kimberly Sharp, dean of the MC School of Nursing, said the school's pinning ceremony affirms the graduating nursing students’ hard work and dedication and celebrates the accomplishment of becoming a nurse.

Before beginning the accelerated Bachelor of Science in Nursing degree program at Mississippi College, the fourth-semester senior from Brandon served in the military, where she earned a pin for attaining a higher rank.

“The feeling of being pinned and recognized for years of hard work and dedication is unlike anything else,” said Ryan, who also served as a police officer before pursuing her degree in nursing.

When Ryan and her classmates receive their pin and a Blessing of the Hands during the school’s pinning ceremony on Thursday, Dec. 15, in Provine Chapel, it will mark the end of their academic requirements and the beginning of their professional careers.

“It represents one of the greatest accomplishments in my life so far,” she said. “I truly love helping people. Being a nurse will allow me to demonstrate Christian caring and provide love and care to those in need.

“Not only am I looking forward to being pinned myself, but I am so proud of my classmates. I cannot wait to stand next to them at both the pinning ceremony and graduation. Our hard work finally has paid off.”

Her classmate, Anna Carraway, has never attended a pinning ceremony, but is looking forward to the experience.

“The pinning ceremony is a celebration of all the accomplishments we achieved throughout nursing school and to be welcomed into the profession of nursing as new graduates,” said Carraway, a senior from Wesson. “I am looking forward to having my family there to support me and to celebrate with my classmates because we have finally finished nursing school.”

Carraway chose to pursue a career in nursing after observing her father, chief of a volunteer fire department, during medical first-responder calls.

“Nursing is a special career and something I am very passionate about,” she said. “As a nurse, you are required to have all the knowledge about a patient’s situation, their disease process, and what the patient is experiencing. You’re the one who comes face-to-face with the patient each day.

“You have to understand where the patient is coming from and also where the physicians and therapists and other members of the healthcare team are coming from. It’s a special career that you have to have a heart for, and the pinning ceremony helps provide encouragement for that.”

The ceremony has achieved such a significant place in nursing education that many students regard it as on par with Commencement, said Kimberly Sharp, dean of the MC School of Nursing.

“The pinning ceremony is the culmination of the MC School of Nursing journey when we recognize the achievements of our graduating seniors and send them off as ambassadors of MC,” Sharp said.

“They have shared memories with their colleagues that bind them as a group. The pin marks their journey, how they have become professionals, and that they are going to be working in that role.”

Tradition has it that the nurse pinning ceremony is tied to an award that was presented to Florence Nightingale, “the Lady with the Lamp,” a British nurse, social reformer, and statistician recognized as the founder of modern nursing. Nightingale was awarded the Red Cross of the St. George for her tireless work during the Crimean War.

To share the honor, she presented a medal of excellence to her brightest graduates, and shortly thereafter, the Nightingale School of Nursing at St. Thomas Hospital in London began awarding a badge with a Maltese Cross to all students who completed its program. By 1916, the pinning ceremony was a standard practice throughout the U.S. and England.

“Because each school of nursing designs and awards its own customized pins, these have become a unique, treasured item for graduates,” Sharp said.

In addition to the distinctive pin, each MC School of Nursing graduate will receive a second emblem firmly rooted in the Christian University’s tradition: a yellow rose. Roses were presented to members of the first graduating class in 1973, and it’s a tradition that has been championed by Susan Richardson, a member of that original class, ever since.

Cementing its special place among graduates, the pinning ceremony takes place separately from MC’s Winter Commencement so that School of Nursing seniors can share their academic achievements with their respective families and friends.

“Unlike graduation, the pinning ceremony supports the expectations that come with the students’ new nursing role,” Sharp said. “Once their academic requirements are completed, the students enter what anthropologists identify as a ‘liminal’ period of transition accompanied by events that mark the change from student to graduate. The colloquial description is a ‘rite de passage.’

“The pinning ceremony affirms the nursing students’ hard work and dedication and celebrates the accomplishment of becoming a nurse with family, friends, and faculty. It serves as a send-off and future affirmation of their work on the NCLEX licensure examinations that must be accomplished alone.”

The pin itself serves as a reminder to the graduates of where they’ve come from – and how far they can go in the profession.

“Our prayer is that they will be the hands and feet of Christ, sharing His light in the areas of professional practice that the Lord calls them to,” Sharp said. “They are entering a role where expectations are much higher, and the burden of responsibility and their obligations are much greater. We want to make sure they are prepared, and ensure their understanding that providing care is not just about technical skills, but their heart for nursing.

“As an MC-educated nurse, we value Christian caring. That is something that needs to be demonstrated to patients. I want that always to be central to what they do in their words, their actions, and even their facial expressions. Nursing students have been described as different, and it should be a positive difference that reflects the love and grace we have received from Christ Himself and how they demonstrate that love and care to their patients.”

Caraway will be relocating to Virginia to pursue a career in nursing with the Veterans Affairs Medical Centers. She said events like the pinning ceremony represent a significant milestone in her journey to become a professional.

“The nursing career is very difficult and requires special preparation,” she said. “The White Coat Ceremony signifies the beginning of the journey, while the pinning ceremony celebrates our accomplishments and our transition into caring for patients of our own.

“The pinning ceremony encourages us to apply the knowledge we have received in school to the rest of our careers. It’s one of the last times our class will all spend time together, and I’m excited to spend time with my classmates and celebrate all that we have achieved.”

Ryan, who has accepted a nursing position in the Surgical Intensive Care Unit at a hospital outside of Mississippi, said formal events like the pinning ceremony maintain a valuable place in her pursuit of a nursing degree.

“When I was in school for my previous degree, we did not have any special ceremonies,” she said. “The pinning ceremony is only a small fragment of what sets the School of Nursing apart from other degrees and disciplines. It defines us as a profession.”

A reception will precede the ceremony at 4 p.m. in Alumni Hall. Attendees will then cross Monroe Street and enter Provine Chapel, the setting of many nurse-pinning events of the past, for the official ceremony at 5:15.

I recognize that every person is created in the image of God;

That every person deserves respect as a unique individual;

and that every person has needs essential to his spiritual, physical, and intellectual well-being.

I recognize the expanding roles of the profession,

the significance of being a vital member of the health care team;

and the emergence of professional nursing as a discipline and a science.

Therefore, I commit myself before God and this assembly,

to the well-being of those I serve, whether in illness or in health;

to use my knowledge and skills with compassion and respect;

to uphold the standards of professional nursing practice with pride and diligence;

and to work with others in mutual cooperation for the