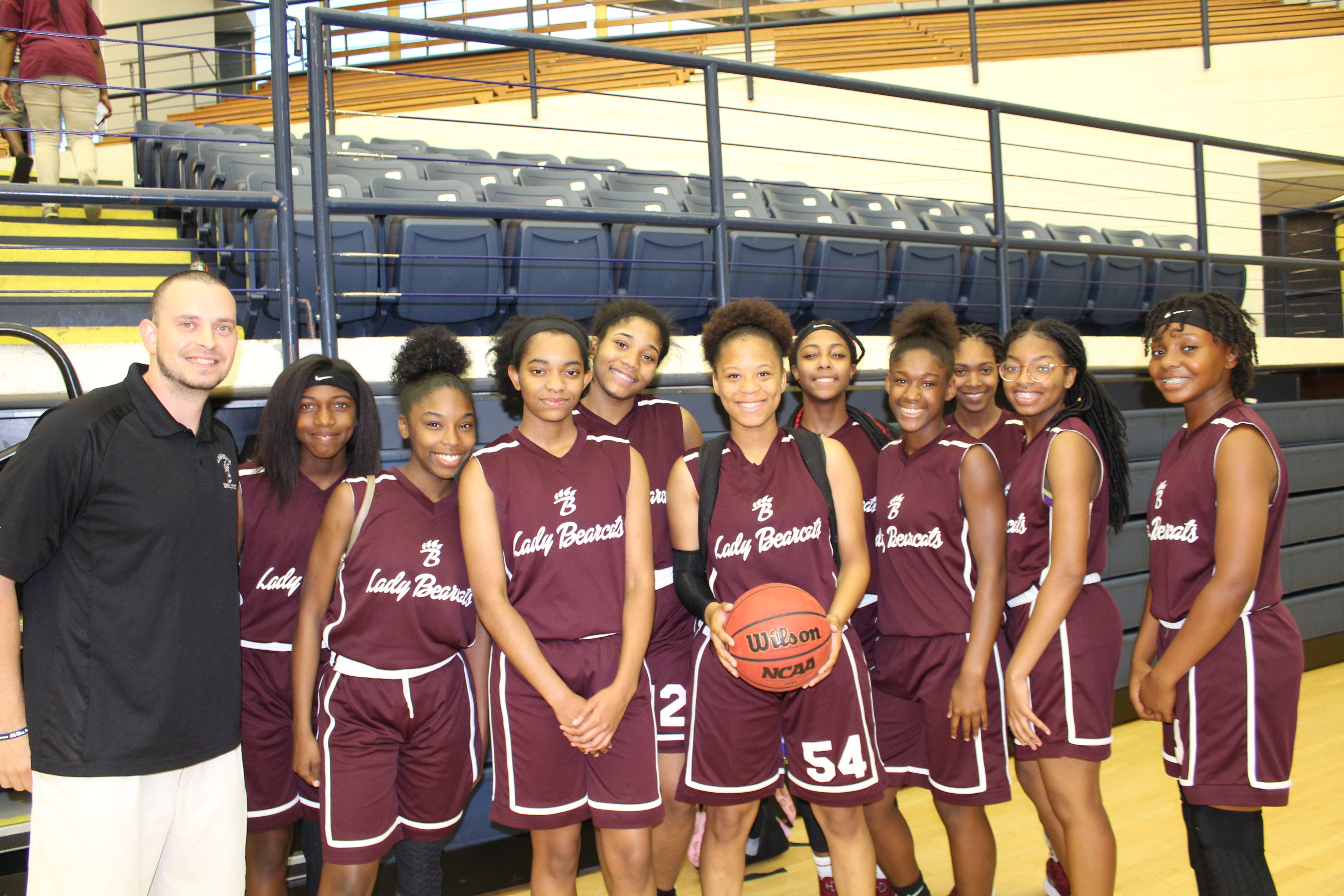 The Long Beach High Lady Bearcats stepped up their game at Mississippi College's girls hoops camp. Pictured are: Head Coach Jed Kanengiser and his Lady Bearcats players who traveled from the Gulf Coast to upgrade their skills on the hardwood at the MC campus June 7-9. Kanengiser is a former Pearl High basketball player.

The all-time leading scorer in MC Lady Choctaws basketball history, Lacey enjoys returning to her alma mater for the marathon of games every year.

The June 7-9 MC Lady Choctaws hoops camp offers the opportunity for the Lady Pirates to compete against terrific teams across the Magnolia State. The visit also allows Kennedy to reconnect with her friend, MC Lady Choctaws basketball coach Paul Duke.

Kennedy’s Pearl squad finished with an awesome 30-3 record last season. The Lady Pirates were one game away from reaching the state 6A championship game at the Mississippi Coliseum in Jackson.

“Lacey has done great at Pearl,” says Duke, who’s run MC girls basketball camps for over 30 years. “I’m amazed at what she’s done.” But then again, he remembers a premier hoops player at MC who constantly hustled for his teams. “Lacey outworked everybody. Her motor was always running.”

Known as Lacey Palomarez as a freshman on the MC Lady Choctaws squad, she met Jason Kennedy when he coached at Bogue Chitto High. They later got married and the rest is history. Jason serves as her assistant coach at Pearl High. Lacey, who’s served three years in the Army Reserves, demands excellence of her Lady Pirates in drills, games and in classrooms.

A star for the Lady Choctaws in the American Southwest Conference about a decade ago, Coach Kennedy traveled with three Pearl teams to the Clinton campus.

There were 40 games played Thursday, 55 more on Friday and at least 20 contests in Clinton on Saturday.

“It’s been a good experience. The facilities are nice and the quality of the officials is really good,” said Long Beach High Lady Bearcats head coach Jed Kanengiser. “It’s a nice mix of campers from all over.”

Her daughters, Amiya Moore, 18, and Marlana Moore, 13, attended MC’s summer camp to advance their skills on offense, and defense. The Mississippi Gulf Coast delegation found time for fun, too. They made plans to see the Mississippi Braves play at Trustmark Park. The MBraves baseball game Friday night with the Pensacola Blue Wahoos in Pearl was followed by a fireworks show.

Watching the Long Beach team compete at the A.E. Wood Coliseum with its huge new video scoreboard was a neat experience for parent Jerome Lacking. His daughter, Sanaa, plays on the Lady Bearcats varsity. The camp, said the nursing home administrator, helps the players to develop their skills. “It’s not about winning,” added the Mississippi College graduate. “It’s about getting better.”

Returning to the MC Choctaws team camp each year remains a must for Brookhaven Academy girls basketball coach Jason Case. The former Delta State hoops player has visited the Clinton campus many times before.

His sons, Jay and Jared Case played on the MC Choctaws men’s basketball team a couple of years ago under Coach Don Lofton. Jason Case also serves as the head of schools at Brookhaven Academy. Jay Case is a new assistant basketball coach at Clinton High after a stint at Richland High. His brother, Jared Case, works at a Mississippi bank.

Twenty-four teams participated in the 2018 edition of MC girls basketball camp. Duke expects many of the same players will be back on the Clinton campus for more hoops again next June.