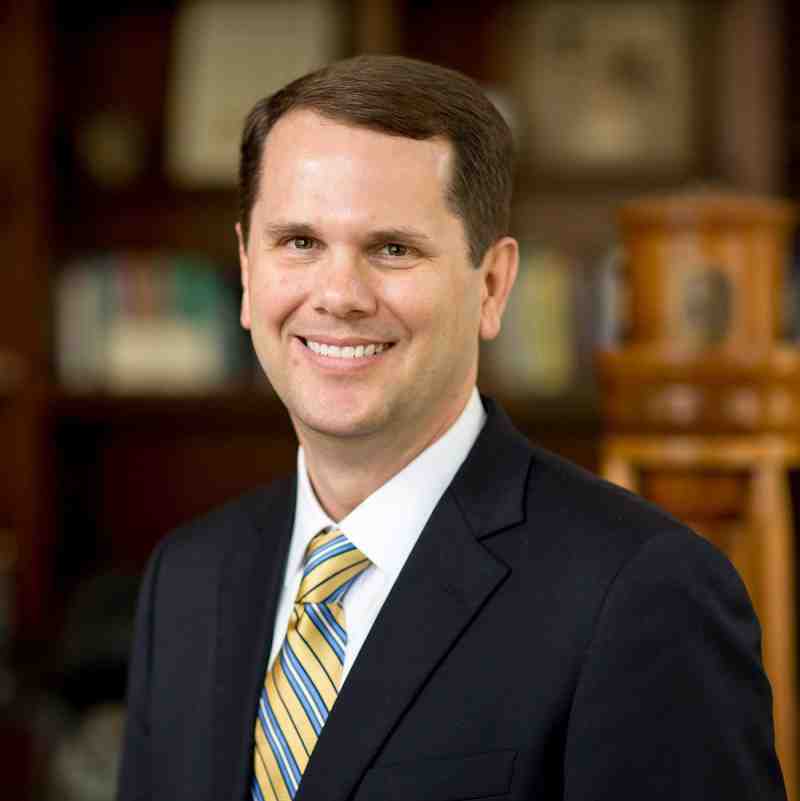 Messages of congratulations and best wishes for continued success for President Blake Thompson are pouring in from across the nation. The timing is as Mississippi College supporters celebrate his inauguration in late March.

Messages arrived from Tulane University in New Orleans and stretched to Pepperdine University in California. The greetings came as well from Texas Wesleyan University in Fort Worth to the University of West Florida in Pensacola. The display near Dr. Thompson’s office is part of Inauguration Week to honor MC’s 20thpresident.

Texas Wesleyan University President Fred Slabach and President Thompson are longtime friends. An MC graduate, Slabach became the first visitor to stop by for an office visit on Thompson’s initial day on the job in July 2018.

“Blake Thompson is a visionary leader who is committed to academic excellence,” Slabach said in a statement Wednesday. “He has unbounded energy, and keen insight into both the great potential and challenges that face small private religiously-affiliated colleges and universities. Mississippi College is fortunate to have Blake’s leadership and experience.”

Other leaders welcoming Dr. Thompson include Tougaloo College President Beverly Hogan. She points to a strong partnership between the two metro Jackson schools with Tougaloo grads regularly enrolling at MC Law School. Students on both campuses convene each year to present research projects.

A Mississippi native, Hogan became Tougaloo’s first woman to serve as president at the historically black institution in May 2002.  Retiring June 30, she’s visited with Dr. Thompson at meetings and was impressed. “I know he will do a great job there,” Hogan said by phone Wednesday.

Delta State University President William LaForge also praises his friend, Blake Thompson. “He is a man of great ability and integrity. I know he will lead Mississippi College with class and distinction.” LaForge said. “I wish him every success in the years ahead.”

Rivals in the Gulf South Conference, Mississippi College in Clinton and Delta State in Cleveland sit two hours apart. But the two presidents don’t let sports rivalries impact their friendship. Thompson and LaForge worked together in Washington years ago when they served on the staff of recently retired U.S. Sen. Thad Cochran. “Blake enjoyed a terrific career stop on the staff of Senator Thad Cochran.”

Other prominent leaders including former University of Mississippi Chancellor Dan Jones will play a major role during MC’s inauguration activities.

An administrator at the University of Mississippi Medical Center in Jackson, Dr. Jones will be the keynote speaker at Thursday’s academic symposium. The topic is Christian higher education. Open to the public, the 3 p.m. program is set for Swor Auditorium in Nelson Hall. An MC graduate, Dr. Jones is a former trustee at the Baptist-affiliated university.

Students and educators will follow his talk with a panel discussion. Serving are Amber Kaminski, an MC senior marketing major and Christian Wear, a senior communication major. Kaminski is the Choctaws cheerleading captain and vice president of the Kissimee Social Tribe. Planning a career in ministry, Wear is a debate team member.

Professors Angela Mae Kupenda of MC Law and David Magers of the Chemistry Department are also on the panel. Professors John Meadors of the Christian Studies Department and Stephanie Henderson of the School of Education round out the group. Dr. Thompson will speak to wrap up the March 28 event.

The 4 p.m. Friday inauguration ceremony on the Quad will include speakers such as Mississippi State University President Mark Keenum, and the Hon. Regina Schofield, an MC graduate and Washington-based administrator for Battelle, a research giant. David Williams, dean of the College of Engineering at The Ohio State University, is the third speaker. Dr. Thompson worked as a vice president at Ohio State for nine years before serving as Mississippi College president.