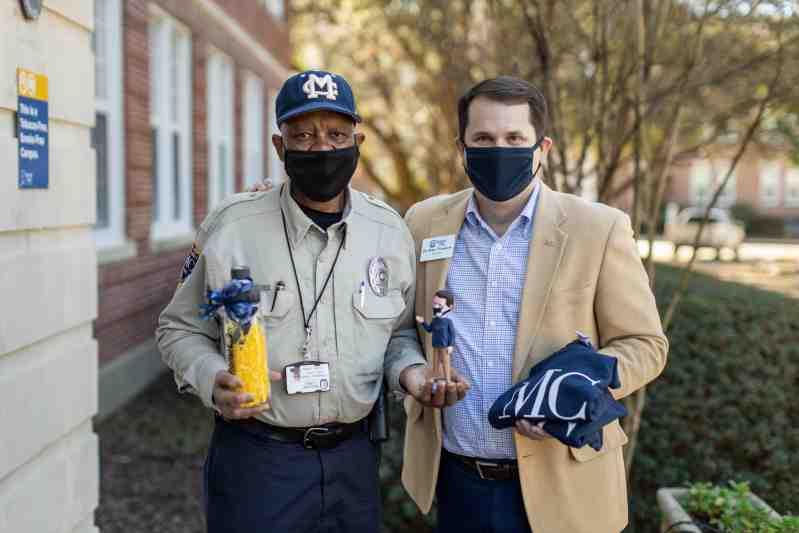 Trying to tally all the friends that Officer Gregory Travis made for years at Mississippi College is an incredibly difficult assignment. There are so many fitting that description.

His hard work in law enforcement circles is well-documented. The friendly MC public safety officer goes out of his way to keep the Clinton campus safe. He seems to know every professor, staff member, and student on a first-name basis. There’s often a big smile on Gregory’s face as he goes about his business.

President Blake Thompson can’t say enough good things about Officer Travis. His dedicated service to MC is being showcased in March, with Travis named the first recipient of Dr. Thompson’s MVP staff award to honor this splendid university employee. It comes with a President Thompson bobblehead, a month’s reserved parking spot on campus, and a gift card to the university bookstore.

“I can’t think of a better person to be selected as the first recipient of the MVP staff award,” Dr. Thompson said.

Working multiple jobs with excellence as an arson investigator, polygraph examiner, and lawn care leader at his church, he’s equally passionate about his job serving the MC community.

The 63-year-old Central Mississippi native and north Jackson resident is starting his 6th year at MC. He retired as a chief investigator with the Jackson Police Department’s Arson and Internal Affairs Division in 2015. He also worked in public relations in JPD. He loves the family atmosphere at MC. How does he know everybody? “I have a good memory.”

During the COVID-19 pandemic, his work really shined. Travis labored long hours to greet every MC student as they entered the A.E. Wood Coliseum for coronavirus testing last August. When flat tires need fixing, he’s usually on the scene. Travis isn’t afraid to do the dirty work as he joins colleagues washing public safety office vehicles.

MC Public Safety Director Mike Warren is part of a large contingent raving about this upbeat member of the Blue & Gold family.

“He always has a positive attitude and is willing to do anything that needs to be done,” says Warren, a retired Clinton police chief.

“We have to keep an eye on him because he will tire himself out trying to greet everybody personally and offer his help,” Warren said.

It was during a Mississippi College commencement at the A.E. Wood Coliseum several years ago that he was given the nickname “The Mayor.”

At the time, one of MC’s part-time officers, a retired Mississippi Highway Patrol trooper, noticed Travis talking to just about everybody in the basketball arena. The officer commented that Greg must be running for mayor, Warren recalled. “The nickname kind of took hold in our department and now across the campus. I hear students commonly refer to him as the mayor.”

A Callaway High graduate and former Hinds Community College student, Gregory Travis makes his faith a huge part of his life. He shows a positive Christian influence on anyone he comes in contact with, Warren said. “We are very fortunate to have him on campus.”

Brent Perkins, assistant director of the Department of Public Safety, is thrilled to see Travis chosen for the MVP award. “He continuously goes above and beyond, one hundred times over, on a daily basis.”

Travis, he said, is a “most humble person who always puts others first. He always does what’s best for the college without ever saying a negative word.”

With Greg, Perkins said, “what you see if what you get and that is a very good thing.” As he works numerous jobs, the award-winning officer at the Baptist-affiliated university “always puts God before everything.”

Campus security officer Jessica Janotta is just as excited to see her colleague receive the recognition he truly deserves. “Greg Travis is always the kindest most heartfelt person,” she said. “He is always working hard until the last minute he is on the clock.”

Additional Mississippi College staff members will be recognized each month with MVP awards. For those not familiar with the three letters, most notably used in the sports world, it stands for Most Valuable Player. And that’s how tons of people would describe his outstanding work year-round at Mississippi College.