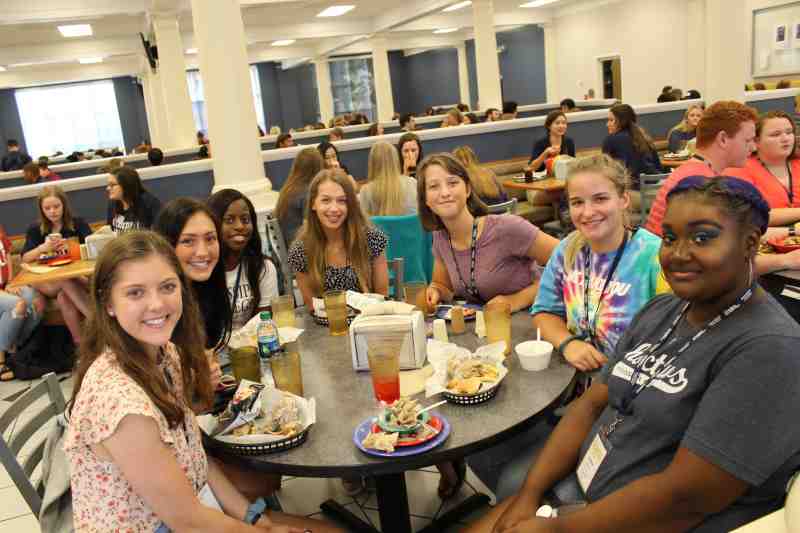 These members of the Class of 2023 enjoyed their first lunch at the Mississippi College cafeteria during summer orientation. The 2nd orientation is June 10-11.

Mississippi College graduates Chris Thurman and his wife, Kim, need no introduction to the Clinton campus. A 1993 MC graduate, Chris played on the Choctaws hoops team, while Kim starred on the Lady Choctaws squad at the A.E. Wood Coliseum.

Now their son, Tanner, 18, is the latest to join the Thurman family tradition at the Christian university. The Brookhaven Academy graduate seeks a spot on the MC basketball roster under coach Mike Jones.

A shooting guard and point guard, Tanner Thurman was among 140 freshmen visiting Mississippi College for the summer’s second orientation June 10-11. President Blake Thompson teamed with student leaders and staff to welcome all visitors, including parents.

“It was mostly his decision, although he’s obviously real familiar with the school,” Chris Thurman said after lunch Monday in the MC cafeteria. “The School of Business was very attractive to him. That was a big factor in his decision.”

A member of the MC Sports Hall of Fame, Kim Thurman notes her alma mater sits close to home in Brookhaven. The Lincoln County community is located 90 minutes from Clinton. That was another selling point for their son, a future business major.

MC begins its 194th academic year in late August. It marks the 2nd season for Dr. Thompson, who began leading the Baptist-affiliated university on July 1, 2018.

Freshman Mattie Floyd of Brookhaven, wanted to attend Mississippi College because of its Christian environment. The close-knit college atmosphere, said the West Lincoln High graduate, enables her to build a closer relationship with professors. The biochemistry major seeks to go to medical school. MC offers outstanding programs to make that happen, Mattie says.

“I liked the vibe and the energy,” said freshman Takaye Farmer of Memphis. “Everybody at MC is really welcoming.”

Sports attracted Trellis Williams, 18, of Byram. Trellis played basketball for the “Victors,” a squad of home-schooled players from metro Jackson communities. Now he hopes to win a spot on the Blue & Gold’s hoops roster.

Playing football at Starkville High opened doors for Keith “KJ” Lawrence to join the Choctaws team in the Gulf South Conference. Their 2019 season opens with a September 7 road game against the Alcorn State Braves. The freshman will hit the books as a kinesiology major.

Most students attending orientation came from Mississippi and other Southeastern states. One family selected MC after recently relocating thousands of miles to the USA. Two weeks ago, Jerry Brown retired from the U.S. Navy in Japan and moved to Pensacola, Florida. A Florida pastor encouraged the Brown family’s daughter to consider MC and she enrolls this Fall. The Brown family leaves behind landmarks including the city of Tokyo, the Imperial Palace, and Mount Fuji in the East Asian nation. A large U.S. Navy base is located in Okinawa.

Math professor John Travis is delighted his youngest daughter, Laura Joy, 18, will soon join the Class of 2023 at his alma mater. A 2019 Clinton High graduate, Laura Joy will be a math major when classes start in late August. John and Ruth Travis are the parents of two other daughters with MC diplomas.