Retiree Makes His Mark With Music 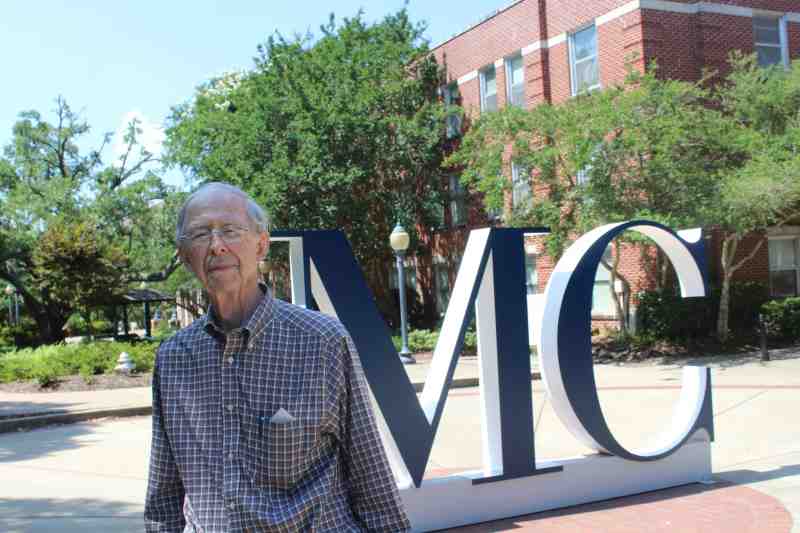 Whether the piano is at Mississippi College, Hinds Community College or metro Jackson churches, Carroll is a master at his craft. He began the service in the mid-1970s.

At age 90, the retired MC Choctaw Marching Band director is still at it. Call it a post-retirement hobby. He charges $100 to tune a piano, a difficult task that typically takes him up to two hours.

The average price around the USA to tune pianos varies, often between $65 and $225, reports say. It’s a skill best left in the hands of professional tuners, experts say.

“It’s a hard thing to learn,” says Carroll during a June 3 visit to the Clinton campus.

The time and effort to tune the complex musical instrument with 88 keys can vary, as well. “It depends on the condition.”

Retiring from MC as a music professor in 1994, Ralph Carroll tuned practice pianos at the university’s Aven Fine Arts Building for decades.

Pianos on the Clinton campus receive extensive use year-round. That includes when the MC Music Department hosts five-day summer camps for dozens of students in grades 7-12.

Retired music professor Jimmy Sclater says his former colleague does terrific work. “There’s no telling how many pianos he’s tuned over the years.” And he’s a wonderful Mississippian, too. “Ralph Carroll is one of the nicest, kindest men you’ll ever meet,” says the award-winning Clinton composer. “He has been a friend to music his whole career.”

Music Department Chair Angie Willoughby also sings his praises. “Ralph Carroll has touched the lives of hundreds of music students over the years,” she said. “As a teacher and technician, he has been a devoted servant to MC.”

A former music minister at a Jackson church, Ralph worked on pianos vital to the life of numerous congregations in the region.

There are tuning kits to purchase to help with the piano tuning process. Books like “The Craft of Piano Tuning,” by Daniel Levitan tell readers a great deal.

There are several people in the business in Central Mississippi such as Mixon Piano Tuning Repair in Clinton. Among others: D.R. Boyer Piano Service is located in Jackson. Piano Tuning by Martin Bittick operates in Brandon. A to C Piano Tuning & Repair is listed in Madison.

One of the highlights of his tenure was when the MC band embarked on a road trip to Mexico City in the 1960s. The band performed as the Choctaws football team battled the Pumas of the University of Mexico. The gridiron series began in 1929. This marked the first time the MC band traveled with the team to Mexico.

The game was played at a 100,000-seat stadium before a huge crowd across the USA border. Hartwell McPhail coached Mississippi College to a 40-6 road triumph over the Mexican team in 1964. There were more fans watching in Mexico than the 40,000-plus on hand at a similar contest at Mississippi Veterans Memorial Stadium in Jackson in 1962. There were many delightful memories for Ralph Carroll, who retired after teaching music 33 years.

A 1958 University of Oregon graduate, Carroll enjoys being part of the MC family, including working with presidents starting with Richard Aubrey McLemore. Mississippi College is now led by the university’s 20th president, Blake Thompson.

During trips to the Clinton campus Ralph Carroll remains in tune with the 193-year-old Christian university. He’s not just a devoted Mississippi College supporter. He and his wife, Sadie, a retired bank secretary, are fond of living in MC’s hometown of Clinton.