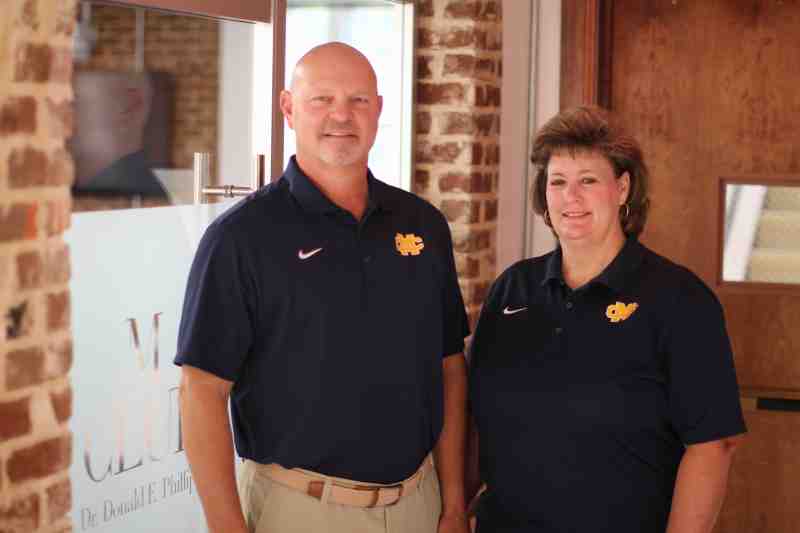 Two of Mississippi College’s most decorated student-athletes are helping breathe new life into an organization that helps former Choctaws stay connected to the University.

Kenny Bizot, MC athletic director, who captured the Mr. Hustle Award during each of the four seasons he played basketball for legendary coach Mike Jones, and Susan Musselwhite, MC associate athletic director for compliance, who was a four-time All Gulf South Conference selection for the Choctaws softball team, are working to revitalize the University’s storied M Club.

The club provides opportunities for those who wore the Blue and Gold to give back to the institution they represented so well.

Membership in the M Club has waned during the last few years. The pair of Mississippi College Athletics Hall of Famers is working with an advisory committee of former MC student-athletes to develop strategies to see the organization return to its former glory. The committee consists of representatives from a wide array of Choctaws men and women’s athletic programs who are interested in the club’s success.

“We are interested in developing ways to show appreciation to the former athletes and the time they served in each of their sports at MC,” said Bizot, who was named an all-conference defensive player and made the All Gulf South Conference Academic Team during his tenure on the A.E. Wood Coliseum court. “We look at this as an opportunity to reach out to our alumni and draw them back to our college and our campus.

“Any former athlete or support personnel who has taken part in any of our sports has an opportunity to become an active member of the M Club.”

“We hope to see a lot of those decals on cars around town,” Bizot said. “We’re trying to create a level of support among our former players that our current athletes can be proud of. If you’re an athlete and you see these logos and you see a lot of people coming to your event, it provides a lot of motivation.

“It becomes a huge part of the culture of support we’re looking to create here.”

“It’s another way for our alumni to remain engaged with the University,” said Musselwhite, the softball team’s MVP for 1993-94. “Following our programs on social media, becoming involved in what’s going on with our athletic teams, shows tremendous support for our athletes, and they appreciate that.”

Every fall, the M Club hosts a reception during MC’s Homecoming to help members connect with one another prior to the big football game. Each spring, the Student Athlete Advisory Committee (SAAC) hosts a “Choctaw Sports Night” that provides an opportunity for M Club members to grow the organization by educating more than 400 MC athletes, particularly juniors and seniors who will be graduating soon, and cultivating a better understanding of what the club is all about.

About three months ago, the M Club launched its email newsletter, which touts the accomplishments of current and former members of the Blue and Gold, keeps readers abreast of where each of MC’s 18 athletic teams are in their respective standings, and lists important upcoming contests that should be circled in red on MC sports fans’ calendars.

While the M Club has maintained its place as an essential support organization for Choctaw athletic programs, Bizot and Musselwhite would like to see it thrive in the role. There could be no better advocates to help stimulate growth in the loyalty club.

After graduating from MC in 1994, Bizot served as a graduate assistant coach while earning his graduate degree in communication at MC. He spent four years as an assistant basketball coach and recruiting coordinator under Don Lofton, helping lead MC to a No. 2 ranking nationally. His recruiting classes posted a five-year record of 119-35 and made three consecutive Sweet 16 appearances. For his achievements on and off the basketball court, Bizot was honored by the MC Department of Communication with its 2011 Alumnus of the Year Award. He succeeded Jones as MC AD in 2021.

During her playing career, Musselwhite set MC Softball batting records for most hits, highest career average, most doubles, most home runs, and most RBIs, and pitching records for best earned run average, most strikeouts, and most shutouts. She started, pitched, and won more games than any player in Choctaws history, and earned her bachelor of education in 1994 and her master’s of education in 1996. She served as head coach of the softball team for 11 seasons, collecting a school-record 203 victories and winning more than 20 games seven times. Musselwhite captured ASC East Coach of the Year honors for 2005-06 and received the Van “Doc” Quick Distinguished Staff Award from MC in 2015. She was named assistant AD at MC in 2006 and was promoted to associate AD for compliance in 2017.

Although the M Club will remain exclusively for Choctaws, the duo contends the organization is not exclusive. Any former athlete, support staff, or individual who has represented the University can become a member. This includes former student-athletes, coaches, cheerleaders, dance team members, athletic trainers, and managers, among others.

“It’s like a fraternity and sorority of former athletes,” Bizot said. “Our approach is, we want it to be something they want to become members of to show their Blue and Gold support, to give recognition to the University and to be proud of their time here.

“The ultimate goal is to show support for the MC athletic department.”

Active dues-paying members get an additional important benefit – the opportunity to vote for each MC Athletics Hall of Fame class. Having a voice in who joins the elite list of Blue and Gold legends is fitting, considering M Club dues directly support MC Athletics and the Hall of Fame.

Musselwhite said the club’s most recent marketing efforts, including the newsletter, have been received well by former athletes. What remains to be seen is whether those efforts will bear fruit in the form of increased support from a growing M Club membership.

“Our current efforts are more about awareness, but they are drawing recognition by giving our former athletes some notoriety,” she said. “We want them to know that they have made a difference here, and we want to carry on their legacy and their tradition.”

Bizot said the M Club provides an opportunity for its members to share what they learned while contributing to that legacy of athletic success.

“Athletics allows you to understand how to exist in a different culture with different people who have different ideas, all of which come together to support a common goal,” he said. “When you get in the job force, how you connect with people, your work ethic, and how adjustable you are to certain situations becomes important. Athletics teaches you to work hard and strive to do the best you can each and every day.

“My hope is that we can reach former athletes through the M Club, and let them know how much they’re appreciated, and how thankful we are for the time they spent here at MC.”

To subscribe to the M Club Newsletter, email mclub@mc.edu. For more information or to join the M Club, click here.