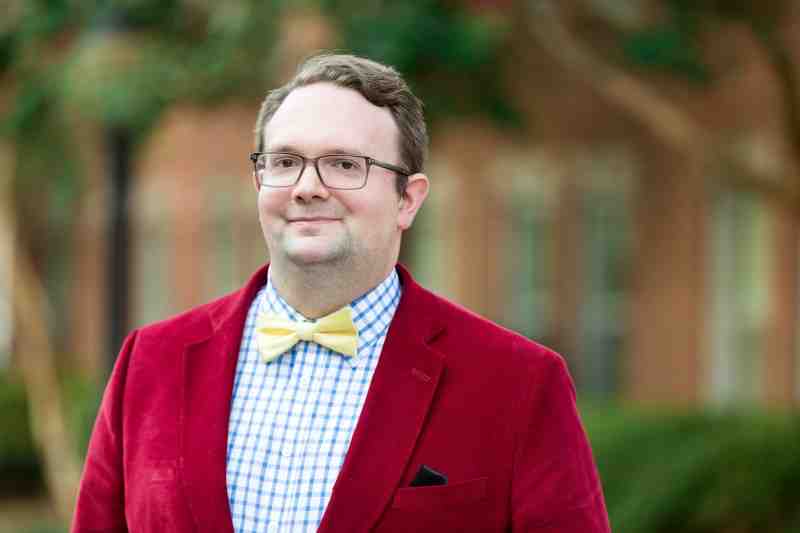 Robert Burgess is the serials and electronic resources librarian at Mississippi College.

Robert Burgess played the clarinet with vigor as a student in the University of Alabama’s Million Dollar Band. It’s been a Crimson Tide tradition for 106 years performing in front of millions of fans.

Still pretty sharp performing on the clarinet, Robert enjoys playing music pieces from the movies. The Clinton resident is playing a different tune this summer as a new librarian at Mississippi College.

The University of Alabama graduate is thrilled to join the faculty at America’s second oldest Baptist college. “I feel honored to work at a school that prepares men and women in so many professional fields, but is strongly rooted in the Christian faith.”

The serials and electronic resources librarian on the Clinton campus, he’s passionate about his profession.

“The thing that I love about libraries is helping people get the information that they need to be successful,” he said. During his first month on the job, the librarian helped students seeking information in nursing journals, among others. It’s really just a case of “answering all kinds of questions.”

Each day at the Leland Speed Library, Robert goes the extra mile to tap into new technology and services to enable students to excel in their studies.

It was at the University of Alabama’s Tuscaloosa campus where he felt the Lord leading him to be a librarian, rather than career plans as a teacher. He struck up a friendship with a UA librarian, then received plenty of encouragement from faculty and staff to pursue the field.

Robert Burgess, 32, earned his bachelor’s degree in history and social science, secondary education at Alabama and a master’s of library and information science at UA. He received a master’s in theological studies at Southwestern Baptist Theological Seminary in Fort Worth. Burgess finished coursework for a doctor of educational ministries degree at the Texas school this summer. At the moment, he’s busy working on his dissertation.

He’s got diverse interests in the library world. During his career, Robert handled presentations at multiple conferences on social media, student outreach, digital archives and children’s literature. He’s written for professional publications on topics including student outreach through library events.

The Hoover, Alabama native stays on fire for Crimson Tide football. As Mississippi College begins its 195th year, the new faculty member is learning to become a loyal fan of all things Blue & Gold.