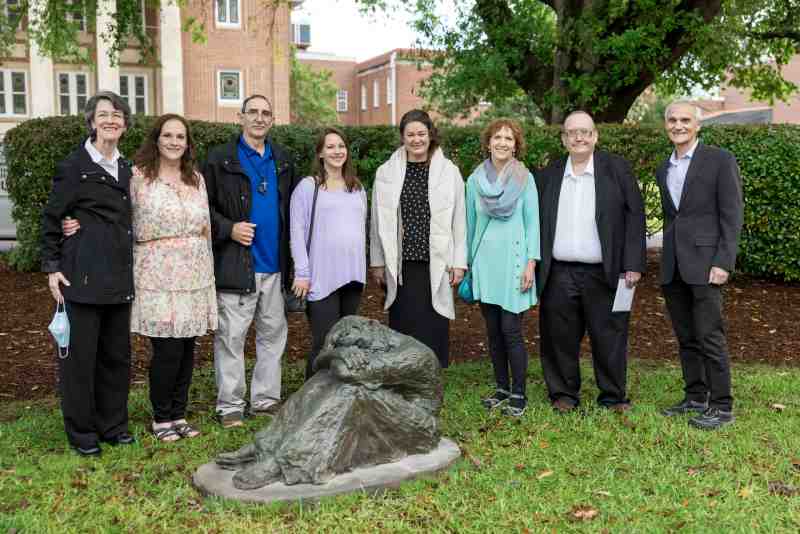 Sam Gore’s former Mississippi College students worked as a creative team to add the finishing touches to complete his Christ in Gethsemane sculpture.

In a splendid April 15 ceremony with Christian music at the Rhoda Royce Prayer Garden, three disciples were unveiled as part of the final work of the late internationally celebrated artist.

Sam Gore began work with his gifted hands on two of the disciples and started crafting a third before passing away in April 2019. He proved to be a phenomenal painter, sculptor, and teacher before he died at age 91. Dr. Gore attended the unveiling of the Christ in Gethsemane sculpture a month before his death.

Family, friends, and a sea of admirers gathered at the April 2021 dedication that began under overcast skies on the Clinton campus. By the ceremony’s end, the sunshine appeared. Guests loved sharing stories of the impactful artist and Founding Father of the MC Art Department in the late 1950s.

In the Garden of Gethsemane, Jesus asked His disciples to wait and keep watch as he prayed a short distance away. Jesus was praying to God the Father.

At the Thursday morning ceremony near Alumni Hall, President Blake Thompson joined Sam Gore's family members, Art Department faculty, and other longtime admirers of the illustrious artist from Clinton. Dr. Thompson says he thanks God “for the life Dr. Gore gave us.”

Due in part to Dr. Gore’s sculptures, “the spirit of the Lord moves on this campus,” said Art Department Chair Randy Miley.

The 1952 Mississippi College graduate was determined to complete the Christ in Gethsemane sculpture.

“Dad really wanted it finished,” his daughter Dr. Judy Gearhart said. An artist and retired physician, the Mississippian noted it was fitting that his former students combined their talents to pitch in. As an MC professor, Dr. Sam Gore was all about students and helping them achieve their dreams.

There are three sleeping disciples, with two on one foundation. One of the disciples is asleep (James), and another is trying to prop up his head to stay awake (Peter). A separate disciple is sitting up with his head on his arms and knees (John).

Art instructor D.P. Smith said it was a pleasure to assist with the project. His final work, she said, “is about his love for the Lord and his Lord’s mission.” She recalled how Dr. Gore shaped her life for years and did the same for many other former students. "He had so invested in the lives of his students.”

Carrie Reeves, a sculptor who teaches online art classes at the Baptist-affiliated university, was delighted to join the team effort.

“It was a privilege working on the face of the sculpture because that’s one area Dr. Gore really put himself and a lot of expression into with his sculptures and that he taught me about,” Reeves said.

The MC alumna was among several people working on the face. “It was a collaboration just like all the other parts,” she said. “It was a big honor to see the finished project.”

It took Sam Gore nearly a year to develop the 450-pound “Christ in Gethsemane.”  The work in the prayer garden is a short walk to Provine Chapel. It is located near his sculpture of Jesus washing the disciples’ feet.