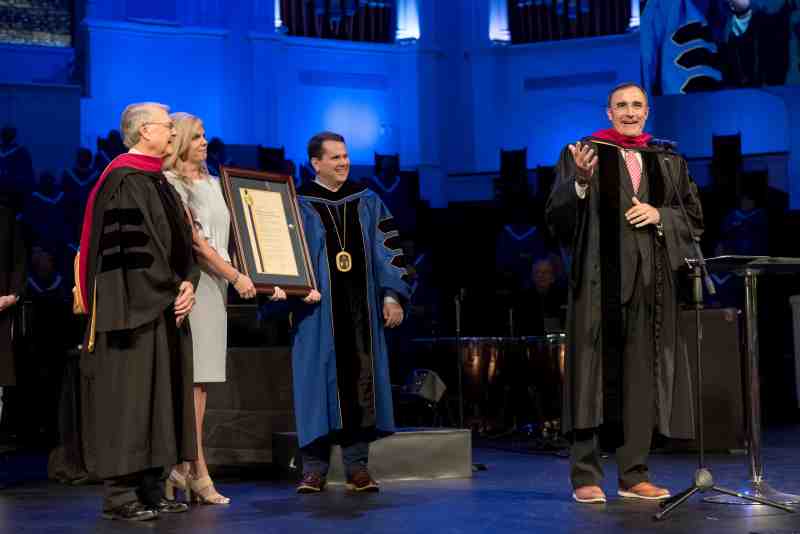 Mississippi Baptists know the Rev. Walter N. “Chip” Stevens for his lifelong service to Christ and commitment to churches. He’s dedicated to serving the Lord as the senior pastor at First Baptist Church Jackson.

A scholar and Baptist leader with a heart for mission causes, Stevens recently received the honorary Doctor of Divinity degree from Mississippi College. The honor for the beloved Mississippian came in a special April 11 ceremony at FBC Jackson.

Dr. Thompson commended Chip Stevens for a “lifetime of dedicated service” to God, Baptist churches, Christian higher education, and his community. An accomplished leader in the Blue & Gold community, Stevens has served a dozen years on the MC Board of Trustees.

A 1994 MC business administration graduate, Chip played varsity tennis for the Choctaws. He comes from a long line of MC graduates in his family. In 1996, Stevens was named the Christian university’s Young Alumnus of the Year during Homecoming activities on the Clinton campus.

“I’m so grateful to Dr. Thompson and Mississippi College,” Stevens said at the pulpit as Sunday services neared a close. “It means the world to me.”

Chip’s wife, Sandra, and Dr. Frank Gunn, an MC trustee and retired senior pastor at First Baptist Church Biloxi, joined him at the robing ceremony that Sunday in the capital city. Chip worked with Dr. Gunn on staff at FBC Biloxi and rose up the ranks, first as a minister to students, then as associate pastor, before succeeding him in 2001. Dr. Gunn served as Chip’s lifelong mentor.

During his six years leading the church on the Mississippi Gulf Coast through 2006, attendance numbers climbed to their highest levels. Chip was equally successful as the senior pastor at FBC Starkville and stayed involved in the life of Mississippi State University’s hometown. He served at the Starkville church from 2006 through 2019. He was active in Mississippi State University’s hometown as a chaplain to the Starkville Police Department. Chip coached youth baseball and basketball teams, too.

Stevens became the 23rd senior pastor at FBC Jackson on March 3, 2019, and his leadership continues to receive widespread acclaim. He first joined the MC Board of Trustees in 2007.

As the recipient of an honorary doctorate, it is a distinction that speaks volumes about Dr. Stevens' commitment to his alma mater as well as Baptist churches, the Mississippi Baptist Convention, and the Southern Baptist Convention. At Dr. Gunn’s suggestion, the MC Board of Trustees Academic Affairs Committee voted to award Stevens the honor.

The Alabama native received a master of arts in Christian education at the New Orleans Baptist Theological Seminary in 1996. He began his career as a part-time youth minister at First Baptist Church, Crystal Springs, in 1993. He moved to FBC Biloxi three years later as a minister to students.

Away from church activities, Chip and his wife, Sandra, are the parents of three children: Reid, Emory, and Graham.

At the April ceremony, Dr. Gunn said he sees Chip Stevens as a leader who loves people and his church. “I know Chip’s heart is people” and seeking them to follow Jesus.