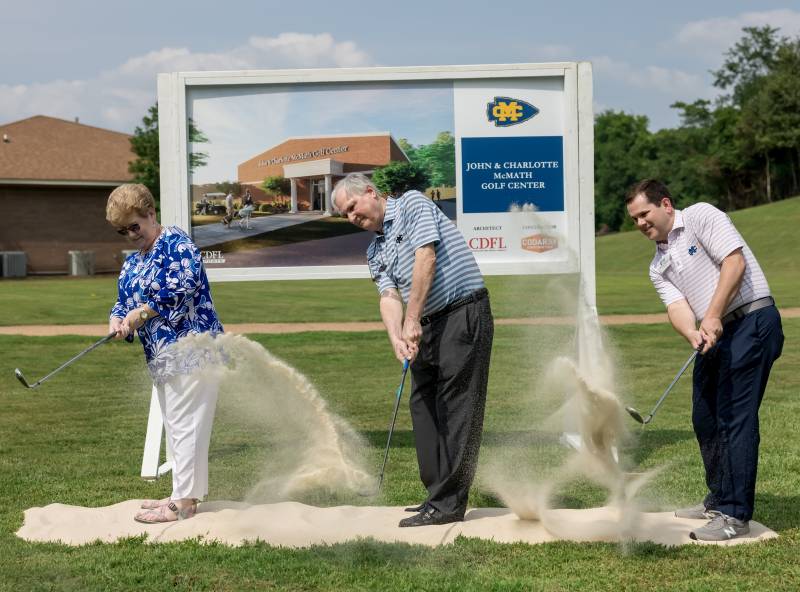 MC President Blake Thompson, right, joins John and Charlotte McMath in a ceremonial bunker shot to 'break sand' for the state-of-the-art golf practice facility that will bear the couple's name.

Ground has been broken at Mississippi College for a high-tech practice facility that could become the envy of every golf program in the Gulf South Conference.

Kenny Bizot, MC athletic director, said the center, scheduled to open by spring 2024, will be one of the finest practice facilities in Division II golf.

“The McMath Golf Center will provide our men and women student-athletes a home on our Clinton campus,” Bizot said. “They will have a place to meet, work on their golf games, and have study hall without having to leave campus.

“The facility will provide our players with first-rate technology, which will help with their overall performance in their sport.”

Mike Jones, former athletic director and namesake of an annual golf tournament each spring that benefits MC Athletics, said the Trackman’s advanced technology will help each golfer stay attuned to their games.

“The technology will allow the golfers to check their swing speed, launch angles, and other measurements golfers use to perfect their game,” Jones said. “Team members will be able to practice year-round in that facility. Cold or rain won’t be a factor – they’ll be able to work on their game anytime.”

Located adjacent to the Girling Field House on West Madison Street in Clinton, the center is fittingly named for two of the most generous patrons of MC’s golf teams. John McMath helped revive a dormant golf program at MC. He served as head coach for 15 years, and simultaneously served as a professor of mathematics. He was awarded emeritus faculty status at MC. Charlotte McMath, a longtime professor of math at the Christian University who also obtained emeritus status, has been a bastion of support for the golf teams.

“We want this facility to be the best in Division II,” John McMath said. “We want the men’s and women’s golf programs to grow and be competitive every time they step on a course.”

Ethan Doan, head coach of the MC men’s golf team, said the facility will provide MC linksters a leg up on their Division II competition.

“It will benefit our men’s and women’s golf teams,” Doan said. “It will be a great tool for attracting student-athletes to our programs, and will increase the number of prospective golfers who want to continue improving their game and compete in the Gulf South Conference.”

Hannah Hinckley, who led the MC women’s golf team to a second-place finish in the Rhodes Classic by placing second out of 42 golfers in the October tournament, said she can’t wait to start using the facility.

“The women’s team practices in Brandon, about 35-40 minutes away,” said Hinckley, a freshman biology-premed major from McComb. “We are very limited on time, because we are all involved in campus activities, too.

“The new facility will be great for the team, especially when we are between classes, in a time crunch, or during the off-season when the weather isn’t that great.”

She described the pair of hitting bays, which serve as indoor driving ranges, akin to batting cages in baseball. She anticipates the indoor putting green will be similarly beneficial.

“My short game gets rusty without practice,” she said. “If I don’t work on that, it can develop into bigger problems, so it will be great having access to a putting green.

“The facility will be special, and the team appreciates having a practice facility on campus. We appreciate everyone who has helped sponsor this facility.”

According to Katrina Pace, executive director of the MC Foundation, funding for the center came entirely from donors. The McMaths provided a lead gift to establish the facility, while many of their former students, former members of the MC golf teams, and friends – including David and Wendy Garner, Terrell and Sandra Winstead, Tony Stringer, Taylor Stringer, and Dr. Steve and Julie Mills – contributed substantial support. Dr. Robert and Rebecca Watson gave a cornerstone gift that completed the necessary funding for the center.

“All of us in the MC Foundation and in MC Athletics are grateful for the McMaths’ service to the University and their generous support of our golf teams,” Pace said. “How grateful we are for the people who have come alongside the McMaths to make the vision they had to benefit our men’s and women’s golf teams a reality.”

A former student of both McMaths, David Garner developed a longstanding relationship with the couple that led him to support the new facility.

“I consider John McMath a friend and a mentor,” Garner said. “We played golf together outside of school and have kept up a relationship ever since I graduated. The golf facility has been the topic of conversation for some time, so when it finally got to the point that it would come to fruition, we got behind it as much as we could.

“Any way we can support both the University and our friendship with the McMaths, we’ll continue to do that.”

Garner said he has witnessed how the sport of golf can make a profound difference in people’s lives.

“My goal as a Christian is to see the gospel get to all parts of the world,” he said. “I have played golf with a former MC golf team member who is now a pastor. I have seen how playing golf can translate into gospel sharing.

“This facility will provide MC with better access to student-athletes who will hopefully see the benefits of Christian education. They will see that not only does Christ matter first, school and golf matter. The better-quality athletes you can attract, the better the golf program becomes, and it will continue to build from there.”

Jones said it is “highly appropriate” that the new facility is named for the McMaths.

“They helped us restart the golf program when we were in Division III,” he said. “We needed a coach and we asked John if he would coach. Not only did he coach the golf team free of charge for three years, but he also spent his own money on the program.

“Golf is not the only thing the McMaths have done for MC Athletics. They have been incredible supporters of basketball and all the other sports too. John and Charlotte have been amazing. I am proud for them, and they are both deserving.”

Bizot, who has known the McMaths since his days as a superlative player on the Choctaws men’s basketball team, said he is pleased that the facility honors a couple who has dedicated a significant amount of time to the MC community.

“The McMaths mean so much to many on our campus,” he said. “They both continue to make a positive impact on our students and our student-athletes. It gives me great happiness to have their name on this building.”

“Dr. Charlotte McMath is a professor emeritus, and at the groundbreaking, it was announced that (John) McMath would be named golf coach emeritus, too. To see the joy that brought him, the satisfaction he got from that, was great.

“It’s meaningful to be able to show the McMaths how much we love them and to know their name will be on this facility as long as the school is here.”