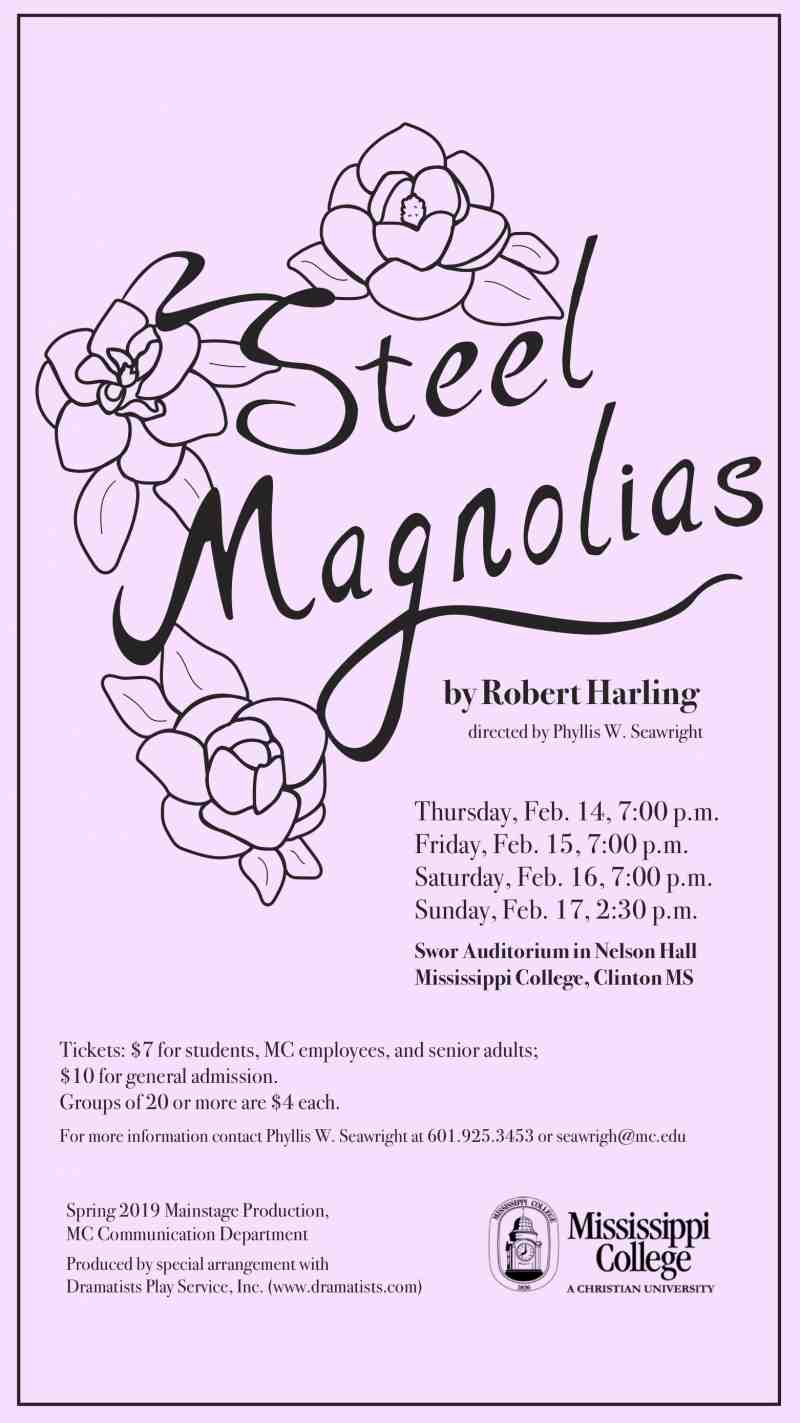 Thirty years later, the Mississippi College Tribal Players will showcase their talents in the stage version on the Clinton campus. Productions run from February 14-17 at Swor Auditorium.

Written in tribute to his sister, his mother and the women supporting them, Harling’s work captures the essence of Southern culture. Audiences packing New York City’s Lucille Lortel Theatre for three years raved about performances that mixed tears with laughter. The popular film garnered Roberts, 22, an Academy Award nomination to transform the Georgia native into a star.

“Being part of Steel Magnolias is an absolute dream,” says MC senior Lexey Monceaux, who plays the role of Annelle Dupuy-DeSoto. “She’s a little silly, a little funny and displays a whole lot of passion.”

Harling’s play, said the Clanton, Alabama resident, “really embodies the culture of Southern women in a way that touches the heart like no other.”

MC junior Sarah Gremillion is honored to portray Clairee Belcher, the former first lady of Chinquapin. “Clairee is a dashing former first lady whose biting wit charms and honors those around her. Clairee’s love for sweets, football and bits of gossip humanize her.”

Another Louisiana native, Emmie Fusion of Baton Rouge is delighted to be cast as Truvy Jones. Playing Truvy,  says the public relations major and MC junior “taught me to be bold in kindness, laugh through the tears, and always look at the bright side of things.”

A native of Philadelphia, Pennsylvania (who now lives in Ridgeland), MC senior Carley Claudio is perfect as the loud, proud and sharp-tongued Ouiser Boudreaux. What sums up her role in a few words? “Ouiser is a tough Southern belle ready to cut you to ribbons with her eyes alone.” She’s a dog-lover, too.

A biological sciences major constantly hitting the books, Carley Claudio says starring in “Steel Magnolias” may be the most fun she’s experienced in three years at Mississippi College.

Tickets are now on sale for the Communication Department production. Tickets cost $7 for students, MC employees and senior adults. The price is $10 for general admission. The cost is $4 per ticket for groups of 20 or more.