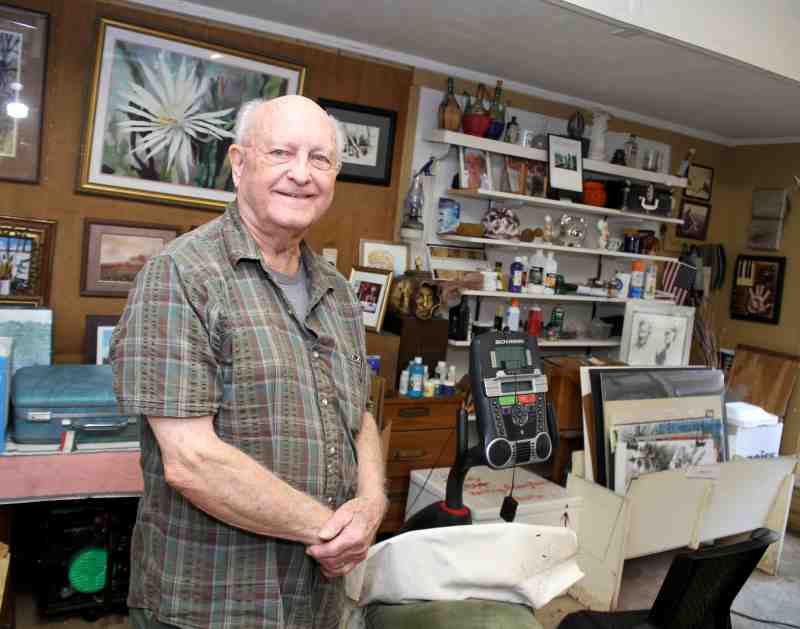 The former Student Gallery at Mississippi College will be renamed for noted artist Bob Allan Dunaway.

A 1961 graduate of MC, Dunaway teamed with Sam Gore as the Art Department’s only two faculty members in the 1960s. The endowment he and his late wife, Jeanette, began several years ago has generated scholarships that have attracted outstanding community college art students to MC. And much of the art and photography produced by he and his wife, Mary Lynn, who earned her master’s degree at MC in 1977, have been showcased in the Gore Galleries.

On Sunday, May 1, the Walthall County native’s name will become inextricably linked with his alma mater when the Student Gallery in the Samuel Marshall Gore Art Galleries is formally named the Bob Allan Dunaway Gallery.

The MC Art Department will host a reception and dedication of the Dunaway Gallery from 2-4 p.m. at the Gore Galleries on 199 Monroe Street in Clinton. Dunaway will be on hand for the dedication.

Randy Jolly, instructor in art and director of the Gore Galleries, said the event will feature an exhibition of the 89-year-old watercolorist, acrylic painter, and sculptor’s work.

“This represents an opportunity to honor Bob Allan Dunaway for his support and dedication to Mississippi College and the Department of Art,” Jolly said. “We thought it was very appropriate that we rename the Student Gallery after Bob because he is an educator at heart.

“Students have been so important in his life, so what a perfect way to celebrate him by naming the Student Gallery after him.”

Jolly said the list of students who Dunaway has taught would include many faculty members in the Art Department at MC, as well as renowned watercolorist Wyatt Waters.

“Bob served as chair of the Art Department at Hinds Community College for many years, and he has ministered to and taught many of our faculty and many MC alumni,” Jolly said. “He has been a supporter of art in Clinton and is known regionally as a wonderful artist.

“He has also given us work for the gallery’s permanent collection.”

Dunaway’s interest in art began when he visited several historical art centers in Morocco, Germany, and Libya while serving in the U.S. Air Force. He remained in the active reserve and the Air National Guard, where he retired as chief master sergeant with 30 years of service.

After serving on the MC faculty, he joined Hinds in 1971 as chair of the Art Department. He received the Alumni Association Volunteer of the Year Award and was named professor emeritus at Hinds.

“Bob is a good teacher in the way I think a good teacher should be: he’s done his job if he inspires his students,” said Walters, who is scheduled to speak at the Dunaway Gallery dedication. “I did about a hundred water-colors before taking his class; now, I’ve done several thousand. I believe he inspired me.

“Bob is a rare individual who can incorporate humor into his teaching. When I’ve given some demonstrations to groups that knew Bob pretty well, I’ve been accused of belonging to the ‘Teaching School of Bob Dunaway’ because I liked to put humor in mine, too.”

Local artist Maryjane Whitfield, 2013 Mississippi Art Education Association Emeritus Art Educator of the Year, describes Dunaway as one of the first “real” art professors she ever had.

“My high school had no art program, and I have been so grateful that my first classroom experiences were informed by two men, one of them Bob Dunaway, who were not only extremely talented, but also good, loving people who truly cared about their students,” Whitfield said. “Bob was funny and full of such energy. He was versatile and could watercolor with ease and precision, and paint signs in the same way.”

After visiting her first art museum on one of Dunaway’s class trips, Whitfield said she discovered how important art education was to her.

“I was hooked!” she said. “I went on to have a 34-year career teaching art. I loved what I did. I loved the students. And I had a wonderful role model for being a teacher in Mr. Dunaway.

“He deserves this honor and so much more, because we were not the only students for whom he was a mentor and family.”

“Like Bob and Dr. Gore both, my philosophy is, you’ve got to love what you’re doing,” he said. “If you love painting, you continue to do it. If you don’t, you’ve got to find something else to do - the same with teaching. Bob loves what he does, and he loves watercolors, too.

“Bob and I stayed painters, and my association with Bob has been quite rewarding and beneficial throughout my life.”

Jolly said the dedication will be free of charge and open to the public.

“All are welcome to come by and visit with Bob and congratulate him,” Jolly said. “It ought to be an exciting afternoon. Bob has a wonderful sense of humor, and I’m sure he’ll have everybody in stitches.”