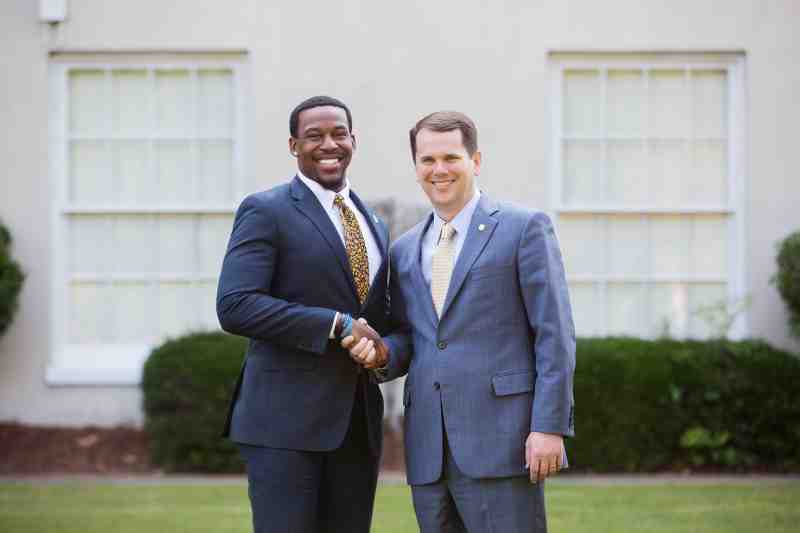 From the MC Singers to the university’s Jazz Band, students will showcase their talents at events running from a church worship service on March 24 through March 29th inauguration ceremonies.

Students are pleased to participate in a big way to celebrate President Thompson’s inauguration. The new leader of the Christian university’s family, Thompson is off to a great start as the university’s 20th president, students say.

A 20-year-old resident of Diamondhead on the Mississippi Gulf Coast, Feazelle gives top grades to Thompson for his adept communication skills. “I believe his ability to relate to the students is one of his best qualities,” he said.

“Dr. Thompson is a very approachable man and speaks sincerely whenever he is talking. His intelligence and expertise helps for myself and other students around him to grow intellectually,” adds the business administration major.

Beginning his duties this Spring as the 2019-20 SGA president, Aaron expects to learn even more from the new MC president.

About 30 students will be featured in the inauguration procession on the Quad on March 29 to formally install Dr. Thompson as the institution’s chief executive.

Other student delegates include Zach Klopman of Alpha Epsilon Delta, the honor society in biology, and Amber Kaminski of the Delta Mu Delta honor society for business. Emily Hankins, who represents Lambda Pi Eta, the honor society for communication students and Hannah Brown of the Kappa Delta Pi honor chapter for education are signed up as well. MC Law’s Moot Court Board, the Black Law Students Association, and the Christian Legal Society will send student leaders, too.

“Since Dr. Thompson arrived, there has been a huge morale boost on campus,” says Dickerson, a public relations major. “You can count on him to hype up any event the students may plan.”

Thompson is often spotted walking or traveling around campus via his golf cart. There are meetings with faculty, staff, alumni, trustees and notable visitors. But students seem to be priority one.

“He is eager to know the students and he wants to give each student a chance to voice their opinion,” Dickerson said. “He is definitely a great ambassador for the university.”

Students taking center stage at the March 24 worship service at First Baptist Church Clinton, with the MC Singers to perform gospel selections with the community invited. It starts at 6 p.m. Sunday.

A March 28 dinner/concert on the streets of Olde Towne Clinton will feature student groups. Visitors can peel-and-eat shrimp & jambalaya, while they are entertained that Thursday from 5-9 p.m.

The MC Jazz Band will put crowds in a festive mood at a reception at the Piazza and Jennings Hall courtyard following the March 29 inauguration ceremony (it begins at 4 p.m. in the Quad). The public is invited to attend.