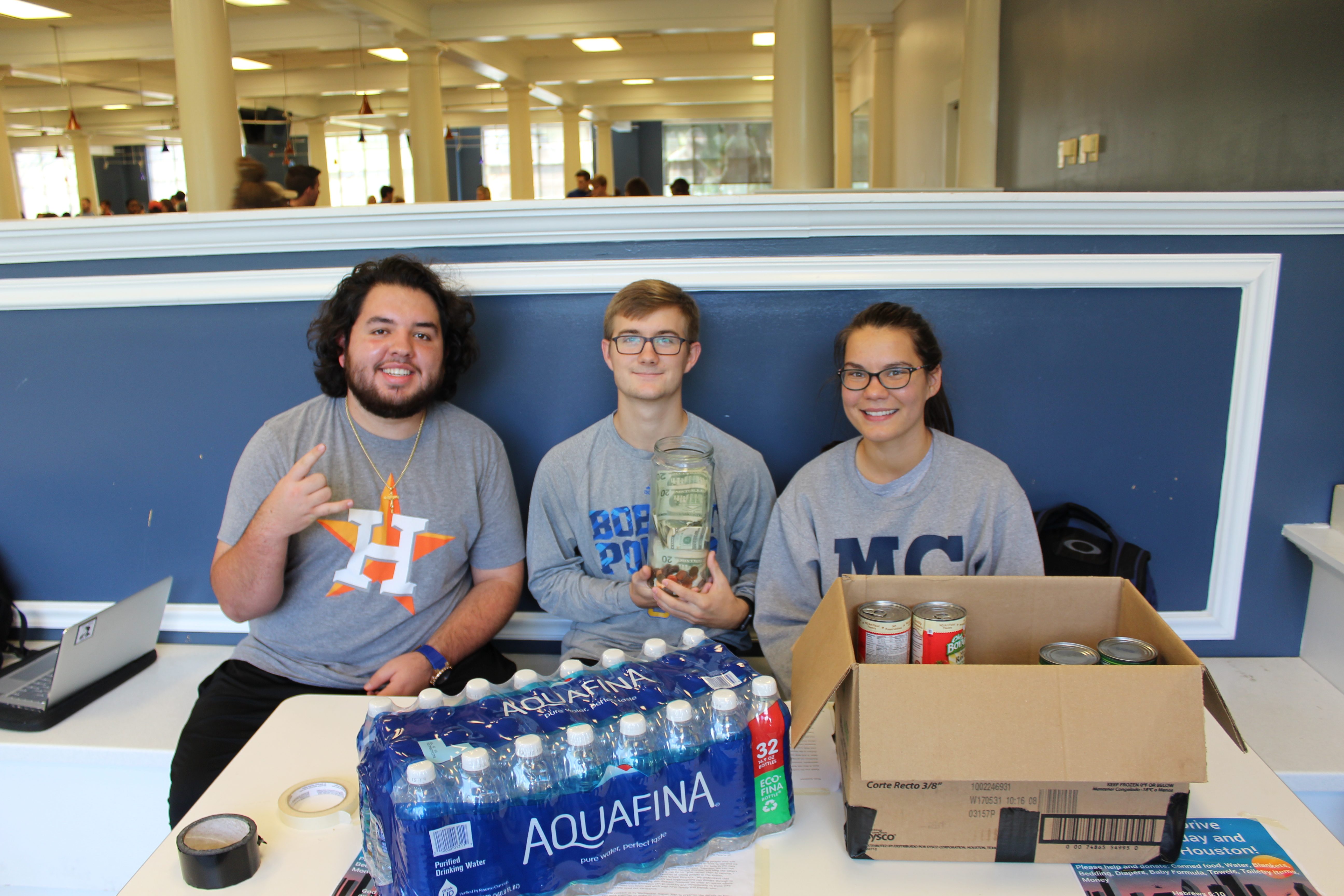 These Mississippi College student leaders were back on Sept. 1 raising cash and collecting supplies to assist Texas flood victims on September 1. Pictured in the school cafeteria: MC students: SGA Vice President Alex Rodriguez of Houston, Texas, Perry Broom of Hattiesburg and Emily Kirk of Havelock, North Carolina. MC will resume the drive on the Clinton campus on September 5.

Within a few hours after the MC campaign began August 31, students chipped in more than $400. It was early afternoon, and the money and supplies kept piling up at a table in the school cafeteria. By Friday, the cash contributions approached $500. MC student leaders pledge to keep the campaign going on September 5.

“It’s beautiful to see so many people come together for this cause,” says Rodriguez, the MC Student Government Association vice president.

The Houston resident is among several family members living in America’s 4th largest city. He thanks God that none of his relatives lost their homes or cars and all are safe. “I’m blessed and lucky. Nobody was harmed.”

The SGA and Mortar Board chapter teamed up to initiate the fund drive at the Baptist-affiliated university. It continues through Friday before students leave for the Labor Day Weekend. There are collection boxes stationed in academic buildings across the Clinton campus.

The greater Houston area was slammed by the powerful hurricane and overwhelmed by more than four feet of rain since last Friday. Widespread flooding continues in southeastern Texas and into Louisiana.

MC students like Esther Tibbs are happy to give money or drop off bars of soap, baby wet wipes, formula, clothing and much more. The donations will go to the 33,000-plus people evacuated to Houston area shelters.

“I love spending money on other people,” says Tibbs, an MC senior from Laurel. “I couldn’t imagine losing all of that.”

MC students Milena Dutra of Brazil and Macey Spears of Fort Worth, Texas were among several volunteers staffing the cafeteria table Thursday. The student senators encouraged classmates to give what they could.

“My heart is in Texas, definitely,” Dutra said.

She personally knows of one Corpus Christi, Texas family badly impacted by Hurricane Harvey. And Milena wants to help that family and others trying to cope. Helicopters continue to rescue storm-weary Texans from rooftops.

At Mississippi College, “it’s been a nice response,” Dutra said.

It was 12 years ago that Mississippians and Louisiana residents, especially in the New Orleans area, faced the wrath of Hurricane Katrina. Thousands of Katrina evacuees relocated to Houston.

Macey Spears is staying in contact with her sister, who lives in Houston, but fortunately was unharmed. She expects her sister, now staying with her parents, will return home Sunday.

Laguna social tribe members Sarah Jenkins of Olive Branch and Kitty Kelsey of Collierville, Tennessee are SGA senators assisting the drive. They feel connected to the emergency in south Texas. Several of their Laguna social tribe sisters are from the Houston area.

Hurricane Harvey and flooding pounded the Texas hometown of MC senior Sydney Oliver. “Most everyone has lost their cars and just about everything else.”

The 22-year-old marketing major grew up in Kingwood, where her parents still live. Kingwood High where Sydney attended school is dealing with three feet of floodwater in its buildings. She praised the work of Houston Texans pro football star JJ Watt for helping raise $11 million to help Texas communities rebuild.