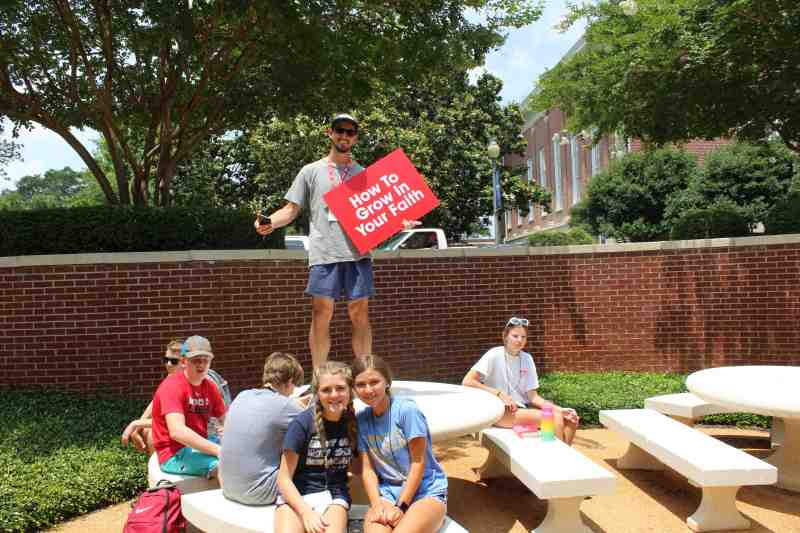 Students build their faith and take part in sports activities during summer camps at MC. Fuge campers are pictured on June 4.

It’s steamy in Central Mississippi during early June as the first week of camp kicks off. A little over 500 young people from across the Southeast and other regions are visiting the Clinton campus. They’re building their faith, making friends and stepping up their skills as athletes.

For Anna Miller of Delhi, Louisiana, her first visit to MC’s Fuge Camp proved to be a blessing. “It’s fun. You get to be active, learn about God and meet new people,” said the 14-year-old from Newton Baptist Church.

Anna likes the way the camp staff rolls from the early morning through the evening hours. “They like to get crazy and they love God,” Miller said. Mississippi College in Clinton is a one hour 45-minute drive to her home in the Bayou State.

Taking a break from a drama activity, campers noted other positives about the five-day summer camp.

Camper Marissa McAlexander of Denham Springs, Louisiana says everything at Fuge camp is done for a reason. “Sports and other stuff relates back to God and the Gospel,’’ says the Hebron Baptist Church member.

Adults also gave their first week of camp a thumbs up.

The teens were pleased with the food in the cafeteria, and praised the contemporary worship band at Swor Auditorium. They were eager to join the basketball tournament, but also wanted to spend more time with God.

“There’s plenty of time for the Bible,” Jones said.

Cheli Vance, program coordinator of the MC Office of Continuing Education, works with director Ken Gilliam, to oversee the summer camps. The season ends July 19 with Super Summer camps seeking to enhance leadership abilities for more than 1,000 Baptist youth. By the final day, there will be more than 5,000 summer campers signed up.

As for Fuge camp, Vance sees many of the same kids again. “A lot come every year because they love MC,” she said. In some cases, campers return as MC undergraduates.

During the first week, there are 272 Fuge campers coming from Alabama, Mississippi, Louisiana, Arkansas, Florida and Oklahoma. When counting staff, the number exceeds 300.

Some campers come from communities as close as Sandhill, Mississippi in Rankin County. Others traveled from as far away as Shoals Baptist Church in Hugo, Oklahoma.

On Thursday, up to 300 high school football players will take part in drills during gridiron camp at Robinson-Hale Stadium. It’s run by MC Choctaws head coach John Bland and his staff. Assisting will be coaches at South Alabama, Louisiana-Lafayette, and Central Arkansas.

There’s always a Plan B should rain soak the Clinton campus. Campers would move indoors to the Baptist Healthplex or Alumni Gym. There’s a 50 percent chance of scattered thunderstorms in the forecast Wednesday and it climbs to 90 percent through Saturday. A team basketball shootout is set for June 8, but won’t be impacted by the weather.