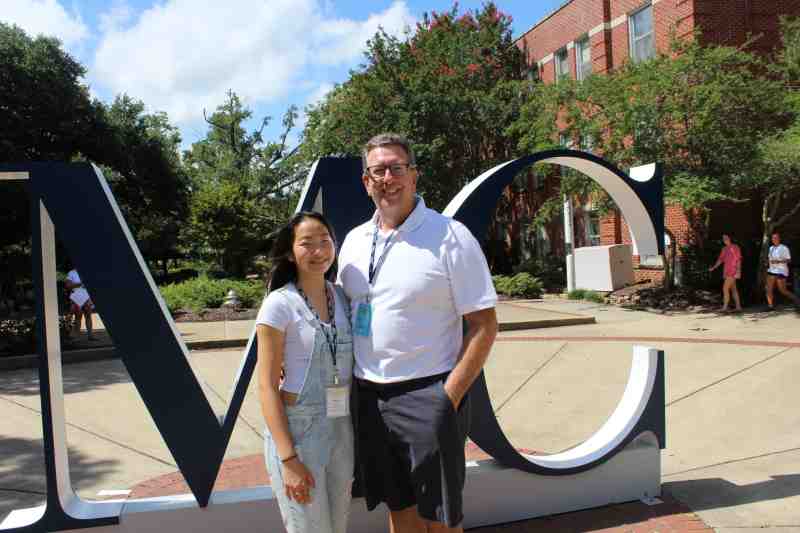 Mississippi College freshman Macy Parris joins her Dad, Ray Parris, on the Clinton campus as orientation winds down on July 12. A resident of Murrieta, California, Macy is a biology/pre-med major. Macy discovered MC online when searching America's Christian colleges. Macy believes the nation's 2nd oldest Baptist college is a place where she can "make memories and grow in my faith.''The final freshmen orientation of the summer attracted 102 students from across the Southeast, Illinois, California and as far away as Indonesia. A marathon of orientation activities Thursday and Friday gave students a taste of the MC experience as Fall classes near.

Back home in their native Mississippi, the couple had good reason to visit the Clinton campus on a humid summer day.

They’ve been through this before as members of the Blue & Gold family. Their oldest daughter, Melody, is a 2017 MC graduate. Their son, Drew Williams, is a 2015 MC grad.

Lindsey Williams plans to enroll in the Christian university’s interdisciplinary studies program. It will combine writing with political science and entrepreneurship. She plans to become a writer to start her career.

Their two oldest children thoroughly enjoyed their Mississippi College experience, saying it felt like home. That same hometown feel applied decades ago for Matt Williams, who grew up on the Gulf Coast, and his wife, Shea, a Natchez native.

Whether they’re sons and daughters of alums or arrived without direct MC connections, 102 freshmen attending orientation activities had a blast.

They visited with President Blake Thompson and faculty members as well as student leaders. It was a nice turnout of freshmen from across the Southeast. Others came from as far away as California and Illinois, said administrator Jonathan Ambrose.

“I wanted a small Christian college, and we found it online,” said freshman Macy Parris of Murrieta, California. “I took a visit and liked the community,” added the biology/pre-med major. “I will be able to make memories here and grow in my faith.” Her dad, Ray Parris, joined her for the journey to Central Mississippi.

MC’s third freshmen orientation of the Summer of 2019 was in full swing. Students registered for Fall classes. They learned about student organizations, including ministries, and discovered the area’s cultural attractions. They stopped by the Aven Fine Arts Building, visited the campus bookstore and the Leland Speed Library. The newcomers found time for fun.

“I like the community here,” said freshman Elizabeth “Bizzy” Kalmbach. As the 18-year-old New Orleans native gathered for lunch with new friends at the school cafeteria, she’s delighted to be an MC Choctaw. “It’s just one big family.”

Freshman Alexander Collins, 18, of Union, is equally pleased with his decision to enroll. It’s part of the family’s DNA. His dad, Chris Collins, is an MC graduate, and so is his sister, Katie.

MC’s 20th president, Dr. Thompson announced the creation of the Honors College and expansion of international programs as part of his March 29 inauguration address.