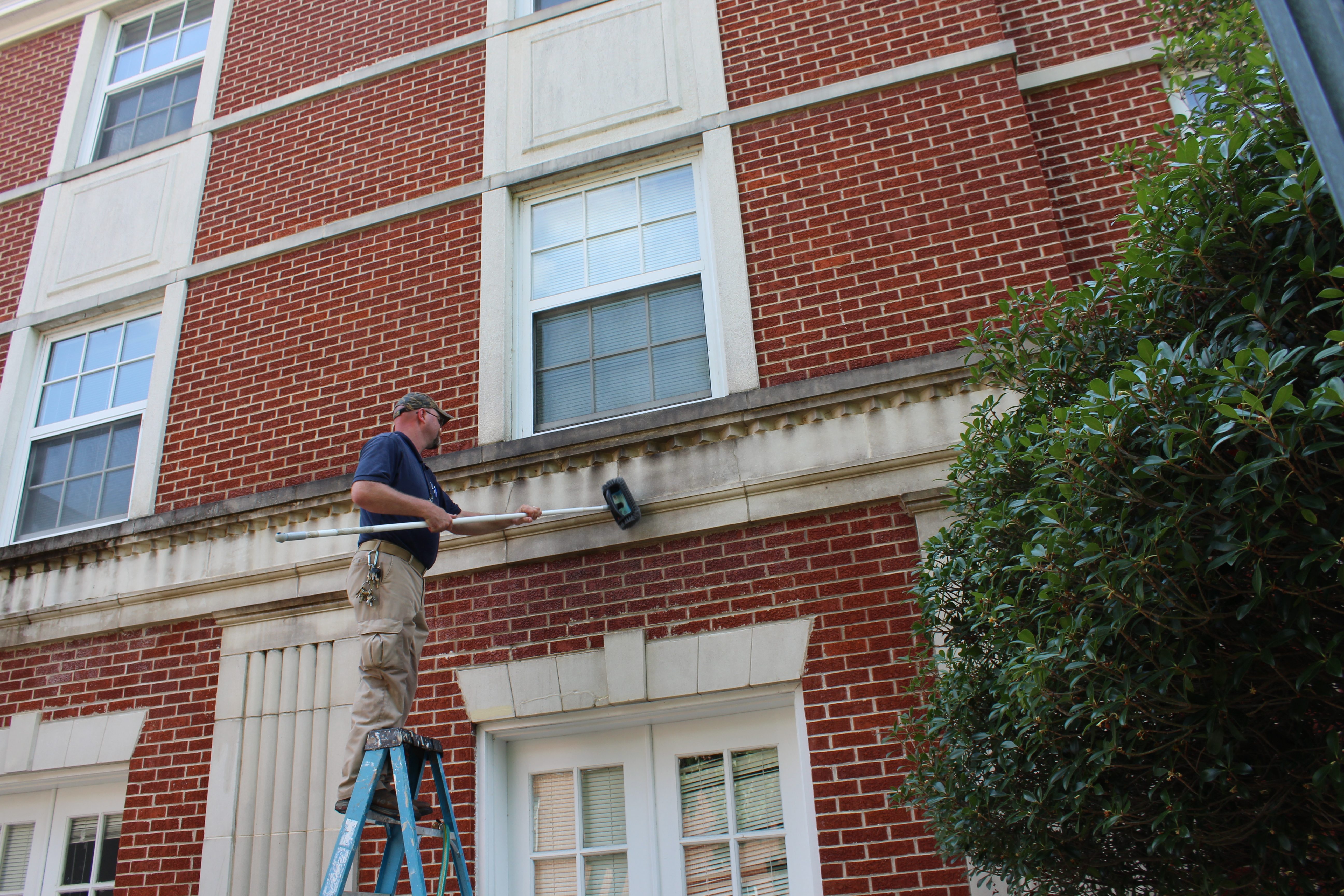 Work to improve Mississippi College residence halls and other facilities will continue during the summer months. In late May, Joshua Zerby sprays away mildew near the front entrance at Latimer-Webb Hall. He works for MC's physical plant office.

Temperatures climbed into the mid-90s as water splashed on the exterior of Mississippi College’s Latimer Webb Hall.

The South’s heat wave didn’t stop Joshua Zerby from doing his job. The MC employee used his hose to get rid of mildew on the front of the building in late May. Several residence halls and other buildings at the Christian university are getting spruced up. Improvements such as new roofs are happening at other facilities across the Clinton campus.

From late May through late August, Mississippi College facilities will undergo renovations, simple cleanup and other improvements. The summer of 2018 is no different.

The price tag will be a little over $660,000 for the growing list of projects, says Steve Stanford, vice president for administration.

At the 5,200-student university, the biggest projects from a cost standpoint include the new roof on the Aven Fine Arts Building along College Street. Jennings annex water proofing work and the resurfacing of restrooms and showers in Chrestman Hall are other major projects.

“Several items will be addressed that have utility savings or pay-back benefits,” Stanford said. “We want to address these since they offer long-term savings due to conserving energy.”

One project, he said, will be to replace outside lighting in some parking areas with LED lights. “This work also qualified us for a special rebate from Entergy,” Stanford said.

Other summer energy conservation projects on the Clinton campus include the replacement of HVAC units.

Work will continue at several of MC’s landmark buildings at the 192-year-old university. Opened in 1860, Provine Chapel will see its majestic front columns undergo repairs and new finishes. Provine Chapel remains the oldest building on campus. Alumni Gym’s upper east windows will be the first ones replaced.

In addition, renovations include adding a larger classroom in Cockroft Hall, home of the School of Nursing. Classrooms/meeting rooms in Nelson Hall, the university’s administration building, will be renovated in the coming weeks.

There will be projects scheduled this summer to repair and paint the Latimer House. The facility provides overnight lodging to Mississippi College alumni and other special guests.

Also on the to-do list: the former WHJT radio station studio in the Aven Fine Arts Building will be converted into new lab space for the Department of Communication. New counseling rooms will be constructed at the Dyslexia Center near MC soccer fields.

Football fans may notice improvements to sports facilities. Workers will replace the damaged filming platform at Robinson-Hale Stadium. The MC Choctaws kick off their 2018 football season at home against Clark Atlanta on August 30.