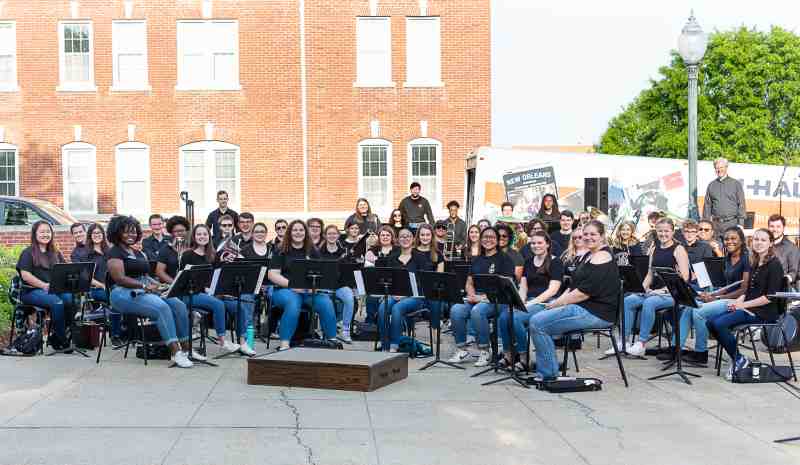 Symphonic Winds, pictured here in 2021, will conclude its two-day, four-performance tour of south Mississippi high schools with its annual Winter Concert at MC.

Fans of classic concert band music will be in for a treat when Mississippi College’s Symphonic Winds take the Swor Auditorium stage in Nelson Hall at 7:30 p.m. on Monday, Feb. 28, for its annual Winter Concert. The concert is free to the public.

The 50-student ensemble filled with regal woodwinds, stately brass, and powerful percussion will perform a selection of popular pieces by a number of legendary 20th century composers, including Leonard Bernstein, Percy Grainger, and David Gillingham.

Dr. Craig Young, MC director of bands and professor of music in the Department of Music at MC, hand-selected the repertoire for the concert. In his 23rd year directing the Symphonic Winds, Young said choosing the right music is the most difficult aspect of each performance.

“Programming is always a challenge,” he said. “Choosing music that is going to challenge and excite the students while not being too difficult for them to achieve. I try to select pieces they’re going to learn from and get something out of without being too easy or too hard to play.

“After doing this for so many years, I kind of have a feel for the pieces that are going to be enjoyed. There has to be some formula so you hit the right combination of pieces.”

The Winter Concert will follow the band’s two-day, four-performance tour of high schools throughout south Mississippi. COVID-19 prevented the ensemble from touring last year, so many Symphonic Winds musicians are eager to perform on the road.

“Maybe half the band has been on a tour before,” Young said. “The students love doing it, but half of them don’t know what to expect. Usually after the first performance, they really get to enjoy it.

“I really love going out and sharing what we do with the high schools. That’s one of my greatest joys.”

Symphonic Winds will replicate its road performance during the Winter Concert.

“This is our ‘tour concert,’” Young said. “I’m always thinking about the literature the high school students want to hear. Most of it is band music that has been composed in the 20th and 21st centuries - One piece was composed in 2001.

“We’re constantly looking for good music that’s being composed at the current time.”

The program for the Winter Concert will include:

Young said the group of highly skilled student musicians has improved in quality throughout his tenure. Interestingly, only about 20 percent of today’s Symphonic Winds performers are music majors – he estimates there are more premed majors in the band than music majors.

What unites them all, he said, is their love of music. Symphonic Winds performances are brisk and designed to appeal to a wide range of musical enthusiasts.

“The concert is not long – about an hour – because we want people to come out and enjoy it,” he said. “We’ve always had good crowds at the performances, and we would love to have a great crowd this time, too.”

As a lead-in to the Symphonic Winds Winter Concert, MC’s popular Jazz Band is scheduled to perform at 7:30 p.m. on Tuesday, Feb. 22, in the Jean Pittman Williams Recital Hall in the Aven Fine Arts Building. Young plays saxophone in the band, which explores music of all jazz periods, from the Big Band Era to the present. The Jazz Band concert is free of charge.