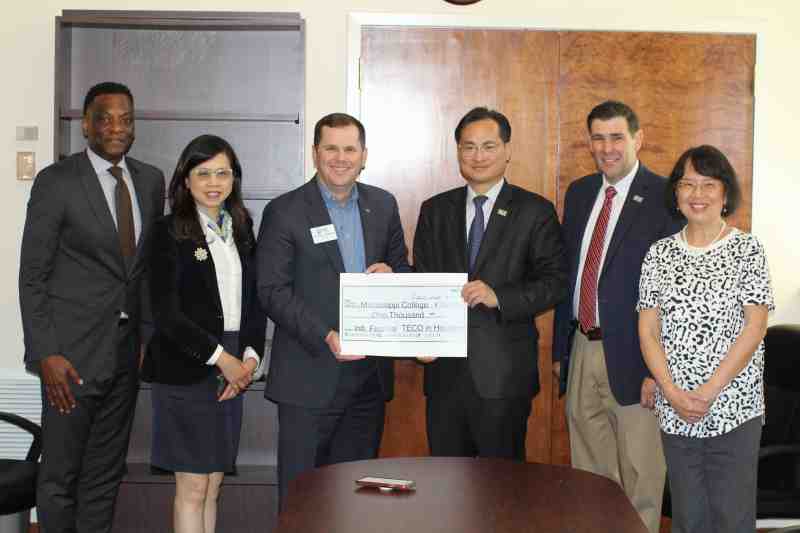 Taiwan is a bustling, mountainous island nation in Southeast Asia, a leading industrial power of the Pacific Rim. Its official language is Mandarin Chinese, a vernacular richly steeped in history and culture.

A pair of grants recently awarded to Mississippi College by governmental agencies in Taiwan positions the University as one of the elite centers of Chinese language study in the U.S.

MC is one of 20 universities in the U.S. to receive a Taiwan Ministry of Education grant to establish an exchange program for MC students to learn Mandarin Chinese in the Republic of China. In addition, MC is among only six universities to receive a three-year, $70,000-per-year grant from the Taiwan Ministry of Foreign Affairs to support the program.

Called the Taiwan Huayu (Mandarin Chinese) Bilingual Exchanges of Selected Talent (BEST) Program, the agreements encourage cooperation between universities in Taiwan and those in the U.S. and Europe and promote Chinese-language education. MC students can take advantage of the opportunity to learn Mandarin Chinese at Chung Yuan Christian University in Taiwan, with tuition, room, and board paid for the entire stay.

“We want to encourage students to take advantage of this fantastic opportunity,” said Piletz, a native of Taiwan. “I think every student should study abroad. It broadens their horizons.”

For almost a decade, MC has enjoyed a successful relationship with CYCU, which had been a partner university with Jackson State University. After developing the Office of Chinese Initiatives at JSU, Piletz joined the Office of Global Education at MC, and CYCU followed as a charter university to MC in 2013.

“The exchange program between MC and CYCU has been very robust,” Piletz said. “CYCU has sent one or two exchange students to MC every year, and during the summer, MC has sent students to join their summer camp.”

Last September, CYCU contacted Piletz with an idea to expand the relationship. The Taiwan Ministry of Education expressed a desire to build Chinese-language programs at Taiwan’s partner schools through grants that would send highly trained Mandarin Chinese teachers to their respective partner schools in North America or Europe. They submitted a grant proposal, which was approved in January.

Under terms of the grant, CYCU will send a professionally trained Huayu teacher to MC and offer the study abroad program for MC students to travel to CYCU for three, six, or 12 months to learn Mandarin Chinese. The first summer program would take place from May 23 to Aug. 5.

Amy Williamson, who helped Piletz develop the proposal for the Taiwan Ministry of Education grant, said she was intrigued by what it offered MC’s students.

“Chinese is a minor in our department, and students have to study abroad in order to complete it,” Williamson said. “This gives the students a strong academic program, a good deal of financial support, and the chance to learn in an immersive environment in Taiwan.

“I was also excited about the exchange professor who will be on MC’s campus. Along with our lead Chinese professor, the professor from Taiwan will help us build the program here. The professors and staff from CYCU and the staff from the Taiwan Huayu BEST Program have developed the program with us, and it has been a pleasure to work with them.”

MC students will receive a stipend of $900 each month to cover tuition, room, and meals. The grant covers about half the cost of their round-trip flights to Taiwan.

After Dr. Beth Stapleton, director of MC’s McMillan Center for Education Abroad, attended an information session about the program, she offered another $400-per-student stipend from the MAC Center to help defray the cost of travel.

“The MAC Center supports all programs abroad, but this one is a special program,” Stapleton said. “Knowing another language is beneficial in so many ways. The best way to connect to any customer or client is to know the language of that person. Language involves many aspects of culture. If you win over the heart, you can, many times, win over the business, too.

“There is no substitute for acquiring language in the native land from native speakers. There is so much more language and interaction outside of the classroom in the community. Those interactions and negotiations of meaning are most beneficial for authentic language acquisition. Besides that, Taiwan is an amazing country to live in and experience. When we live in new cultures, we grow as humans.”

Before coming to MC, Piletz taught Mandarin Chinese at JSU for seven years. She said many Westerners have the perception that Mandarin is a difficult language to learn, but this program should dispel that notion among MC students.

“When I first started teaching Chinese at JSU, all of the students feared it would be hard to learn,” she said. “But they found that Chinese is easy to speak, because Chinese grammar doesn’t have any tenses or gender. Once you know the system, it’s very logical and not difficult to learn.

“When you go to Taiwan, you’re exposed to the language every day. And once you’re immersed in the culture, it helps you learn to speak the language.”

One of her former pupils would agree. While earning his B.A. in English at JSU, Adam Jones decided to visit Taiwan while pursuing a minor in Chinese Language.

“I had already spent two summers in mainland China and was intrigued by the cultural mélange that Taiwan presented with its Chinese, Japanese, and other Asian influences,” said Jones, who earned his Master’s of English at MC. “I spent every weekday morning in immersive language classes and most afternoons participating in workshops that taught specific aspects of Chinese culture. I had a completely immersive experience.

“One important aspect of my trip was service learning. I was asked to do a little volunteer work a few times a week, and the one I enjoyed the most was teaching local elementary and middle school students English.”

“I can track the enjoyment and fulfillment that I have in my career now with my experiences in Taiwan,” he said. “As China continues to become a more significant global power, the Chinese language will also increase its relevance. With the only exception being Spanish, Mandarin Chinese is the most needed second language for an American to learn.

“I would absolutely and without reservation recommend this program to MC students. It allows students to develop career-relevant skills, but it also grants an opportunity for young people to broaden their horizons by living in another country.”

Williamson said MC students who participate in the Taiwan Huayu BEST Program could expect to enjoy a similar experience.

“The best way to learn a language is through immersion,” she said. “This study abroad experience involves study at the language-learning institute and enhances that through living and interacting with speakers outside of class. Students will come back with a lot of Mandarin!

“After English, Mandarin is the second-most widely spoken world language. In any discipline, learning additional languages allows the practitioner to effectively and appropriately communicate with clients. Learning a language in the country and culture that speaks it is an advantage.”

About one-fifth of the world’s population is Chinese, and about one quarter speaks Mandarin, Piletz said. Therefore, Mandarin is an important language to learn, especially for those interested in reaching others around the globe.

“Knowing Chinese gives you a leg up when it comes to finding a job, especially in business,” she said. “But if you are a mission-minded person and can speak Chinese, you can reach out to the Chinese population so much easier. You can share the Gospel more effectively yourself than using a translator.”

Because CYCU is a partner university with an accredited business school, credit for courses taken there seamlessly transfers to MC. The business courses at CYCU are taught in English.

Piletz said the Taiwan Huayu BEST program could also benefit students who minor in TESOL (Teaching English to Speakers of Other Languages).

“When students go to Taiwan to learn Chinese, at the same time, they can go to local elementary and junior high schools to teach English,” she said. ”Those hours will count as their practicum.

“It’s a ‘win-win’ situation for everybody.”

The first cohort of five students won’t be traveling to Taiwan alone: Piletz will accompany them on the trip and make sure they’re settled into their new environment before returning stateside.

She emphasized that any MC student from any major can travel to Taiwan and earn credit toward their degree.

“We want students to make the most of their opportunities,” she said. “After they graduate, I don’t want them to think back and say, ‘I could kick myself that I could have learned Mandarin in Taiwan, but I didn’t take the chance. I don’t want them to have any regrets.”

For more information about the Taiwan Huayu BEST Program, email Piletz at mcpiletz@mc.edu. For information about education abroad opportunities at Mississippi College, email the MAC Center at maccenter@mc.edu.

MC Stands Toe-to-Toe with the BEST

Mississippi College is among only six universities in the U.S. to receive a three-year, $70,000-per-year grant from the Ministry of Foreign Affairs in Taiwan to help fund the Taiwan Huayu BEST Program.