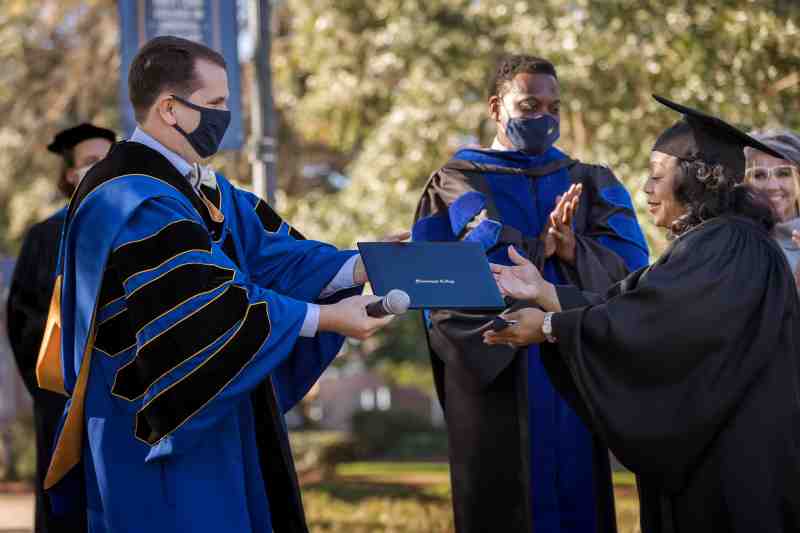 The Mississippian’s strengths as a communicator, role model, news anchor, and loving parent with a big heart for her community are off the charts. Maggie’s sea of admirers spans the USA. She’s received more than 500 awards over the years.

Her fan base is strong at Mississippi College, where leaders awarded her a bachelor of science degree in business administration on December 10 ceremonies. Maggie Wade began her studies in the early 1980s, but now President Blake Thompson and other leaders are proud to call the WLBT-TV news anchor an alumna.

“This is such a blessing,” the surprised WLBT-TV 3 anchor said on the Clinton campus as tears rolled down her cheeks. “Thank you so much!”

Magnolia Wade Dixon certainly earned the diploma for all that she’s done during her storied career. As an MC senior, Maggie landed a job at WLBT in 1982 and never left. Job responsibilities, career, and being a parent with two children got in the way of finishing her college studies. At MC, she received a diploma, an alumni pin, and lots of love from well-wishers.

America’s second oldest Baptist college, MC, built her skills as a communicator when she worked at the campus radio station. Mississippi College helped her faith blossom as a Christian woman, Wade said.

Ballou described her as the “perfect candidate” to be honored in this way. He’s featuring Maggie’s feat on WLBT’s broadcast Thursday evening.

“There is nobody more deserving,” Bassett said. “She wholeheartedly embodies the spirit of MC,” Barbie said. “I’ve seen her eyes light up when she talks about her time on campus as a student. She is a friend to all.”

It was a well-kept secret this fall. Maggie Wade visited MC to interview President Thompson for a story on the university’s virtual graduation Saturday. Later, Maggie was asked to wear a cap and gown as part of a video to promote her compelling story.

Before long, Maggie was escorted across the Quad dressed in cap and gown as the sounds of “Pomp and Circumstance” played. MC officials and friends cheered her big moment. “Oh, my God,” she said as President Thompson joined Keith Elder, the university provost, and executive vice president, to award her the diploma. Several hugs followed. But MC supporters returned to social distancing.

The surprise worked perfectly. “I had no idea,” Maggie said.

"This is the capstone on our first-ever virtual commencement ceremony," Dr. Thompson told WLBT's Howard Ballou during a campus interview Thursday. "We're just so thankful for Maggie Wade and honored that she's now a Mississippi College alum."

Maggie Wade noted other MC connections. Her son received a master's in medical sciences at her alma mater. “I have lifelong friends on this campus.”

Only a few WLBT colleagues and school leaders knew of the plan in advance.

One was administrator Jim Turcotte, who attended MC in the early 1980s when Maggie was a classmate.

“There is so much more to Maggie than her job. Her love for children and other charitable causes embodies everything that we stand for at Mississippi College,” Turcotte said. “We say that our students are inspired while attending MC and go on to change the world. This is the perfect description of Maggie Wade’s life.”

The vice president for enrollment services and executive director of alumni affairs, Dr. Turcotte, is thrilled to call Maggie an alumna.

“Maggie Wade is one of the most trusted voices in our great state,” says MC Communication Department Chair Reid Vance.

“In an industry that sees journalists move from city to city with great frequency, Maggie has chosen to make metro Jackson her home. Viewers connect with her because she connects with us,” Vance said. “Mississippians are more informed and engaged in their communities because of her commitment.”

At WLBT, Maggie worked as a weather anchor, reporter, news anchor, and producer of children’s programming. “I can only do the news because I know the Good News.” She says her role is to be a servant to Mississippi children.