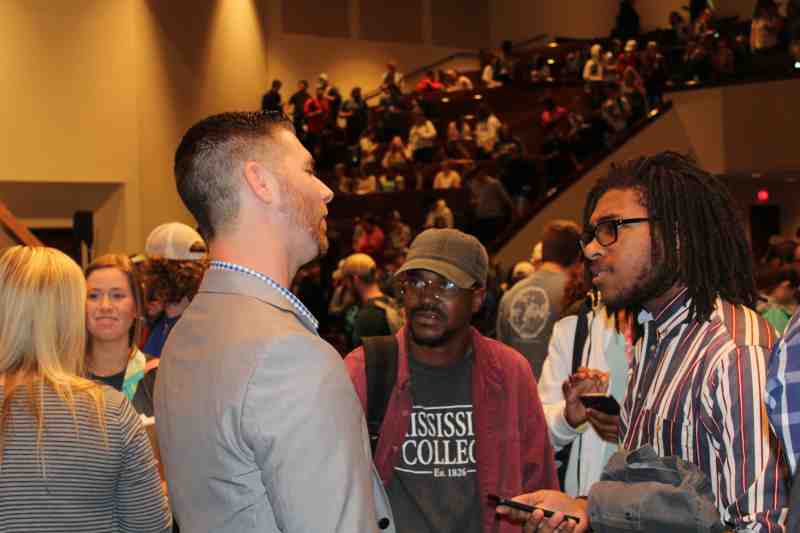 In rapid-fire delivery, Texas evangelist Shane Pruitt offered his quick take on all 66 books in the Bible. From Genesis to Revelation, he touched on each one in mere seconds.

The director of Evangelism for the Southern Baptists of Texas Convention, Pruitt brought a powerful message that scored points in early February with hundreds of Mississippi College students.

“Go to the table of contents – if you want God to speak, open his word,” the energetic speaker instructed students packing First Baptist Church Clinton. Many of the undergraduates put down their cell phones, scribbled notes and listened as Shane preached.

“Jesus is better than whatever we’re doing,” Pruitt advised his audience at a weekly chapel program at the Baptist-affiliated university. “Jesus is the one who will never let you down.”

During his February 5 message, Shane tossed in references to a shirtless Adam Levine & the Maroon 5 entertaining millions of TV viewers days earlier at Super Bowl 53 in Atlanta. He mentioned the letter he sent to a girl asking for a date as a sixth grader (they broke up four days later). He recalled heated Texas high school football rivalries near Waco where he grew up. Each reference was tied to his main points.

Pruitt encouraged the college students to make Jesus “No. 1 in your life,” even above hobbies, education and family. Idols, he said, “will let you down.”

Certainly, Pruitt is pretty familiar delivering messages about Christianity to people young and old alike across the USA.

A traveling communicator, evangelist and Bible teacher, Shane Pruitt shares the good news of Jesus Christ to tens of thousands of Americans each year. He recently penned a book “Nine Common Lies Christians Believe: And Why God’s Truth is Infinitely Better.” Published by Waterbrook Mulnomah and Penguin Random House, the book will be released February 19.

In ministry for more than 17 years, Pruitt didn’t travel to Mississippi College to promote his book. He visited the 5,200-student university to headline the school’s two-day Evangelism Lectures.

Students gave the Texas high marks after he clutched a Bible in his hands during his remarks for 45 minutes.

“I felt like he hit every single point,” said freshman Bradley Ducote, 19, of Bogue Chitto, Mississippi moments after the speaker exited the stage. “This was a good way to tell us about Christ.”

A nursing major from Fairhope, Alabama, Cairo Plauche, 19, agreed. “It was really good the way that he read out the Bible’s table of contents. It was very eye-opening.”

At one part of his spirited lecture in the church sanctuary, Shane Pruitt shouted that Jesus “is better than anything the world has to offer.”

Afterwards, freshman Suntasia Fleming, 17, of Gulfport says she believes in the speaker’s message. “Jesus is better than any idols, hopes and dreams,” said the Biloxi High School graduate.

Shane Pruitt writes a blog, and has penned articles for publications like “RELEVANT,” and “Christianity Today” along with “The Baptist Press” and “The Christian Post.” Away from his ministry, Shane makes family a big priority. Shane, his wife, Kasi, and the couple’s five children are residents of Rockwell, Texas.

To check out his most recent sermons, go to www.shanepruitt.com