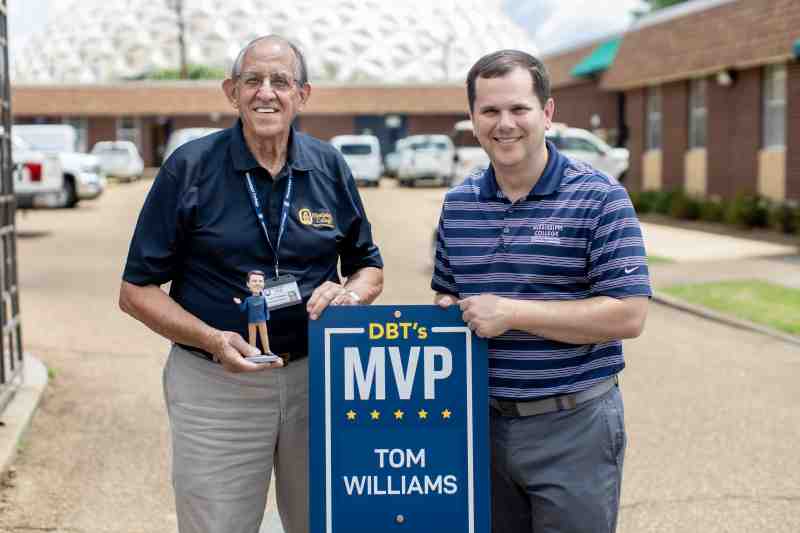 In his three decades of service to Mississippi College, Dr. Tom Williams has seen just about every aspect of university life. He spent many years as a professor and chair in the Department of Teacher Education and Leadership before taking the reins of the campus’s energy conservation program.

In 2016, Williams became executive director of campus operations, but the onset of the COVID-19 pandemic gave him one last role to fill before retiring: a seat on the campus’s COVID-response team, where he facilitated the distribution of materials and safety supplies to keep the campus safe.

Williams’s willingness to go the extra mile for the faculty, staff, and students at MC made him the clear choice for President Blake Thompson’s MVP award for July, a decision which MC staff member Cindy Bolls—who has worked with Williams since 1997—praises.

“Dr. Williams has always been widely respected by faculty and staff,” Bolls said. “Under his leadership, the Physical Plant has become a well-oiled machine. I’m so happy to hear that he was selected as the MVP for July!”

This latest accolade will be the last in a long line of awards earned by Williams over his storied career in education, as he prepares to retire in July.

Williams is a former administrator and teacher with the Jackson Public Schools, where he was recognized statewide as the Mississippi Teacher of the Year in the early 1980s. He joined the university’s faculty in 1989 and was honored for his teaching skills as a distinguished professor of the year on the Clinton campus.

The School of Education has also recognized him as its Alumni of the Year, and the athletic department acknowledged his efforts with one of its prestigious service awards.

For Williams, though, the relationships he’s made along the way are their own crowning achievement.

“I have enjoyed my years at Mississippi College. My friendships on campus will be a lasting source of pleasure,” Williams reflects. “The many wonderful students I taught will always be part of my memories.”

Though Williams will cherish the time he spent on the Clinton campus, the staunch supporter of Choctaw athletics and academics is looking forward to turning the next page to his well-deserved retirement. “I have grandchildren to visit, a yard to keep up, travels with my wife to embark on, and many, many books to read,” he said.