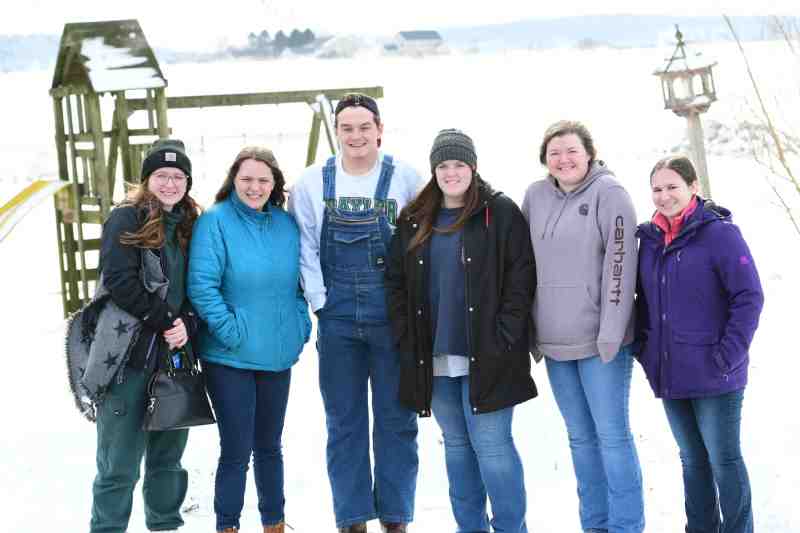 With only one archer scheduled to leave the squad – Ryan Ivey, a graduating senior, has been accepted into the initial class at the Kansas College of Osteopathic Medicine in Wichita – John McDonald, MC archery head coach, said the best is yet to come for his Blue and Gold archers.

The squad gained valuable experience in tournaments on the road and in Mississippi, competed against top collegiate and amateur performers in open divisions, and shared team-bonding experiences while traveling. Several of his archers took home individual awards.

The spring season kicked off Jan. 15 with the 2022 Mississippi Indoor Classic at the Mississippi Department of Wildlife and Fisheries Archery Center in Jackson. Despite competing in an open division against archers with a wide range of abilities, MC’s Emilia Miceli took first place and Anna Carraway captured second place in the Women’s Bowhunter Division.

“The Mississippi Indoor Classic allowed us to compete with archers of a very high caliber, making our archers push themselves further and become better prepared for the upcoming events,” McDonald said. “They performed well. There was a ‘shoot-down’ at the end of the classic, and it came down to two of our archers (Miceli and Carraway) shooting against each other.

“It was a very good experience for our students.”

The Mississippi event served as a tune-up for the Lancaster Archery Classic in Pennsylvania, the largest indoor archery tournament on the East Coast. Six MC students were among about 2,000 archers that withstood extremely cold temperatures – the thermostat dropped to 7 degrees at one point – in one of the worst blizzards to hit New England in many years.

Despite the weather outside, Miceli and Carraway repeated their earlier performance, finishing in first and second place, respectively, in the Collegiate Women’s Bowhunter category.

“They both scored well,” McDonald said. “Emilia started off slowly, but after a correction with her arrows, made a great comeback with a very strong finish. Anna had a steady, consistent performance.

“As a whole, the team performed down the line as I expected. They performed well.”

The archers took time from the event to experience aspects of Pennsylvania’s Amish culture. They watched locals ride in horse-drawn carriages and maneuver bicycles without pedals, and observed how families lived without electricity in their homes – although it was widely available in barns to keep the livestock warm and cozy.

Ivey was among the Blue and Gold archers selected to compete in the Lancaster tournament. The avid hunter said he had been pleased with his progress throughout his time at MC.

“I’m happy with the improvement I’ve seen,” said Ivey, who played soccer at Southwest Mississippi Community College in Summit before transferring to MC before his junior year. “The coaches have helped me to improve my shooting ability as an archer. At Lancaster, I shot the best I’ve shot in my two years at MC.”

Ivey’s participation on the archery team served as a welcome respite from a grueling academic load that saw him gain acceptance into medical school. Until then, he had planned to continue shooting for MC as a graduate student.

“I’m a very driven person. and I have goals I want to accomplish, no matter what it takes,” he said. “Archery takes a lot more patience than most sports. Day to day, your performance can change, which can lead to aggravation.

“It’s taught me you have to rely on others – you can’t just advise yourself. In medicine, there are several specialties, and you have to work with others to accomplish your goal.”

He said the shared experiences in MC Archery – like competing in the Lancaster tournament and the trip to Amish country – helped create a supportive environment among team members.

“Having somebody on the team to relate to and talk to about daily life, having someone you can lean on and support, brought a sense of community I needed as a transfer student,” said Ivey, whose high-water mark as an MC archer took place in last fall’s USA Archery Collegiate 3D National Tournament in Foley, Alabama, where he hit 16 targets. He said participating on the archery team has had practical benefits, too.

“It’s helped me fix what’s wrong with my hunting bow, fixed my form, and taught me to be patient. As a team, I think we’re improving. All of us are getting our scores up competitively. A good number of our teammates are doing it – not just a few standouts. I feel like our team is on its way.”

After the Lancaster tournament, a different group of eight Blue and Gold archers competed in the Vegas $hoot in Nevada from Feb. 3-6. Billed as “the largest and most prestigious indoor archery tournament in the world,” about 4,000 archers from all levels competed in the open tournament.

“It was a stiff, international competition that featured several shooters from other countries,” McDonald said. “Our archers shot right along where they had been shooting in practices. By the end of the tournament, they were all shooting back up to par.”

While none of MC’s archers made the podium in that tournament, McDonald said several did turn in noteworthy performances. Among those were Ann Mabry Dean, who spent much of the shoot in third place until faltering late and finishing fifth; Abigail Veidmark, who proved to be a threat throughout the competition; Dalton Moore, who made a strong comeback from a slow start, shooting 294/300 on the last day; and Jack Thomas Spears and Ben Spears, who each scored well.

“While we didn’t have anybody to place, some archers did very well in their flights,” McDonald said.

Between practices, the archers enjoyed another bonding opportunity, taking a sightseeing tour of the Grand Canyon.

McDonald said the experience his archers have gained this year will serve them well in the future.

“I’m looking forward to seeing them progress next year.”